Tweeting (or the bliss of tweets)

It had to happen, sooner or later. I have discovered the joys of Twittering or Tweeting, as they say. Like falling in love with someone you have known for a while suddenly discovering he/she has a lot more to offer than you first thought.
I opened a Twitter account two years ago, yes, two whole years ago. I chose a user name, put up a photo and then that was it. I just could not understand how it worked. I was more of a Facebook person. Then recently I went back to my old and dusty Twitter account. I spent a little while over it and finally realised that unlike FB comments, which can usually be read only by your 'friends' - unless you are one of those that make their wall public and even then only friends can comment - tweets are in the public domain -unless you lock your account. 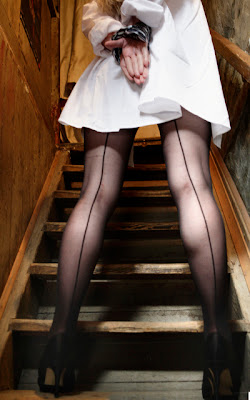 Photographer: Marcello Pozzetti
This means that you can reply to any tweet that captures your attention. Interesting. Celebrities mix with the "oi polloi", it's all to do with how funny the tweet is. Once I got that, I started tweeting and replying to tweets. I discovered the incomparable Elizabeth Windsor @Queen -UK. Her latest tweet is "Mr Clegg is on the phone. Very excited about the sunshine. Says he's filling up the Downing Street paddling pool as we speak". And of course the wonderful ModelBitch uses Twitter to comment. Where would we be without MB?

Then came the iPhone application. And now Twitter is firmly embedded in my life.  Oh no! I think I am addicted to it!

(All photos are modelled by Alex B)
Alex b