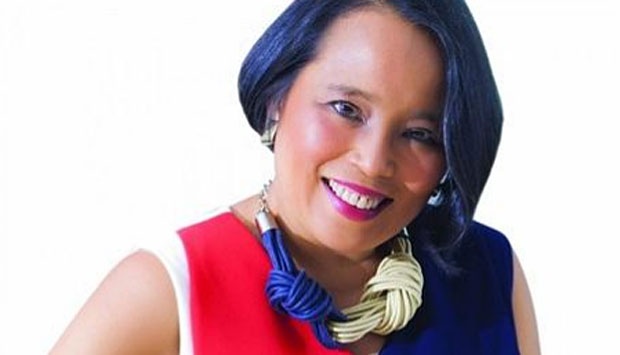 Svida Alisjabhana
With  Jakarta Fashion week kicking off on Saturday, I felt I needed some preparation. Thus yesterday I secured an appointment for an interview with Svida Alisjahbana, Chief Executive of the Femina Group, who publish several magazines including Dewi, the powerhouse behind Jakarta Fashion Week, in order to understand better the significance of this event.
With a degree in Mathematics and Economics from the University of Michigan and an MBA from Columbia, Svida is a super competent business woman with vision. JFW is now in its eighth year, still growing. Its aim is to situate Indonesian fashion on the international scene and nurture Indonesian designers' talent, through a series of initiatives and sustained training.
Thus the Femina Group, through JFW, has been involved in a programme called Indonesian Fashion Forward, with the participation of the Indonesian Ministry of Tourism and Creative Economy, the British Council and the Centre for Fashion Enterprise,  London College of Fashion, University of the Arts. IFF aims to nurture a group of upcoming designers, selected through stringent criteria,  to become world class players, through business teaching and branding strategy.
Indonesia's fashion industry is one of the fastest growing industries, with exports totalling 65% of Indonesian exports, as per figures released by the Indonesian Ministry of Tourism and Creative Enterprise. Thus it is important for local fashion to have the competence and means to compete internationally. 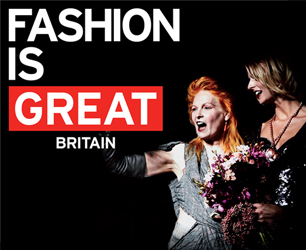 One of the images on CFE websites, featuring British designer Vivenne Westwood.

The British Council has facilitated the partnership with the CFE and has been involved in a number of projects, featuring collaborations between UK and Indonesian fashion designers. Fashion is underpinned by culture,  so this collaborative work inevitably explores issues of culture and cultural adaptation, with interesting outcomes (you can read about these projects here).
This year the British Council will contribute to JFW a talk and a discussion focused on sustainable fashion, screening  Livia Firth's documentary The true cost.  I am looking forward to it, as indeed it will be food for thought. Some of the issues explored in the documentary might seem very close to home, in this setting.

I have also had the opportunity to talk with an upcoming designer, who will be included in a group show at JFW, only twenty-four, but already well set up with her own website for online sales, with a degree in fashion marketing, trained internationally - she was in Milan and Paris. Yet she seemed to be fairly non-committal re the sustainability trend. The same designer also told me that her preferred look is 'skinny', she likes her models to be skinny, and her ideal wearer is 'skinny' even though her clientele is of different sizes. Bless her, she was honest in stating her preferences!
Body image is beginning to be regarded as an issue, because of the ubiquity of photoshopping, which can be done quite crudely, so a fashion magazine editor tells me. He also told me that in Indonesia the people who have a real impact on women and men are TV celebrities and pop stars, fashion magazines have a very select readership. For one thing the fashion magazines are expensive, so not affordable by everyone! Products other than fashion are also often advertised by celebrities rather than models.
His observations gave me a real insight. "We are not a very visually oriented country" he maintained. "Apart from a few centres like Yogya and Bali, already with a rich and sophisticated tradition of art making, which have taken on and developed the visuality of digital media to a very high standard, the visual sensibilities of the rest of the country are often shaped by the images conveyed through cheap, Chinese imported colour TV sets that can only highlight very strong colours". Thus  if the TV sets in  remote areas show strong colours dominating the clothes worn by the TV stars, everyone will think  the fashion in Jakarta is that garish and will adopt the garishness. Interesting point, it would have never occurred to me.
Indonesian designers deliberately choose models for their shows that conform to so-called 'international standards' of height and dress size, with a look that is actually fairly close to a European look - fair skin, high cheek bones, straight noses. Or should I say that the organisers of major fashion events choose such models? It is not too clear. What is clear though is that even more than in other parts of the world, models here are very far removed from average looks. Sometimes it is hard to tell  if the models are Indonesian, Korean or Russian. In their ethereal beauty, they can be indistinguishable, their bodies merging with the clothes. Like I said, there is a real push to implement international standards in all areas.

A model at designer Biyan's recent trunk show. Photo by me

Given such a context,  the September issue of Dewi magazine, with Sarita Thaib on its cover, was indeed a very brave initiative and one which demonstrates an awareness of the conversations taking place in London, New York etc about fashion images. There was no photoshopping involved and it was a way to say that it's all right to be mature, one can be beautiful even at fifty, there is no need for cosmetic surgery, which is doing rather well here among the members of the upper classes, the readership of Dewi.
What about disability and its perception? Oh, that is a minefield...