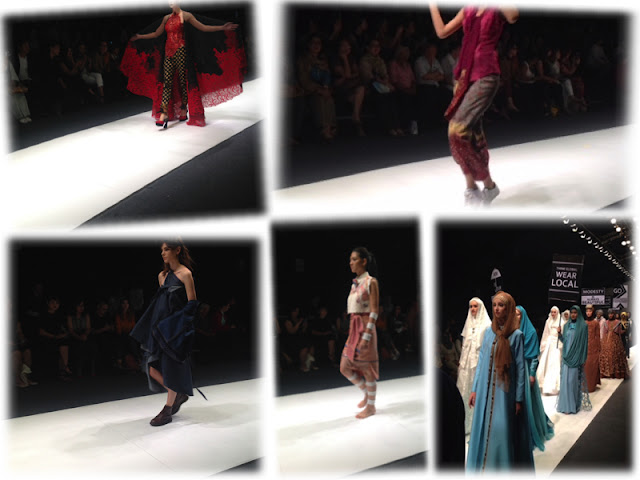 Collage of images from JFW2016

Jakarta Fashion Week is not over yet, two more days to go, including the grand finale tomorrow but I have been thinking a lot about everything I saw and heard over the past few days and can't help writing about a few things that really struck me and which I have been mulling over.
First, there is the sheer diversity of approaches and philosophies of fashion on display. Whoever thinks that Indonesian fashion is all about 'modest fashion' is very wrong. Indonesia has the largest Muslim  population in the world, accounting for nearly 80% of the overall population of the country - figures vary depending on sources - but it is not an Islamic country. Muslim fashion from Indonesia may be well known in the Euro-American world thanks to  designers like the Sumatran Dian Pelangi, fresh from a residence at London College of Fashion, and with a recent show in New York under her belt.  But there is plenty of other fashion which does definitely not make use of hijabs. Nor does this mean that its creators, who may well be themselves Muslim (as I said Islam is the dominant religion in this country) are bad Muslims for not designing clothes that include a hijab!
A footnote here will not go amiss: I know that in the UK and elsewhere Muslim fashion  is known as 'modest fashion', a term that is very  loaded,  under its political correctness, but I am translating directly from the Indonesian term which is busana Muslim, that is, Muslim fashion.
I do not think the Indonesian busana Muslim is necessarily a strong religious identity marker as such: the more I see it, the more I perceive it as just a fashion, and only one of many trends. Thus I am wary of the way it is being construed outside Indonesia and it troubles me that it colours the perception of lifestyle in this country with just one hue. Indonesia is not Saudi Arabia. It has a richness of cultures (note the plural) and this is not only acknowledged and more or less respected by the Indonesians themselves, it is also important that people outside Indonesia should be aware of this diversity.
There is nothing like fashion to allow for  an expression of diverse creativity, as fashion is, as I noted elsewhere, underpinned by culture. 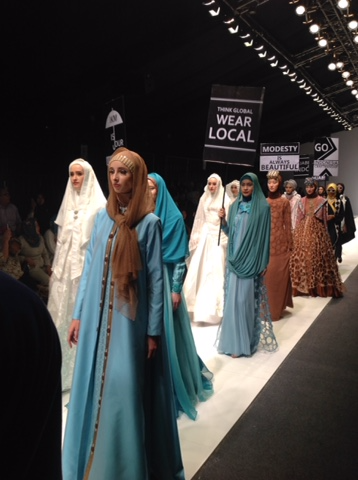 The other important issue that was raised in the context of this fashion week is that of sustainability. The film produced by Livia Firth and Lucy Siegle, The True Cost, was screened. Siegle was here, courtesy of the British Council, to lead discussions and for a press conference. Sustainability is very much on the British Council's agenda here in Indonesia,  the UK seems to have taken the lead in questioning current models of fast fashion production and the impact they are having on the environment and the life of individual consumers.  An impressive undertaking to be genuinely applauded. 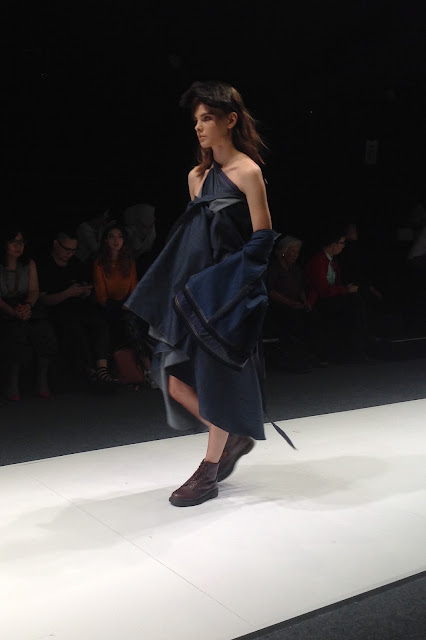 JFW: it's not all about busana Muslim
I went to the events and really wanted to hear the views of the people attending them. There was a huge elephant in the room and everyone was careful not to acknowledge its presence, not even Lucy Siegle ventured into that area, even though in her day job, as she put it, she is an environmentalist. I guess being an official guest can sometimes put one in a very difficult position, unsure of what can and should be said.  Indonesia at the moment is going through one of the worst possible ecological disasters, the haze from its burning forests, in Sumatra and Borneo, with  millions of people affected  with respiratory disease. It is connected with palm oil and the slash and burn policy.  It is not  only about peatland, that would be taking an extremely narrow view. Is fashion  implicated in this chain and at what point? Well, what do you think? What are the many uses of  palm oil? 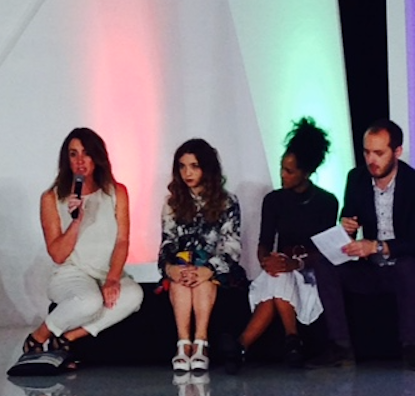 Lucy Siegle at the Press Conference on sustainability, with LCF students and Adam Pushkin, British Council
Yes, fashion could certainly begin to mark a change, were it to embrace sustainability, making those all important decisions concerning the environment - the current ecological disaster  is not just an Indonesian matter, we live on the same planet. But how can sustainability be implemented? This is the question some people have asked.  Education and training are paramount. It is not just a matter of going back to using natural dyes, as Jakarta Post journalist Lynda Ibrahim points out in her blog. A  lot more dots need to be joined.
I have a great deal more to say on sustainability and diversity,  how the two are and can be connected, and the issue that is dear to my heart, that of representation. But all this will have to wait for now, as I have to get ready to attend Day #6 of JFW.

(All photos of varying quality, including iOS uploads taken  by me unless otherwise specified)
Posted by Alex B. at 05:01:00