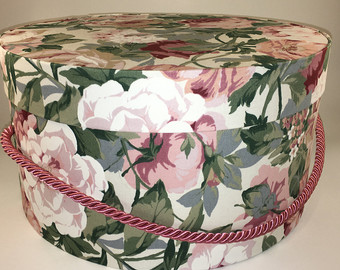 Christmas is round the corner, in only two days,  and this means I need to do quite a bit of tidying up and sorting, as I will have (unexpected) guests.  I live in a very tiny flat and tend to store in boxes what I do not immediately need, promptly forgetting the content of each box. And so it was that I found, under a pile of other boxes,  my long lost hat box which is however quite impractical as it does not hold that many hats at all, but it is very  pretty. It's back in use, now, with only one hat in it.
And then I found the catalogue of an exhibition I went to see in 1997 at the Queen's Galleries, of the beautiful Padshahnama (Chronicle of the King of the World), now in the Royal Collection Trust. The Chronicle  narrates events related to the reign of the emperor Shah Jahan, who lived in the late 17th century. He is the one who built the Taj Mahal at Agra as a tomb for his beautiful wife Mumtaz. The Chronicle  includes forty four splendid miniature paintings, made by the very skilled and talented artists employed at the court of the emperor.
The paintings went on display in a special exhibition in 1997 and I was one of the thousands that queued up to see it.  They were breathtaking, with their vivid colours, richness of detail, all executed by true masters. 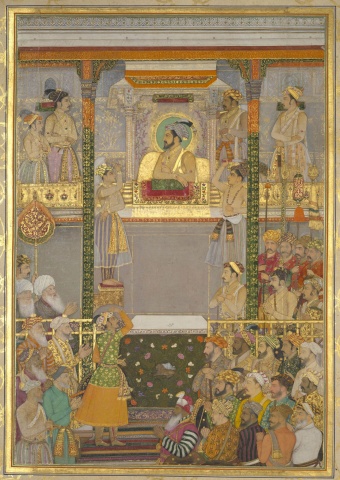 Padshahnamah
These days some people carry such a negative view of Islam as to forget all the wonderful things that the Muslim world has given us by way of art (as also science, but that's a topic to be explored in  another post). Mughal painting from India is one of such gifts. The Mughals were enlightened rulers and great patrons of the arts. During their time painting flourished as also architecture and the art of carpet making - South Asian carpets of the Mughal era are  distinct from those of Persia and equally beautiful.
I am a great carpet lover, a passion I inherited from my father who was a collector. I do not own any antique carpet but I do have one of my  father's, which used to be in my bedroom when I was a girl and  is now in my flat. It is an Ardabil style carpet, a distant and poorer relation of the superb Ardabil currently housed at the V&A.
Finding the catalogue of the Padshahnamah exhibition was such a wonderful moment. I began to leaf through it and marvelled again at the sheer beauty of the illustrations. There are portraits - the Mughals were fond of them, having learnt to appreciate European portraiture which had been introduced to them by the Christian missionaries. There are court scenes with the women delicately drawn in all their finery. There are images of animals and flowers, executed with great precision.
I think I know what I will do over the long Christmas vacation,  I shall visit the London museums where I can view some of these wonderful miniatures.
And I shall go to the V&A to admire the Ardabil.
Meanwhile I take the opportunity to wish you all a very happy Christmas!