on April 14, 2020
I originally wrote this piece soon after London Fashion Week  2020 for Goldie magazine. However, with the lockdown currently in place due to COVID19, for the time being, Goldie is not being printed.
So I am posting the original article here, with only a couple of edits. 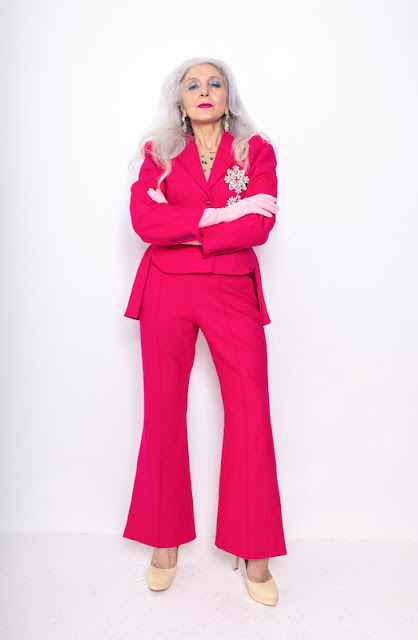 me for Conflict of Ego

Year in, year out, we read articles about lack of diversity in fashion, especially in terms of age representation, urging designers to be more inclusive and to have more older models in their shows. Many designers do try their best to be inclusive, but they often prefer to play it safe and only have well known ‘older’ faces walk for them. Fashion week shows are expensive, designers pay good money for a slot and want everything to go smoothly. Relying on a known model or a celebrity, of any age, can enhance the popularity of a show and of the collection presented.
Diversity is a complex issue and within it, age and ageism are a minefield.
When I started modelling, in my late forties, there was almost nothing available for older models, not in fashion and beauty: it was all about commercial work, replete with stereotypical grannies. The trend continues - come Christmas, you will see more and more grannies in ads; ever since I turned 60, I have done quite well, appearing in several Christmas campaigns, as an honorary grandmother.
However,  over the past decade, slowly but steadily, older models have begun to be more visible, not just in magazines aimed at the forty/fifty plus section of the population, but also in fashion magazines whose readership ranges, age-wise, from 18 upwards.  Some brands seem to have gone out of their way to include older models, of both genders, in their look books – JD Williams, H&M, Lindex, Gucci, even Sweaty Betty and Athleta, which do fitness wear, come to mind. Some brands purport to have intergenerational clothes – and their look books reflect this attempt at inclusion. Rixo, for example, has had a policy of inclusivity from inception, often relying on older female customers to model alongside younger professionals, in an attempt to emphasize an intergenerational approach (why non-professionals? Well…  it is often a cheaper option).  The Bias-cut.com, an online boutique that celebrates all ages, also relies on non-professionals, who do it to gain greater experience and build up a portfolio. A few then go on to model professionally. 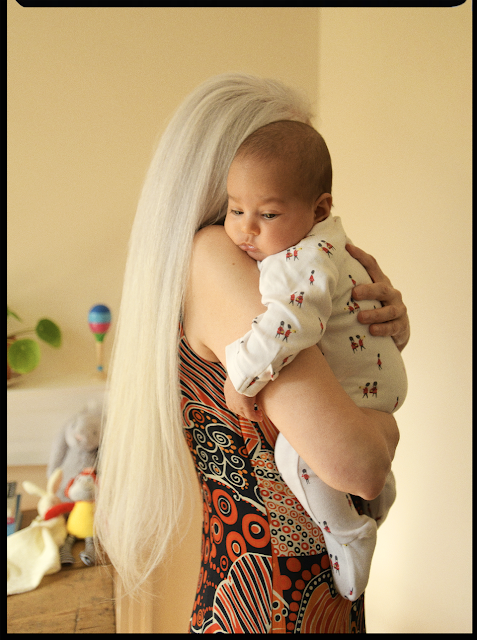 With my granddaughter Livia for Rixo, celebrating Mother's Day

I am a ‘glass-half-full’ person; you have to be if you are in my line of work or you would spend your days crying your eyes out. I firmly believe that there is a genuine effort among designers, and the fashion industry, on the whole, to serve a wider age range and not to unduly differentiate between young and old. I do believe we are witnessing major changes. Education has done its bit; young designers have been trained to develop an awareness of diversity and its attendant issues and have a better understanding of the body and its ageing process.
Ageist attitudes may continue to be rife, at an individual level - at a recent casting for a London Fashion Week show, a young designer rather than routinely accept my comp card and that of a fellow older model, felt the need to say she did not want older models in her show. It was quite unnecessary, she could have just taken the cards and not selected us, a standard behaviour, but she felt the need to articulate her disapproval, unwittingly coming across as biased.  Maybe it was a language problem and all she meant was that on this occasion her collection was really geared towards younger people. No matter. Her statement seemed very blunt and pointed to the fact that age-insensitive language is so common that people do not even realise they might be saying anything that could be construed as ageist.
Yet, at that same casting where my card was declined, a handful of older models turned up (why only a handful is a different issue) and they were all hired, including me (though I stepped in only when a first option was no longer available). Yes, models have to get used to being second-best!
Designers do have a vision when creating a collection and their vision for the clothes they make must be respected; on the other hand, they should be encouraged to broaden their horizons. Having a few pieces in a collection which can be worn, with adjustments, by older women (and men) does not mean the collection is going to be ruined; on the contrary, it would highlight a designer’s creativity and versatility.  That’s where styling comes in…
Much pressure is put on designers to tick boxes. But no model wants to be hired as a tick box.
Soon after images of the LFW shows went up, it was interesting to observe the reactions, especially on social media. Some felt the number of older models at LFW was still far too low; that the clothes were unsuitable to older women; and also, that there was a tendency to go for slimmer older models rather than curvy ones.
All this raises interesting questions on what it means to have an intergenerational approach.
But let's retrace our steps.
What is intergenerational fashion?
Intergenerationality refers to relationships between generations, which can often be strained and difficult; it does not have to be that way. An intergenerational fashion is one that does not discriminate between the young and the old. It is not a fashion that ignores the specificity of being old or of being young, on the contrary. The idea is to break down the barriers that exist between generations – I recently did a shoot for Conflict of Ego, a brand that makes intergenerational clothes. There was a pink suit that I wore and immediately afterwards,  it was worn by a much younger model. The same outfit, but different styling. It worked.
Older women, even more so than older men, often feel invisible and fashion can help them reacquire visibility, at the same time fostering a better relationship with women of a different generation than their own. 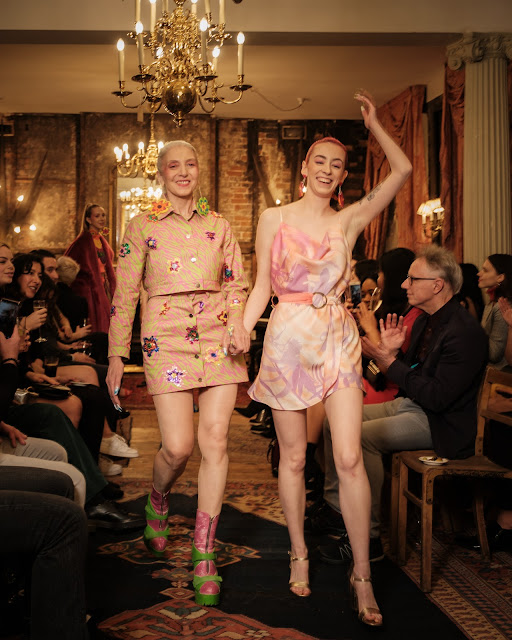 Many young designers are happy to make clothes to be worn by women and men of different generations.  Laura Shannon Harding, designer and also occasional model, at a recent fashion show, a charity fundraiser, asked me to model one of her very bold designs, a mini-skirt with matching jacket. At first, I was reluctant, feeling too old for it. I even asked whether by any chance I was a last-minute replacement, believing Laura had not thought it through.  “No way. I knew exactly that you were modelling for this event and knew what to give you. My clothes are for bold individuals, not afraid to stand out. I chose you as one of my models, please wear it”. I was persuaded and did, complete with colourful boots (but I asked I’d be allowed to wear nude tights). Later, I felt quite elated.  I, an older woman, had been asked to show off one of Laura’s bold designs! She did not hesitate, she felt her clothes could be worn by an older woman.
I may not wear Laura’s minis every day,  but there might be occasions when her clothes will be just right – again let’s not forget that styling always gives you the option to adapt clothes. 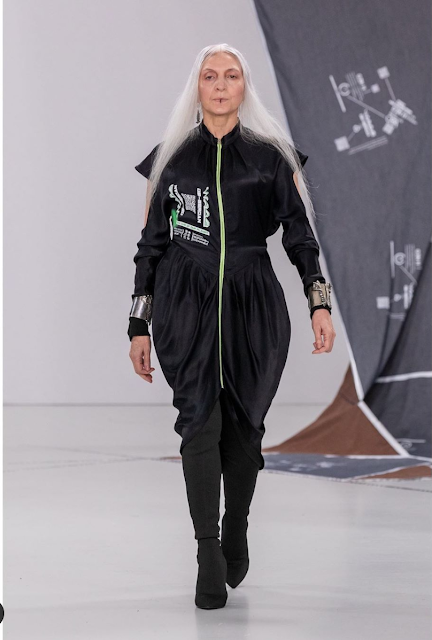 For DB Berdan LFW2020
We want to see models of all ages, all body sizes and all ethnicities at fashion shows, proving that fashion is truly for all and can be enjoyed by all. We want designers to set aside their prejudices and any conventional wisdom they might have been taught as part of their training and believe that their clothes can be shown off by a range of body types and ages. Representation matters: we want to see models that reflect different demographics.
Ideally, we want to focus on the clothes, not on who wears them, though admittedly, it can, at times, be difficult to separate clothes and their wearers – but separation is the goal.
And here is my ‘glass-half-full’ take: we are getting there, so let’s celebrate this moment of intergenerationality in contemporary fashion.

Soon after I wrote, the coronavirus required a complete lockdown. I wonder what it will be like when things 'go back to normal'. There will be other concerns, no doubt, which will have to be prioritised. I also feel that the emphasis will be on youth and renewal and fashion will reflect that.
Anyway, I thought I should post this article as it gives a sense of where we were at in early March. What will happen next? We just have to wait and see...