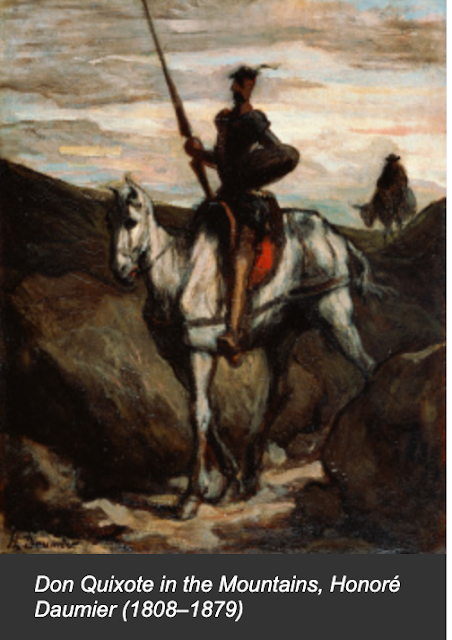 Don Quixote is a guest that stays with you for quite some time,  not only in terms of how it shapes your thinking but, also, in a very tangible and physical sense, as the book cannot be read hastily.  Thus it will be with you, in your living room, your bedside table and wherever else you choose to rest it to pick up the narration.
I am still at volume 1 (almost finished) but am also reading around it, which is slowing me down as well as giving me food for thought. I am also reading, simultaneously,  Quichotte by Salman Rushdie, which I earlier described as a novella, but which is, in fact, a two-volume novel, bringing Quixote to contemporary America, as a retired salesman in love with love who names himself Quichotte, à la français (more about Rushdie's version in another post).
I have also read Lennox's The female Quixote, which I mentioned in my earlier post, and in which Quixote becomes Arabella, an 18th-century wealthy woman who sees herself as the heroine of one of those French romances set in the era of chivalry which was her staple reading, constantly reinterpreting reality in accordance with her imagined world.
And... I have finally been able to watch The man who killed Don Quixote in its entirety.  I enjoyed it and I totally disagree with those critics who have reviewed it negatively. It is not an adaptation of Cervantes' masterpiece, it is inspired by it and by a twenty-five-year long engagement with this extraordinary novel, retaining its magnificent chaos, flights of fancy and at times raucous humour but clearly changing the storyline to suit contemporary viewers. 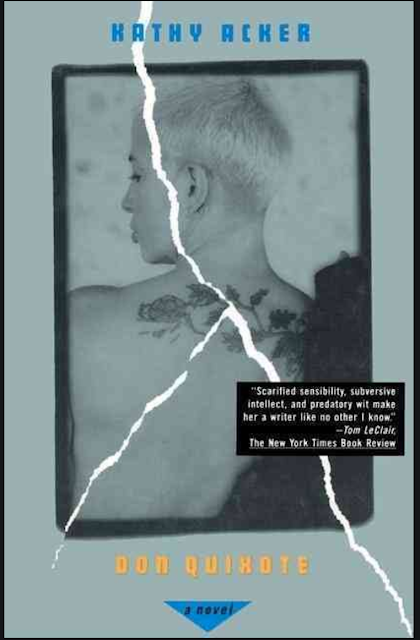 Next on my list is Kathy Acker's Don Quixote which was a dream, in which the Don is again a woman who becomes a knight to defeat "the evil enchanters of modern America". I have ordered it, after reading Victoria Tomasulo's critical appraisal and am waiting for it to arrive in the post. Can't wait to get started!
As you can see,  I am quite taken with Don Quixote. And, in truth, who fails to fall under the spell of the Don? The more you read this book, the more it strikes you as relevant, so utterly contemporary - the speech made by Marcela, for example, who claims independence of action and thought and refuses to bow to men, choosing not to marry, is unexpected and very heartening, endorsed by Don Quixote, rather than being condemned.  (See the exhibition by Google Arts on the female world in Don Quixote) 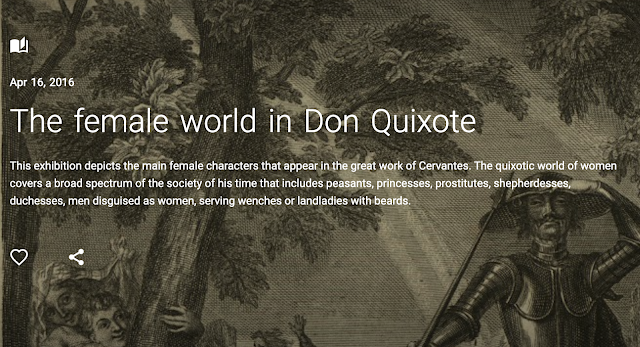 I disagree with those who attempt to place a proto-feminist tag on Cervantes, but I concur with Edith Grossman who in 2004 translated Don Quixote into English, a new translation to mark the 400 years anniversary of the novel. The last in a long line of translators, whose work began as soon as the (great)work was published, Grossman who has clearly engaged with Cervantes in great depth, believes that to think of him as a proto-feminist is rather over the top but acknowledges that his female characters are often presented as strong women eg the above mentioned Marcela.
Personally, what intrigues me is how Don Quixote is a novel about books and reading, thus I am inclined to reflect on the transformative encounter one has with literature.
Don Quixote begins by asserting it is a book about other books (and their pernicious influence). I am reading it as a woman of my own time and obviously, I notice the values and conventions contained in a work of literature of this magnitude, and am overall aware of how these have, historically, been shaped by men. Cervantes is a 16th-century man, there is no doubt about it.  I cannot but be struck by the portrayal of the characters, both female and male, the complex language of the text, the attitude(s)  of the author and the relationship between the characters as also  the comments the author seems to be making about society as a whole. 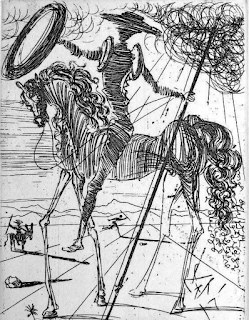 But most of all  I am fascinated by the role of fearless quester embodied by the Don.  I ask myself about women taking on that role as writers: through the evidence I have cited - there are many more examples, I can mention here the Italian author Elsa Morante, also discussed by Tomasulo -  women seem to have been in a quixotic pursuit of self-representation in an androcentric universe, in ways that invite a reflection on the relationship between life and literature, as noted by said Victoria Tomasulo.
However, I am still grappling with the real meaning of 'quixotic' and ways in which it can be applied to my (day-to-day) existence - is my quest to subvert warped perceptions of beauty and age quixotic? Am I tilting at windmills?  I am not, as yet, able to answer. It remains to be seen how Covid19 will change our priorities.
#Quixote #Quichotte #quixotic #literature #reading #criticalengagement #lockdown #lockdownsurvivalstrategies #alexb244