Do you remember Carrie Bradshaw in Sex and the City reading out Mr B's letters from a collection entitled Love Letters of Great Men? Well, the book does exist,  there are two volumes of these letters, one edited by  John C. Kirkland and one by Ursula Doyle.  I recently stumbled on the letter by Ludwig van Beethoven mentioned  by Carrie Bradshaw and I felt an intense curiosity to browse the letters written by the other great men, from Napoleon to Goethe and Lev Tolstoy. So I bought the book from Audible.
As I am writing this, I am listening to the audiobook. These men definitely bared their souls to their beloved with page upon page of stirring prose, revealing the depth of their emotions.
Do people write love letters these days? I am not sure...people exchange messages, emojis and memes, and photos, plenty of them, but old fashioned love letters? I do not think so.
Yet, who would not want to be addressed as Beethoven does his beloved? "Even when I am in bed my thoughts rush to you, my immortal beloved, now and then joyfully, then again sadly, waiting to know whether Fate will hear our prayer — To face life I must live altogether with you or never see you…" 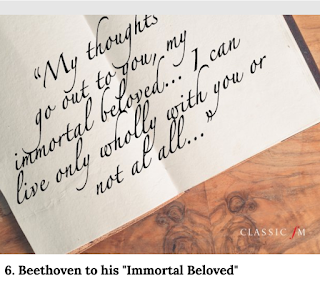 Have I ever received a love letter? Now that I think of it, no, I did not, certainly nothing like one of these missives. (Big sigh).
All right, I did receive billets doux from spotty schoolboys when I was an awkward schoolgirl (littered with mispellings and grammatical errors, which never left a good impression and was the object of endless mirth when I shared them with my girlfriends  - note to would-be love letter writers: please make sure your prose is flawless).
Then as an adult, for years I punctually received on my birthday an anonymous card with a (very bad) love poem, often a rehashing of a Shakespearean sonnet, which had the effect of putting me off entirely and again made me laugh.  I knew who was sending it. I finally joked about such poems with the 'anonymous' author who never actually admitted to being the sender and I never again got another one. I later thought that maybe I had been a little cruel, however, I could not bear getting those cards!
But letters such as the ones collected by Kirkland, no, I never got one. I guess I have never been the object of such overwhelming passion (now I do feel somewhat slighted). And no, I have never met a Beethoven or a Napoleon or a Lord Byron... I am definitely not an exalted muse.
Yet as I read (listen to) these letters, I cannot help feeling that yes, they were addressed to their beloved (in Beethoven's case it has been suggested his Immortal Beloved was actually his music, not a woman) but these men were also thinking of people who might come across their letters in the years to come. In other words, they were written for posterity. And there is a strong element of narcissism, in the way these men announce, often with fanfare,  the strength of their passion and how devastated they are, unable to endure separation.
Then, when you read what King Henry VIII writes to Anne Boleyn whom he subsequently did not hesitate to behead, you feel a little queasy as you think of her fate (incidentally do read the magnificent Cromwell trilogy by Hilary Mantel, it is definitely worth the effort).
"1528, London. My Mistress and Friend, I and my heart put ourselves in your hands, begging you to recommend us to your good grace and not to let absence lessen your affection...For myself the pang of absence is already to (sic) great, and when I think of the increase of what I must needs suffer it would be well nigh intolerable but for my firm hope of your unchangeable affection..." 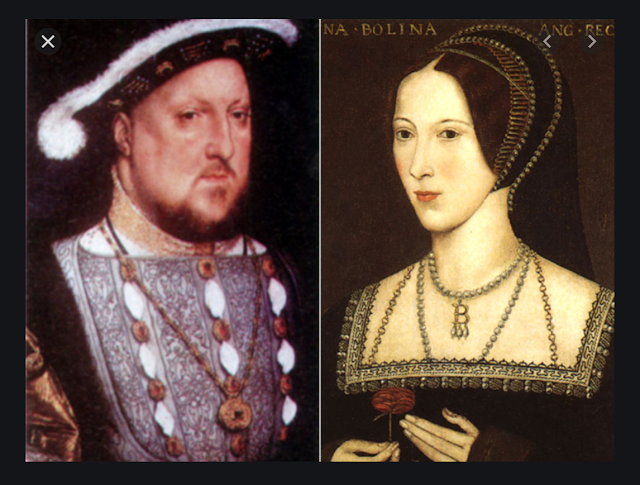 I would like to introduce, as a counterpoint, another set of love letters, the ones written by the octagenarian Mrs Piozzi aka Hesther Lynch Thrale, at one-time a friend of Samuel Johnson with whom she fell out when she married the penniless Italian musician Gabriele Piozzi.  At the age of 80, she fell in love with William Augustus Conway, at least 48 years her junior, and embarked on a one-sided love affair with him, writing him beautiful letters that Conway kept until he died (by committing suicide). Mrs Piozzi was well regarded on the literary scene. When she fell in love with Conway she was always aware of their age difference and wrote poignantly about her feelings. Her letters are wonderful, yet immensely sad. I would recommend reading them. 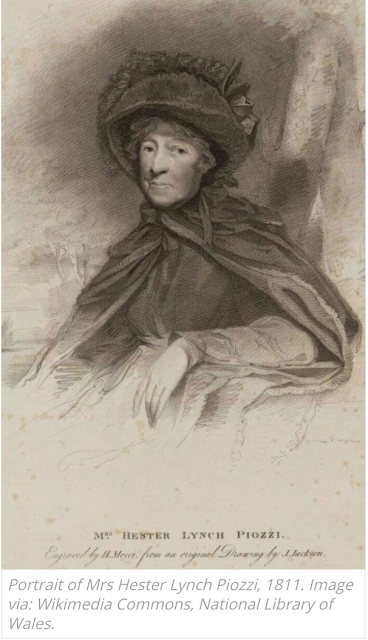 Even today older women loving younger men are not regarded kindly.  If there is anything to learn from Mrs Piozzi is that love transcends age. Hesther is admirable because she refused to be constrained by social norms.
Regardless of your own age and that of your lover, it is important to acknowledge that growing old does not imply a loss of feeling. Thank you Hesther Lynch Piozzi, from the 21st century,  for your wonderful lesson.  Love, like beauty, is ageless.
Posted by Alex B. at 20:39:00