'Laocoön is the name of the figure' 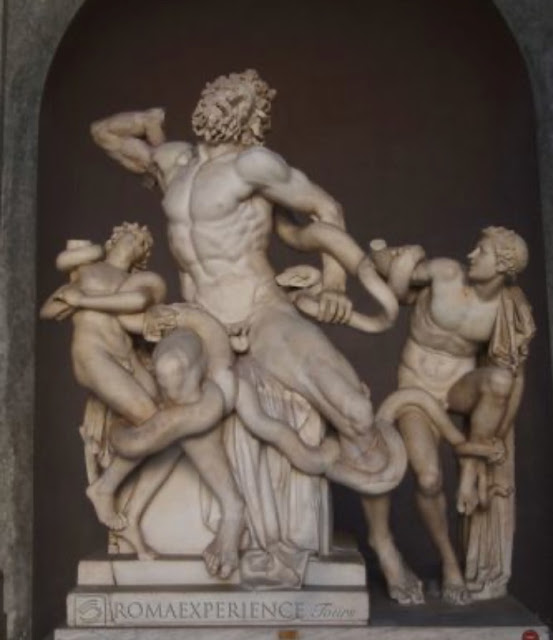 Like millions of people around the world and across centuries I have always been awed by the Laocoön and his sons marble in the Vatican, attributed to Agesander, Athenodorus and Polydorus of ancient Rhodes. The agony of the two young sons attacked  by the serpent demons is palpable and Laocoön vain attempts to fight the serpents off only magnify his suffering.

The myth is well known, recounted by Virgil in the Aeneid: Athena conjured up the serpents when Laocoön tried to persuade fellow Trojans to burn the horse left by the Greeks on the seashore. The Trojan priest utters his famous lines: "Timeo Danaos et dona ferentes" (I fear the Greeks even when they bring presents), a warning not to trust those who are notoriously untrustworthy (such as Odysseus, the most treacherous among the Greeks). In other versions, the serpents are sent off by Poseidon, whom Laocoön had deeply offended. 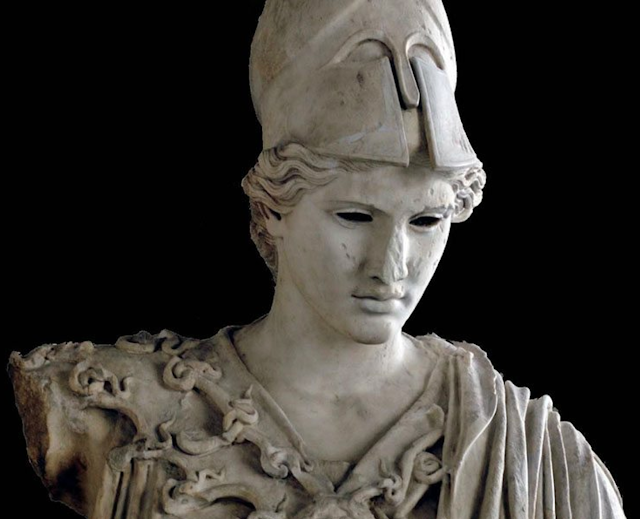 Bust of Athena, copy of a bronze by Kresilas

The myth can also be given a metaphorical meaning. The serpent demons are our own demons coming out and suffocating us. To me, the Laocoön has often been a signifier of my own inner landscape and the sense of choking always felt very real, just as it is so masterly depicted by the Rhodian sculptors.

The Trojan horse. Movieclip from Troy

Recently, I came across a beautiful reprise of the myth in a poem by the American  Marge Piercy , also known as a feminist novelist, as part of the collection Stone, Paper, Knife (1983) which is about the loss of an old love and the beginning of a new one, partly autobiographical (or at least drawing on the intensity of her experiences), articulating the emotional spectrum of a failed relationship in an original poetic voice, rich in imagery.

"That sweet sinewy green nymph /eddying in curves through the grasses: /she must stop and stare at him. Of all the savage secret creatures/ he imagines stealthy in the quivering night/, she must be made to approach, /she must be tamed to love him./ The power of his wanting will turn/ her from hostile dark wandering/ other beyond the circle of his/ campfire into his own, his flesh,/ his other wanting half. To keep her/ she must be filled with his baby/, weighted down./

Then suddenly /the horror of it: he awakens, /wrapped in the coils of the mother,/ the great old serpent hag, /the hungry ravening witch/ who gives birth and demands, and the lesser/ mouths of the grinning children /gobbling his substance. He/ must cut free.

An epic battle /in courts and beds and offices, in barrooms and before the bar /and then free at last, he wanders. There on the grassy hill, how the body moves,/ her, the real one, /green/ as a Mayfly she hovers and he pounces."

It is a  powerful reworking of Laocoön  as a  metaphor of the feminine and of the relationship between the sexes.

"I think I pretty much exhaust much of my impulse toward autobiography in my poetry" says Piercy. And , as a piece of advice to would-be poets, she adds "Hold on to your politics and your identity. Don’t take critics seriously. They are always building their aesthetic on what has been done, not on what you want to do".
Even more to the point is what she writes in an article for the Poetry Society of America:
"Sometimes when students call me up or send me emails that ask, what does this poem mean? I despair. I say it means what it says, what it says in words, in sounds, in rhythms, in silences, in images. That's what it means".
This is precisely why a poem such as 'Laocoön is the name of the figure' immediately works. I read it, enjoy its  musicality and am able to superimpose the anguished image of the Vatican Laocoön onto Piercy's words. And I weep, as it resonates and touches me, the reader, to the core.
Posted by Alex B. at 14:52:00