The myth of Marilyn's size 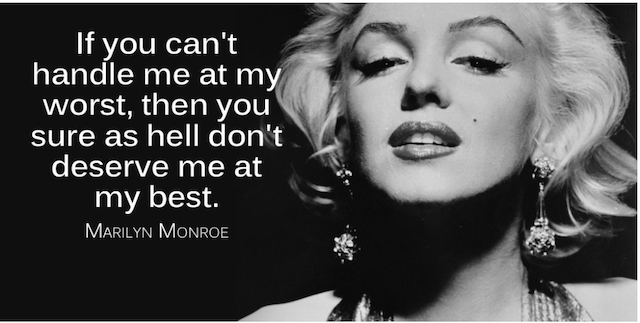 I had a conversation this morning with R***, an old flame whom I did not realise I had deeply offended (well, conversation via text,  all of us don't seem to use the phone much these days, except my sister and I, who are constantly calling each other).
I have known this guy for so long, since the early 1990s, and have had epic fights with him, some of which have crept up in past blog posts, with me duly changing details (I am mindful of other people's privacy and right not to be recognised).
I take it for granted I can say to him anything that crosses my mind, especially now that we have long gone our separate ways.  To me, he is a friend. But obviously, I must have overdone it,  because for months he gave me the silent treatment and finally responded only today to a birthday wish message saying he had forgiven me after 382 days, which totally miffed me.
I asked for details - what did I do? -  and got no reply, so I sent him a quote from the one and only Marilyn, the one in which she said " I am selfish etc etc. but if you can't handle me at my worst, you do not deserve me at my best".   I am very fond of this quote and I occasionally send it to people, in fact, I sent it to someone else too, also recently -  and if YOU are reading this, do not be so vain, as Carly Simon allegedly sang of Warren Beatty, this post is not about you at all!

Anyway, the Marilyn quote elicited a response and we got involved in the silliest possible argument about her death, which my friend maintains was a murder, and I tend to believe was a suicide, as the official version goes, the desperate act of a troubled woman who took too many barbiturates. In those days doctors would prescribe them like sugar candies to everyone and anyway, a movie star of that calibre would not have trouble in getting them.  Said friend and I could not agree on this, so we ended the conversation (and hopefully I will not be given the silent treatment for another 382 days. I think this explains why we never managed to be together for longer than a few months, infatuation notwithstanding).
As a result, Marilyn was very much on my mind for the rest of the afternoon, so much so that I began to read about her.  Her impact on contemporary popular culture has been phenomenal and my take is that dying when she did and the way she did, magnified her and really turned her into the legend that she is. Much has been written about her, her struggle with depression, her sense of being unloved, her love affairs, her failed marriages, her discontent, her desire to be taken seriously. A recent biography by Charles Casillo puts her in context,  highlighting that she suffered from bipolar disorder, which was unknown as a condition at the time and the miscommunications that led to her tragic death.
But I also came across a range of articles that discuss her size. These are most bizarre. It was comedian Rosanne Barr who began saying that Marilyn was a size 16 (today's size 16!) . You should not trust a comedian to tell it like it is!  Somehow it has stuck and it did not help that Liz Hurley said she'd rather kill herself if she had been as fat as Marilyn.  Liz Hurley never struck me as capable of saying anything remotely engaging, therefore I will not comment on her pronouncement.  But this idea that Marilyn was big is ludicrous. She was slim and well proportioned. Today's sizes are not those of the 1950s and today's bodies are definitely different. Marilyn had a 22-inch waist, without a girdle, which is incredibly small by today's standard (I am a  size 8 and my waist is 26 inches).  She had the perfect hourglass figure, with 35-inch hips and 35 bust. She had a bosom, definitely, it seems she had a 36 D cup. But she was not a size 16! She was also 5'5.5 in height, which is on the small/medium side by today's standards but was above average in the 1950s. 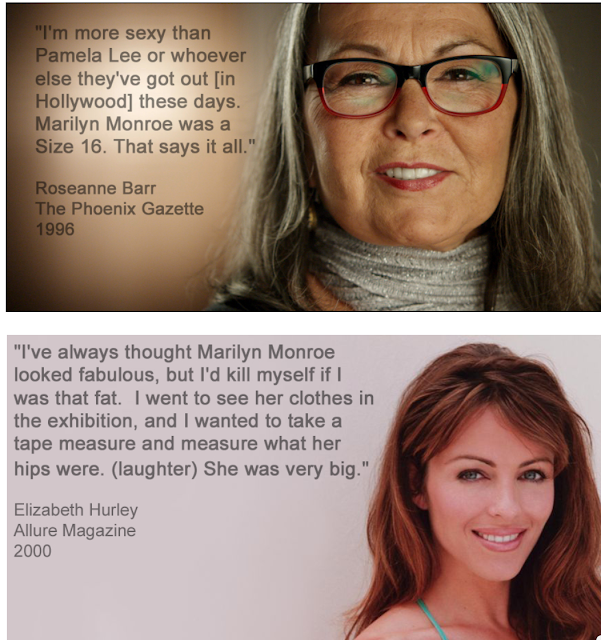 There are thousands of pictures of Marilyn, some of her naked and one can see she was not at all big.
I wonder why people have started this rumour. My take is that in an attempt to establish being large as normal and counter negative body image and weight-based discrimination, it may have been helpful to reclaim an icon of Marilyn's renown to breathe greater confidence in women (and men) who are trying to overcome the stigma of being chubby and corpulent.
At the end of the day, Marilyn was Marilyn. Immortalised in fashion, in art, in music she will always be as paradigmatic as Helen of Troy was in antiquity. Her size pales into insignificance, what stays is the image of this beautiful and troubled woman, whose wit and intelligence were never sufficiently recognised. It begs the question: would you want to be Marilyn Monroe? 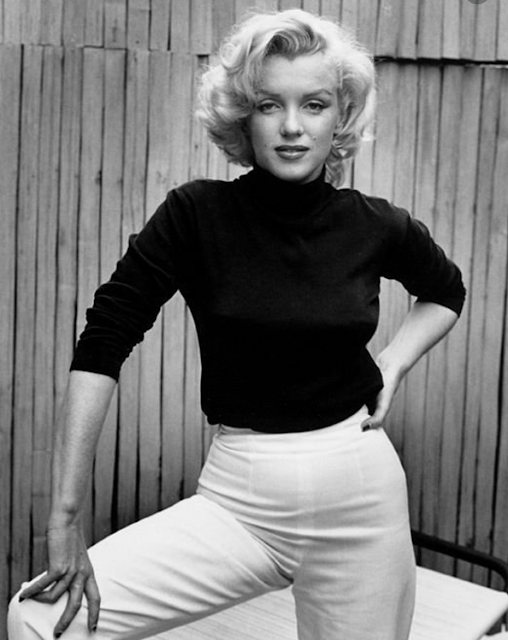