Cemeteries and 'correspondence of deep affection'

I have been visiting some of the 'Magnificent Seven' cemeteries, all of them dating from the Victorian period. I have already been to Highgate and to Abney in Stoke Newington. Next on my list is Brompton, where my 'spiritual mother' - I call her so - the Divina Marchesa about whom I wrote in an earlier post, is buried.  Most fashion designers hail her as their muse, and recently Indonesian fashion duo Sebastian Gunawan and Cristina Panarese conceived a whole show inspired by and dedicated to her.

I am fascinated by Victorian cemeteries and am revisiting them all, taking in everything afresh.

Cemeteries were what Graveyard poets of the late 18th century sang of and their influence on the Romantics was massive, the common thread being a reflection on emotional states - think of Coleridge and Keats. And of course Gothic literature has its roots in Graveyard poetry.

The fascination with cemeteries and old graves is known as taphophilia and visiting cemeteries is also referred to as necro-tourism. Please do not be put off by this term and imagine anything sinister. It simply means visiting cemeteries 'with the aim of discovering their artistic, architectonic, historic and landscape heritage, apart from knowing legends of death' and it is none other than a form of cultural tourism.

Archaeologists deal with death all the time. They study death and memory, they investigate the material culture of burials, trying to understand how past communities and individuals remembered their past  through social and ritual practices and how important mortuary practices were in such processes of remembering, and also forgetting, the past.

The Italian poet Ugo Foscolo, who lived in exile in London from 1816 till his death in 1827 wrote a celebrated poem entitled Sepulchres intending it to be a protest against Napoleon's decree which forbade tomb inscriptions in an attempt to erase social distinctions. In the poem, Foscolo talks of a 'correspondence of deep affection' (corrispondenza di amorosi sensi) between the living and the dead which is facilitated by marked burials as opposed to common graves.

Hannah Malone (2017) believes that  the feelings of the Italian elites towards cemeteries were  influenced by  British Graveyard poetry, which "sensitised" European aristocracy to the notion of burial within the landscape "paving the way for the eighteenth  century Elysium or the idea of a garden with tombs and cenotaphs that emerged in England as the precursor to the modern landscaped cemetery".  However the Italian variant of  Graveyard poetry, such as the poem by Foscolo,  had a distinctly civic and social value which would be directly linked to the Risorgimento movement, whereas British poetry was more focussed on private feelings, introversion and nostalgia.

When I visited Abney, on the day of Prince Philip's funeral  I wrote the following on Fb :

"Abney is not far from where I live...Today I strolled around and took photos with my phone. It is smaller than Highgate and the main difference is that it is a proper park, with no entry fee. People come in and sit by the tombs or on the benches, eating sandwiches, or they do a bit of jogging. Some people look at the tombs and statues with interest, there was a small impromptu tour today and I joined from a distance, and there were a few toddlers playing hide and seek with their parents. Various signs remind people that Abney Park's wildlife is exceptional and care should be taken to observe specific insects/birds/plants. And everywhere there are tombs, some with fresh flowers on them because it is a living cemetery. I love the fact that it is so alive, a place for the living to enjoy, not just to visit when in mourning. Respectfully, of course, just like we do when we visit churches, without necessarily wanting to worship, but only to admire the artwork. I really enjoyed visiting Abney Park. Highgate overawed me, Abney Park made me wonder at how the living and the dead are intertwined, life and death are a continuum. Apt thoughts, on a day when the nation is in mourning". 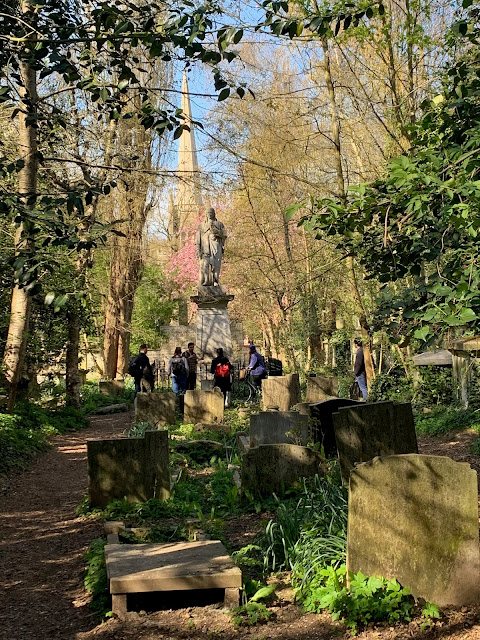