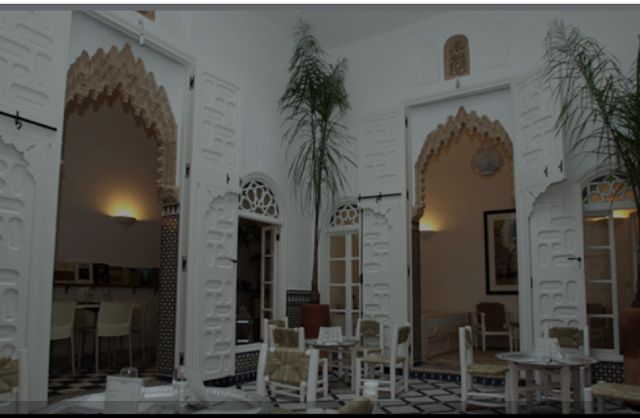 (I thought no one read this blog - someone whom I sent a link to a post of mine told me with a sneer that blogs are passé so he would not read it. Amen. But it turns out some people do still read my blog, so I feel encouraged to post. I am not talking to a wall, clearly).

When I was last in Morocco I stayed in a Riad in Rabat Medina. It was called Riad 'Senso'.

I blissfully had the Riad entirely to myself almost up to the end of my stay, until another guest had to be put up there, to my immense chagrin, as I really enjoyed being the only one there, and this unwelcome intrusion (it felt like that to me, initially; I then changed my mind) deprived me of the use of the best bathroom, not to mention the freedom to explore the Riad as I wished, in a state of semi undress - I was alone, so it did not matter what I wore.

The name of the Riad was  'Senso' which everyone pronounced with a stress on the final o, in a French fashion. Why 'Senso'? It sounded bizarre, very un-Moroccan.

I realised the connection with  Luchino Visconti's masterful movie Senso when I explored the Riad on my first morning there, which happened to be a Sunday  - oh the bliss of those Sundays when I could just go up to every room, try out any bed, go up to the terrace and enjoy views of Rabat with no one around me! - and saw a huge poster of Visconti's movie, hanging on a wall on the first floor, by the lounge. I recalled that the owner of the Riad had an Italian connection. Clearly, she was an admirer of Visconti's work.

I too love Senso. Visconti is a master, and everything in the movie is well thought out, with his usual penchant for detail. It is not as good as The Leopard, which remains, IMO,  one of the best movies ever made, but Alida Valli is very good in the role of the Countess who falls in love with an Austrian officer, way younger than her, and betrays the Risorgimento revolutionaries, to whom she was linked - it is set at the time of the Third War of Independence - by giving their money to him so that he could bribe a doctor to be exempted from fighting. He then discards her and humiliates her and she exacts her revenge by denouncing him for desertion to the Austrian authorities, as the fool had written to her to explain what he had done with her money. As he is executed, she roams around Venice's calle calling out his name, presumably repenting for her actions.

The original novella which Visconti embellished upon, by Boito, is much more interesting. There is no Risorgimento cause, the countess is a thirty-nine year old Italian woman (old by 19th century standards) who falls in love with a young Austrian officer, who is very handsome but a coward, a man who lives off expedients. She gets him executed for desertion once she discovers his betrayal, but she does not roam around Venice calling out her dead lover's name. Instead, she returns home to her old, boring but very wealthy husband and resumes her life as a high-class society lady. She has exacted her revenge and in this case yes, it is a dish served cold, because the countess no longer feels love for the man, once he dares to insult her and mock her. She had kept his letter in which he foolishly described his bribe (with her husband's money) and  decided to teach him a lesson.

I don't know why Visconti felt the need to change the original novella and create a character almost reminiscent of Anna Karenina.

I think Boito did a much better job. His Countess speaks in the first person recounting her misadventure, many years later. Somehow, Boito's Countess is closer to me than Visconti's. I would not go as far as getting someone who betrayed me killed - I am no Lady Gucci - but the idea of cold revenge is most appealing. Getting someone killed is extreme and not advisable, for obvious reasons. The best course of action is to cut your losses and move on, karma does the job for you!