(When I began this series of posts written during the lockdown, I chose the title 'Life in the Time of Coronavirus'. But after a while I found the title unmanageable, so now I am simply numbering the posts and using the tag #At home with...)

I recently took part in the '10at10' series of interviews on Instagram Live by designer Ira Iceberg, with whom I worked in 2019  (you can watch the interview here. and also below).  I mention this because, in the course of the interview, Ira asked me about my strategies to survive the lockdown. This post complements the interview.

By now we have all developed our own ways to cope with the lockdown. What am I doing? Apart from going out food shopping, which still remains one of the dullest tasks ever, despite the opportunity to walk through my local park, I am sleeking (doing sleek technique) regularly, even more so now than I ever did, though I was always a dedicated sleeker even in pre-coronavirus times.
I also alternate between repurposing old clothes and experimenting with knitting and crochet and obsessively, I look after my plants, having discovered that my tiny balcony can be put to some good use, after years of utter neglect - it needed some good cleaning. So I bought a dwarf wisteria, which was delivered on Friday (a day of deliveries, I also got my Vaara dancewear but I will tell you about it in a different post) and am encouraging my jasmine to cling onto the railings of said balcony, where I have also tied some large umbrellas to protect my plants from the rain, following the advice found in this post). I am dreaming of the luxuriant growth of both climbers, as in the picture below;  the reality is infinitely more modest. 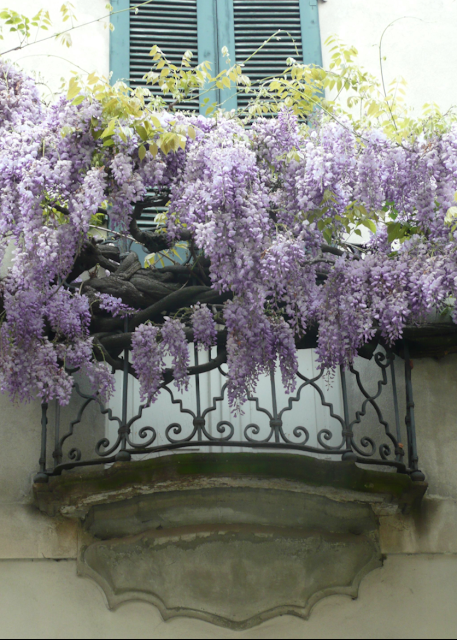 Wisteria on a balcony in Crema, Italy. Photo: Nicky Deo (via Pinterest)


Time drags during the lockdown and I have found some solace in reading. I occasionally scribble but no, the real pleasure is in reading or re-reading the classics.  Why the classics? Because, as Calvino said in his Why read the classics? they are "books, which the more we think we know them through hearsay, the more original, unexpected and innovative we find them when we actually read them".
Thus I  read the entire Clarissa, the history of a young lady by Samuel Richardson (see the previous post) and really enjoyed it; it was a fortnight very well-spent. Then I read an article about Salman Rushdie's rewriting of Don Quixote (the novella Quichotte, which I plan to acquire soon).  It sent me straight to LibriVox for an audiobook of Cervantes' classic. I am now listening to it and rediscovering its power and intensity.  It is the John Ormsby translation  - I also have the Penguin Classic edition translated by John Rutherford, which I am consulting when the  LibriVox reading gets tedious - I have commented on the uneven quality of volunteer readers in connection with the Clarissa audiobook.
A favourite of my mother's who used to quote extensively from it, in earlier attempts at reading it I never went past the windmill episode and skimmed through the two volumes, finding it too taxing to follow in its entirety. Don Quixote, published in 1605, is a complex book, whose translation has always been a vexed issue because Spanish has a natural grandiloquence that is most difficult to render in other languages without sounding exceedingly pompous and affected. I will not elaborate on this; there are many learned papers one can read about translating El Quixote, as Cervantes' masterpiece is affectionately known by Spanish speaking people - and, incidentally, Cervantes too raises the issue of translation in volume one, when Don Quixote's books are being burnt by the hidalgo's well-meaning friends.
There are also a few movies around attempting to render the book cinematographically, the latest is the one by Terry Gilliam (2019), who took a good twenty years to make it (you can also watch the documentary he made in 2002 Lost in La Mancha, when it became clear that making the movie was going to be quite an undertaking, due to lack of funding.)


I was curious to know about novels inspired by Don Quixote. The list is long as Cervantes has been admired by many writers. Madame Bovary by Flaubert is but a female Don Quixote, evident in her quest for romantic love - Flaubert regarded Don Quixote as one of the most important works that helped him to develop as a writer.
But there is also The female Quixote by Charlotte Lennox, published in 1752 and appreciated by the literary establishment of the time, especially Samuel Johnson, and which was subsequently used by Jane Austen as an inspiration for her Northanger Abbey - in all this one can see how writers are constantly in dialogue with one another, across time and space. It also makes one aware that,  to be a good writer,  one really needs to read widely.
So thanks to LibriVox, I am also listening to The female Don Quixote, alternating between the original and Lennox.
I recently told a friend  (in an email) that I plan to emerge from the lockdown as a very well-read person, with a better knowledge of world literature and of the classics. I can't keep on checking the news and feel sorry for not being able to do this or that, I need to focus on something positive.
I have always enjoyed reading, but now, I have taken to it with a vengeance.
Will I be a better person for it? Possibly not. One thing is certain, however: I am definitely not getting bored. And this is more than enough to justify the effort.