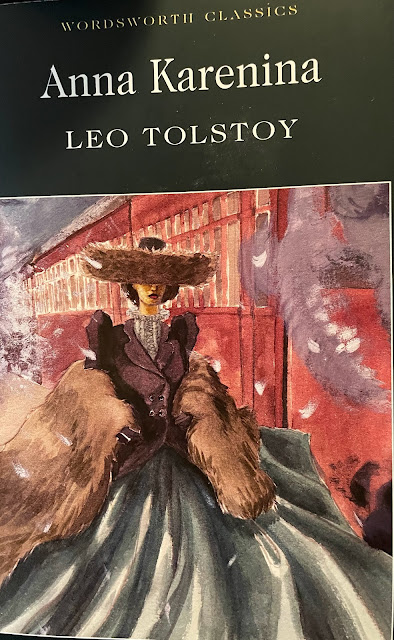 I am writing this on 15th February, though I started the post last night, the 14th.  The Anna I am in love with is Anna Karenina, the wonderful novel by Lev Tolstoy.  It is fitting to write about Anna Karenina on Valentine's Day, when we are meant to celebrate love, because love is a central theme of the book. Anna's love for Vronsky is  not quite  of the romantic kind; it is  a love that is a curse and renders us powerless and deeply unhappy, a love that is akin to damnation. It is a dark kind of love. It is contrasted by the 'family' love of Levin and Kitty and Levin's desire to come to terms with the meaning of life.

I have several translations of Anna Karenina,  I am not able to read it in the original Russian. I have the Maude, which is laborious, the Garnett which sounds very much like Constance Garnett and not so much like Tolstoy; even without knowing Russian you can tell, Garnett's translations of Dostoevsky and Chekhov sound quite similar to her translations of Tolstoy.  And then I have the  Bartlett, which is the very best of them all, and which at the moment I cannot find among my books, though I definitely own a copy. I will end up buying a new one, as I often do when I cannot find a book in my home library, that's why I have duplicates...

But let's not get involved in a discussion of which translation is better,  it is all rather relative. My first encounter with Anna Karenina was in its Italian translation by Ginzburg, if I am not mistaken. I read it while lying in bed unable to move following a fall that nearly, but not quite, broke my back. I was 17 and in a hospital, all I could do was read books.

I was captivated by Anna and her passion and identified with her. I fell in love with Vronsky and longed to meet a man like him, to experience the passion Anna felt . How I disliked her stuffy husband Karenin, so self-righteous.  Anna's suicide seemed the right way to end her predicament -  I wept as I read about her final moments. But as a teenager, I was unable to appreciate fully the beauty and depth of Tolstoy's novel, the lyricism of his descriptions of nature, thus I skipped chapters. I did however read, avidly, the chapter in which Vronsky races and breaks the horse's back and then kills the beautiful animal, as it is customary to do with badly wounded horses. There was a resonance. I too was wounded and in pain.

I read again Anna Karenina in my late twenties, this time in English and I think it was the Maude translation. I was travelling in India at the time; on long train journeys, Anna Karenina kept me company. I realised that the Maude translation was clumsy but the novel remained outstanding. This time I fell in love with Levin, also a passionate man, with a deeply philosophical bent.

Fast forward a few years. My son was studying Russian for his A levels and I borrowed his copy of Anna Karenina, I think it was the Peaver-Volokhonsky translation.  This time I paid greater attention to the secondary characters and really loved the episode of Varenka and Sergey Ivanovitch Kozhnishev and the marriage proposal that never materialised because he is unable to express his feelings, filtered by his intellect: "But instead of those words, some utterly unexpected reflection that occurred to him made him ask: "What is the difference between the 'birch ' mushroom and the 'white ' mushroom'? Varenka's lips quivered with emotion as she answered: "in the top part there is scarcely any difference, it's in the stalk" And as soon as these words were uttered both he and she felt that it was over, that what would have been said would not be said"  (Garnett translation).

During the first lockdown in 2020 I started watching film renditions of Anna Karenina and really enjoyed its modern-day adaptation The Beautiful Lie (2015) set in Australia, with Anna and Karenin (now called Xander), both tennis stars, and Vronsky, here called Skeet, a musician. You'd think that Anna is too 19th century to be convincingly contemporary, but no, it works. In the Australian series her affair with Skeet ends up in the tabloids and the reaction to it is similar to that of 19th century Russian high society, to which Tolstoy's Anna belonged. She continues to be tragically relevant.

My favourite moment in the book is the stream-of-consciousness monologue by Anna on that fateful afternoon when she throws herself under the train. The train is an important motif in the novel, as we see it at the beginning, when Anna and Vronsky witness the tragic suicide of a stranger at Moscow station.

We are used to stream-of-consciousness, it is a very modern literary device. Tolstoy had recourse to it before it was even known as stream-of-consciousness and it was entirely novel in his days. Novelty aside, it is so wonderful to get into Anna's head, the thoughts that cross her mind without any particular order, as they rise and fall.  And then her final moments:

"The candle, by the light of which she had been reading that book filled with anxieties, deceptions, grief, and evil, flared up with a brighter light, lit up for her all that had before been dark, cracked, began to flicker, and went out forever" (Maude translation)

Reading Anna Karenina has always been for me better than any anti-depressant. That's why I could totally relate to Maura Kelly's piece "What Anna Karenina taught me about living with depression". As she says, "though Anna’s tunnel vision killed her, it helped me stand back from my own narrow view for a more expansive look at my life".  I could not agree more.