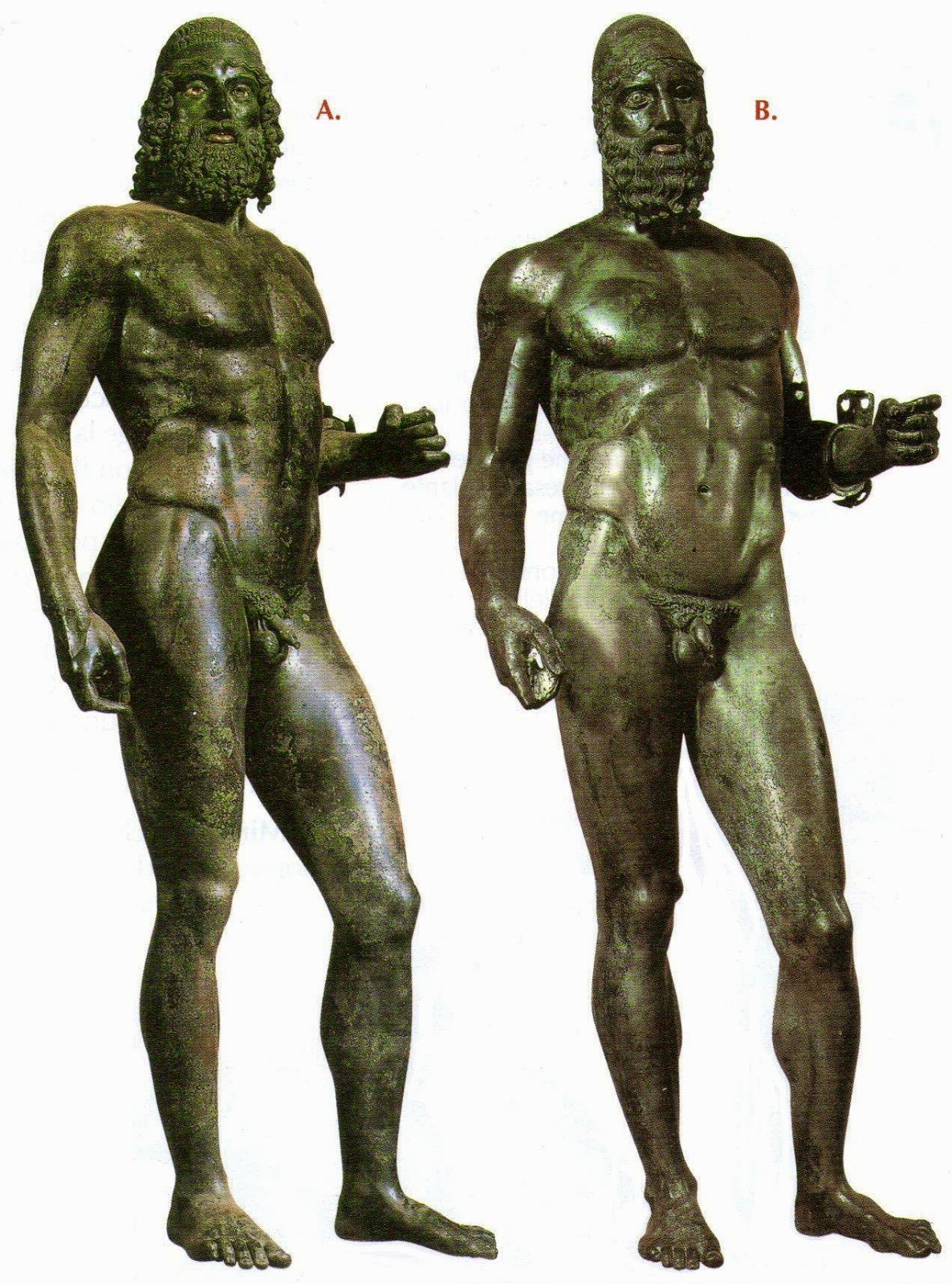 
Back in 1972, when I was barely a teenager, two bronze sculptures of male warriors dating back to the 5th century BC were accidentally discovered by a snorkeler at Riace, a coastal village not far from Reggio Calabria - I am from the south of Italy, this is my home ground. The bronzes, known as A and B,  were hailed as masterpieces of classical Greek art and underwent a decade of restoration and cleaning up. In 1981 they were exhibited in Florence and visitors (me included) swooned at their sight, admiring their beauty. For beautiful they are indeed: about  2 metres tall, the statues depict handsome, athletic men, totally naked, with nothing left to the imagination, standing in contrapposto poses, their musculature delineated in the minutest detail yet retaining a quality of softness, their proportions absolutely perfect. They have never been identified, we don't know which mythological hero they depict. I have often wondered whether they would be supermodels today, if they could magically come to life - those beards they wear and their ringlets are so fashionable too!

I am thinking of the Riace men - I do perceive them as human, though I know they were representations of either gods or heroes - because of a major exhibition  at the British Museum which is about the body in ancient Greek art - Defining Beauty. And though the exhibition is about both male and female body, there is no question that the naked male body remains a privileged subject, because this is what classical Greece celebrated. The handsome young naked athletes of Athens were sung in poetry and depicted in art and set a standard of male beauty, art made for men by men, with a strong homoerotic quality. The male body was idealised, it was beautiful and heroic, it was kalos k'agathos. As American classicist Glenn Most says:

"this idealizing view persisted for many centuries. When it did decline, it was because of the decline of Greek culture itself...Yet this ideal was only submerged and not entirely effaced, and it went on to be rediscovered during the course of the 19th century and to provide both an important stimulus to the development of modern amateur athletics and a criterion of imagined perfection by which these could be measured and, of course, found wanting".

The Riace bronzes are also on my mind  not only because of my disappointment at discovering  they are not part of this major, enthralling exhibition -  even though they are included in the catalogue -, but also because I recently saw a video about men's standard of beauty around the world, and the fact that male body image is now also becoming a source of anxiety, as much as female body image. 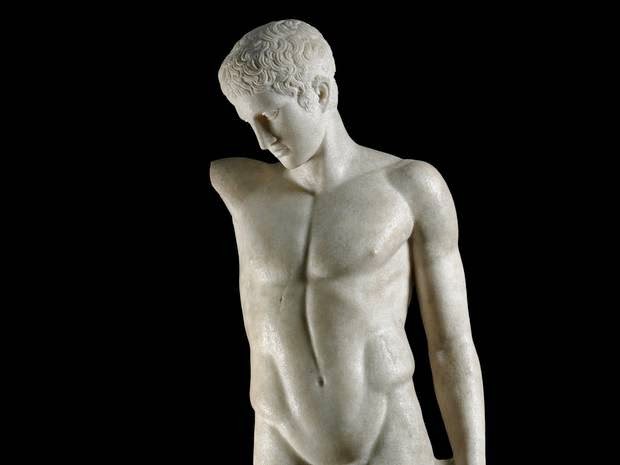 Somehow this exhibition and the bronzes have found a way to remind me that 'myth' has shifted its meaning.  Not every male in ancient Greece looked like the Riace warriors, who were mythological figures, whose heroic beauty was to be imitated, something that could be aspired to, yet very distinct from real life and perceived as such. This is no longer the case in our contemporary society where, as Sophie Woodward elaborates in her essay The myth of street style, "the distance that exists between the hero and the icon and the ordinary person is erased ... it is the ordinary person that is the mythologized figure."

This is the main difference between then and now, between the classical myth  and the mythologising  of today, a question that Roland Barthes has also addressed. It may well have contributed to the rise of body image anxiety, as a consequence of the erasure of the distance between mythological iconicity and ordinariness of life.

It's a thought worth considering.

See below how Napoleon Bonaparte was mythologised by Antonio Canova  - and Bonaparte was apparently acutely embarrassed by this portrayal, which he regarded as "too athletic". However, Canova turned him into a Greek hero, with the classical symbolic physicality of a Greek hero, as a 19th century homage to the ideal of the classical. The statue is known as Napoleon as Mars the Peacemaker  and is now in London. 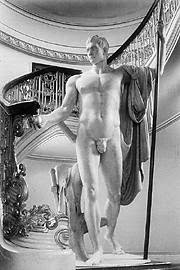 As to the exhibition, there is a lot more that could be said about it. Its timing is uncanny and its political nuances, at a time when Greece and the EU are not exactly on the best of terms, can hardly be missed. But this is a topic for another post. For one thing the exhibition has not opened yet, only the catalogue is available, so before commenting I would like to go and see it for myself.  It promises to be a very interesting exhibition indeed.