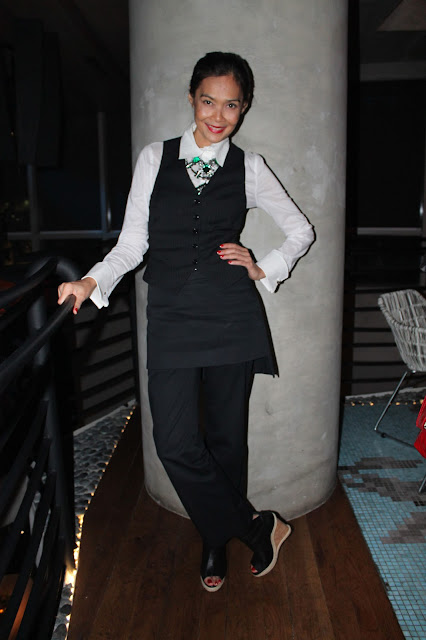 Nearly a month here and things are slowly beginning to fall into place.  I have even done a little modelling:  though my look is not right for Indonesia  - that grey hair (sigh!) -  some young photographers I have met are interested in photographing me and some upcoming young designers are happy for me to wear their clothes for these shoots. So I have done a shoot with Irene Barlian, wearing Maria Ruth Fernanda's designs - she will be having a show at JFW - and have another shoot  planned with another photographer, also wearing an upcoming designer's creations. This is good for my portfolio, it makes me feel I am not cutting off ties with modelling and gives me a further insight into the world of fashion in this part of the world.
I have been active meeting designers and various creatives, including models. I am ever so lucky that my flatmate is into advertising - this morning a commercial was being shot at my place, it was very interesting indeed and truly weird to get downstairs carrying my laundry and finding a whole crew in the living room and kitchen. It was one of those moments!
But let's talk about models. I met Ria Juwita, a well known model who walked for Chanel and various other fashion houses when she lived in Paris, a couple of decades ago. Now she is head of the marketing division at Plaza Indonesia, one of the premier malls in Jakarta, where many well known European and American designers have a presence. The designers themselves do visit from time to time - Ria told me that even Victoria Beckham, designer, model and UN ambassador, has been to Plaza Indonesia and her clothes can be bought there. Ria is truly admirable: beautiful, very competent and able to speak several languages.
The silver hair look does not exist here, Indonesian glamorous women would not be seen dead sporting grey hair, it really spells decrepitude to them, so my look is definitely weird (or very caucasian perhaps? I have noticed that even men dye their hair over here). However, the good news is that senior models are very active here and they can be seen in roles that are normally taken by much younger models in Europe and America. Somehow this resonates with what Grey Models is attempting to do. 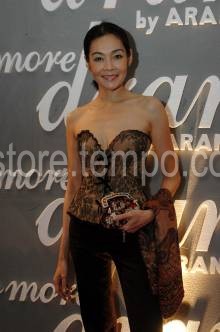 Ria Juwita
Take Ria for example. She has a most demanding job at Plaza Indonesia yet she continues to model . In her modelling work she is not stereotyped as a granny or an older model, she is just a model and can be seen in shoots portraying an elegant and glamorous woman, as she indeed is.
To me this is a novelty, I am so used to the typecasting that occurs in the UK and the rest of Europe/America.
I have a few exciting meetings planned, including an interview with Sarita Thaib. I can't wait.
Meanwhile I am exploring this city and learning to appreciate its hidden treasures. If only it were a little less chaotic, traffic wise, I could really enjoy being here!
Posted by Alex B. at 15:37:00