When 'polemical' becomes synonymous with 'tendentious and somewhat shoddy' 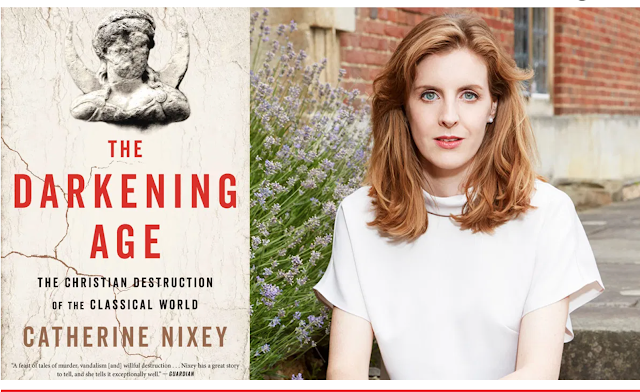 I am a bit late in joining the discussion, but having finally read Catherine Nixey's The Darkening Age. The Christian Destruction of the Classical World (2017) and a significant number of its reviews,  I feel compelled to add my comments. Nixey's book is definitely engaging though a tad controversial.  It continues to sell steadily, having now been translated into five languages - you'd hardly believe its subject matter would be so popular, but there you are!

I got hold of the book after a good friend of mine,  greatly interested in this historical period,  having read it in its Italian translation, mentioned it in conversation. I am not a historian by training - I am an art historian - nor do I have in-depth knowledge of this period of history but if you mention to me an interesting book, I am game, I will read it. Moreover, Nixey discusses,  among others,  Hypatia of Alexandria, the famous philosopher and mathematician of antiquity whose fictionalised story found its way into a movie, Agora (2009),with the wonderful Rachel Weisz in the title role. As an aside, I will add that about four years ago I modelled for a painting of Hypatia. It was the artist who gave me the DVD of the movie, so that I could devise some appropriate poses for the portrait. Unfortunately, that painting was never completed, so I missed my chance of being immortalised as Hypatia.

Catherine Nixey is a journalist, not an academic, though she read classics at Cambridge University and taught in schools for a while. Her book, her first, is a polemic essay, a point that must be borne in mind when reading it and when wading through its many reviews. Nixey argues that Christianity is largely responsible for  the crumbling of the classical world and its culture.  Early Christians showed a high degree of stubborn stupidity and total inability to appreciate philosophical arguments; they destroyed and destroyed. The parallels with Islamic fundamentalists of ISIS, responsible for the destruction of Palmyra, in Syria,  are obvious. The book actually begins with a very evocative description of Palmyra being torn down by fanatic Christians, just like it was in 2015 by fanatic IS militants.

The style of narration is idiosyncratic. Nixey is relentless in her condemnation, she hammers her point home with constant repetition and after a while, it gets rather tedious. You begin to wonder why the argument has not been nuanced, why it has to be drilled into the reader that Christianity was highly pernicious and that the tales of Christian martyrdom were largely fabricated by overzealous bishops.

Then as Choam Goldberg notes in his Italian blog, one spots a couple of factual errors, particularly with regard to the library of Alexandria and you, the reader, begin to wonder whether there is further flippancy in Nixey's treatment of historical data. In other words, you begin to doubt. And when the death of Hypatia is described, in a rather cinematic way, you get the sense of a non-fiction work that is actually a fictionalised account, a written equivalent, but way less sensitive, of Agora. 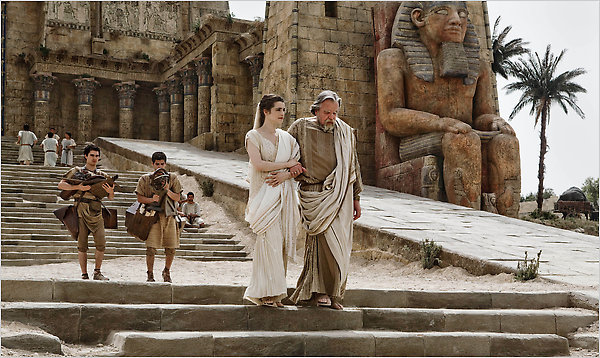 There is a dearth of good popular books on history and yet there is, on the part of readers,  a desire to engage with the historical past, so books such as The Darkening Age easily fill a gap. But even though such books are not meant as academic studies, the responsibility of being thorough and unbiased in the way historical data is researched and treated weighs heavily on the writer's shoulders.

I felt somewhat dissatisfied when I reached the end of the book and I began my own research. I found reviews written by several scholars and one in particular by Dame Avril Cameron, Professor Emeritus of Late Antiquity and Byzantine History at the University of Oxford, who points out that Nixey is rehashing the views of  18th century English historian Edward Gibbon. Gibbon's historical interpretation of the 'fall' of the classical world gave rise to the very objectionable notion of 'Dark Ages'  a period, says Dame Avril,  "when the glories of classical civilisation were supposedly obliterated for centuries until the Renaissance and the Enlightenment made possible the triumph of Western European liberalism and secularism". Dame Avril had hoped this notion of dark ages had finally been rejected, thanks to the work of dedicated scholars. But no, the idea is back with a vengeance, apparently, wholly embraced by the likes of Nixey.

Katherine Kelaidis, a resident scholar at the National Hellenic Museum in Chicago, and a historian, provides an insightful corrective: " while Nixey is quick to cite the anti-classical sentiment of early Latin fathers, particularly Saint Augustine (who famously never mastered Greek) and Saint Jerome, she is strangely silent on the great Eastern patristic writing on the the subject of pagan education... It is a telling omission and speaks to a wider shortcoming of The Darkening Age. In a completely worthwhile attempt to expand the conversation and correct the record surrounding early Christian engagements with pagan learning and culture, Nixey falls into the same reductive trap that has shaped Christian understandings of the period."

My sentiments exactly. I applaud Nixey's attempt to throw light on a period of history that is not often discussed and which remains shrouded in mystery in the popular imagination but I cannot help reiterating that one has to take care in verifying the information gathered, undertake multiple cross-checks and make sure the sources used are credible and reliable.  Also, a less pugnacious approach would help to make the book more pleasant to read. As it is, it sounds so much like an invective against people and events that are long, long gone. Historical writing and historical research cannot be conveyed in a tone of recrimination, it defeats its purpose.

(Should you wish to read  reviews of this book I would suggest you look up the following:

The Guardian  (a quick roundup)

Γεγραμμένα (in English, despite the title)