The apocalypse of Salento

Xylella fastidiosa. The Apocalypse of Slento

I am pretty sure not so many people have been aware of the devastation caused by  xylella fastidiosa, a
bacterium from Latin America, transmitted through insects, that has been destroying the olive trees of Apulia since 2013, with irreversible  damage to the ecosystem of the region and to its economy.

I came to know about it when I went to the Salento on holiday last summer. An acquaintance who owns some farmland in the region told me of it, sounding pretty glum, but I really did not grasp the gravity of the situation until I saw with my own eyes the decimated olive trees on my way from the airport in Brindisi to the city of Lecce.

I must confess that even then I did not realise the extreme consequences of the onslaught, not until I started doing some reading. I came across the brilliant documentary film by Paola Ghisleri, a filmmaker trained in the UK who currently lives in Geneva. Her father owns a farm in the Salento region and was desperate about the xylella hitting his olive trees.   Paola decided to make a film documenting the impact of this bacterium and the significance of the death of the olive trees in a region that has been defined by their presence.

Olive trees are very important in the landscape of southern Italy. They go back millennia. As Autorino writes:

" traditionally the olive tree has been deemed as the pillar of the Salentinian agrarian culture and landscape; thus upheld with pride by many. Olive groves are often inhabited and retained like actual eco-museums; photos of the most twisted and embroidered exemplars are exposed in people's shops and private homes; whilst tours and walks are often organised for tourists around the oldest exemplars. The passion for this plant is most commonly exemplified in the celebration of its aesthetics and forms".

At the moment two practices are followed in an attempt to eradicate xylella. They are 1) eradication of the olive trees and 2) the abundant use of pesticides. But these are not regarded, locally, as viable solutions.

According to Comitato SOS – Salviamo Ora il Salento (Save Salento Now Committee), the best course of action is to implement ecological resilience, understood as 'the ability of an element to self-repair after damage and to return to the initial state after being subjected to a disturbance that has removed it from that state' by adopting less exploitative agricultural practices.

In his photoblog that documents the impact of xylella, János Chialá, wrote in 2019 of the horror felt by the local people at the idea of eradicating ancient olive trees and the number of conspiracy theories that have begun to circulate, fuelled by social media, which seem to deny the existence of the bacterium  -one can see here a parallel with Covid-19, which is decimating human beings and which a number of people deny the existence of, only today I met someone that vowed there was no Covid 19 and vaccine is intended for genetic control. 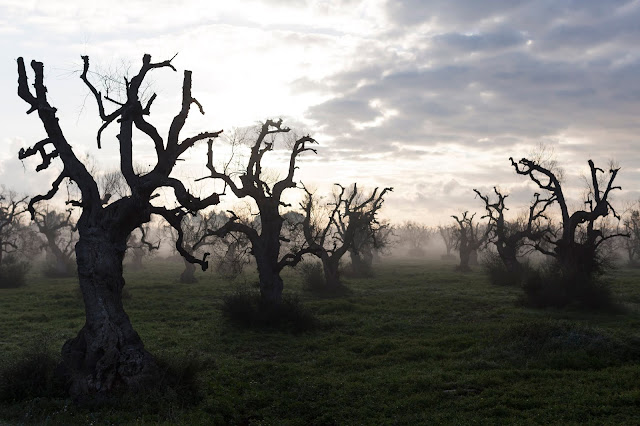 Yet xylella fastidiosa is a real threat and it is likely to spread to other countries, such as Spain and Greece, where too olive groves are found in significant numbers. But the xylella problem is compounded by other issues relating to our current intensive agriculture practices and our overall relationship with the eco-system.

"We do not know whether the scientists will ever find a cure to xylella fastidiosa" reports Chialá "what we do know is that we will continue to eat a lot of olive oil, and that our relationship to olive trees will continue, as it has done for thousands of years. What form it will take in the future is up to us to decide, and in doing so we should not repeat the mistakes of the past, ignoring the social and environmental aspects of the relationship between people and olive trees"