Walt Whitman posing with a butterfly 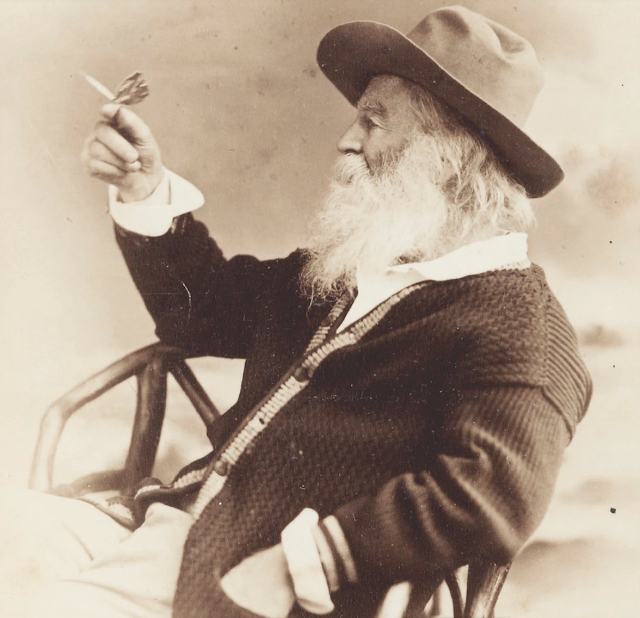 Walt Whitman, posing with a butterfly in 1883. Image via The Grolier Club
I first came across Walt Whitman through Cesare Pavese, the great 20th century Italian writer, plagued throughout his life by suicidal urges, who,  at the age of 21, introduced Italians to American literature, during the fascist era. He wrote his thesis on Walt Whitman, later published as a book about the American poet, and embarked on translating many great American writers, including Hermann Melville. In some of his work as a poet in his own right, Pavese referenced Whitman.

(NB. Pavese though he accomplished much, did not fully understand the nuances of Melville's thunderous and majestic prose and was not able to convey in Italian the language shifts of Captain Ahab. I realised this when I read Moby Dick in English and was overawed by Melville's prose, akin to poetry. Moby Dick remains one of my favourite books to date. See my post on Moby Dick here ).

It was only after coming across the poignant article written in 2011 by Michael Bourne on how Walt Whitman saved his life that I felt compelled to pick up Leaves of Grass (1855) and realised what I had been missing.  That extraordinary Song of Myself, with its opening - "I celebrate myself and sing myself/And what I assume / For every atom belonging to me as good belongs to you",  or  I sing the body electric, which was also, I realise, the title of an album by Weather Report  which I loved in my younger years but never knew had a link with Whitman - "I sing the body electric/ The army of those I love engirth me and I engirth them/ They will not let me off till I go with them, respond to them, / And discorrupt them, and charge them full with the charge/of the soul" are now forever etched in my memory.

Nothing prepared me for the sheer beauty of Whitman's free verse. He is the epic poet of America. He "made poetry out of making poetry", as Pavese said.

Whitman's verses convey passion, euphoria and joy,  speak of love, sexuality, nature and are full of zest and respect for life. He was a humanist, who believed in freedom and who, with his poetic legacy,  inspired many generations to follow - the Beat generation poets, Allen Ginsberg and the recently departed Lawrence Ferlinghetti in particular.  Whitman spoke openly about sex, extolling the beauty of loving both men and women. The world in the 19th century was not yet ready for someone like him, with his ability to tune into his own humanity and proposing such an intense, free, joyful and energetic celebration of life.

Leaves of Grass will be my companion for a long time to come.

The first I graft and increase upon myself, the latter I