Christian Dior, the great French couturier, was immensely superstitious and consulted fortune-tellers all the time. He loved the Tarot and was totally mesmerised by it. Me too, I am a 'devotee' of the Tarot, I have two packs, two versions of Rider Waite and love the Marseille Tarot, in its bareness and simplicity. 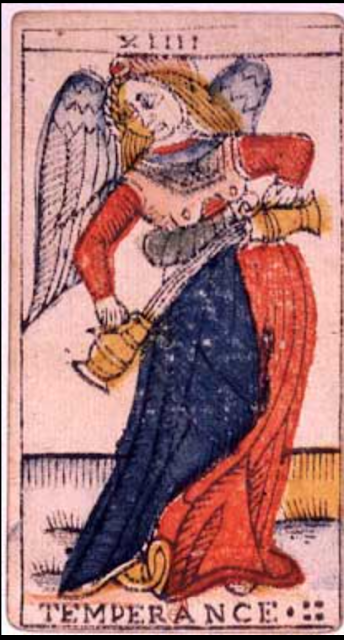 A few years after Maria Grazia Chiuri became creative director of Maison Dior, she thought it appropriate to design a Tarot inspired collection, which she unveiled in January 2021, though nods to the Tarot were present in her work of 2017 and 2018.  Does she believe  the Tarot predicts the future? That  is not the right question , she says, because the Tarot is  not about fortune telling, but about exploring archetypes and the hidden dynamics of a given situation.

Chiuri immersed herself in Renaissance culture and was inspired, when designing her new collection,  by the Visconti-Sforza deck, created by Bonifacio Bembo.

“Tarot cards are among the keys to accessing the magical realm, to explore the unknown while fearlessly looking deep inside oneself,” explained Maison Dior in the press release. “Maria Grazia Chiuri immediately felt a connection with these imaginary worlds and this visual language whose symbolic lexicon is rich in complex and fascinating characters.”

In her designs  Chiuri privileges the artisanal component. It is part of her concept of couture, which embraces the craftmanship of for example, Salentine embroidery,  as it did in the cruise collection of July 2020, presented in Lecce,  Apulia. On that occasion she had  Piazza Duomo adorned with luminaria, a homage to the Salentine culture of the 'festa patronale' in honour of patron Saints.  The messages of the luminaria were feminist and empowering. Chiuri has Salentine ancestry and she often tries to reference it.

The people of Lecce watched in bewilderment, not quite sure of what they should be making of all this. A designer friend, originally from Lecce, said that Chiuri's gift to the city was invaluable, it was just unfortunate that so many, locally, were not able to grasp its significance. But that's another story, to be explored in a different post, underpinned by the tension between the global and the local.

The Tarot inspired collection presented by Dior was exquisite. Because of Covid19 restrictions, it was not a  live  runway show, it was a  film, directed by Matteo Garrone. The camera follows a young woman who is having a Tarot reading, as she moves  through a castle filled with the major Arcana, such as Temperance, High Priestess, Justice and the Fool.

Violetta Lazé has given a full write up on the meaning of the Arcana in Harper's Bazaar, thus I will not attempt to duplicate her interpretation.

I am intrigued  by the way Chiuri has translated the card's meanings into the medium of clothes. It required imagination and a deep understanding of the essence of the Tarot.

As for the latter, like I said, I am quite obsessed with it. I consult it almost daily and I like drawing just an Arcana card and reflect  on its meaning. Sometimes the Tarot speaks clearly to me, sometimes it withholds its message. I can only return to it after things have occurred and always find that the Tarot was speaking to me about the heart of the matter  all along, only I was not able to understand.

My card today was The World. which indicates completion, integration, accomplishment and travel. 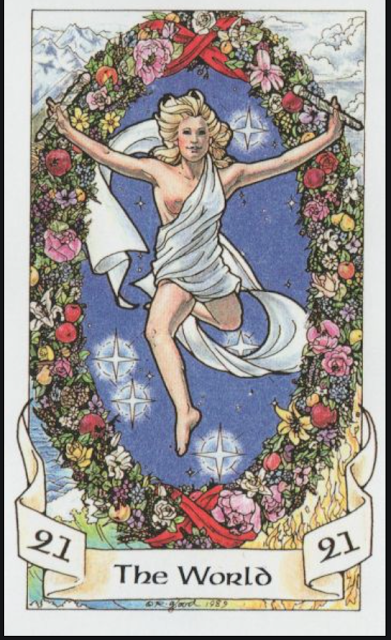 I look forward to seeing how it unfolds...