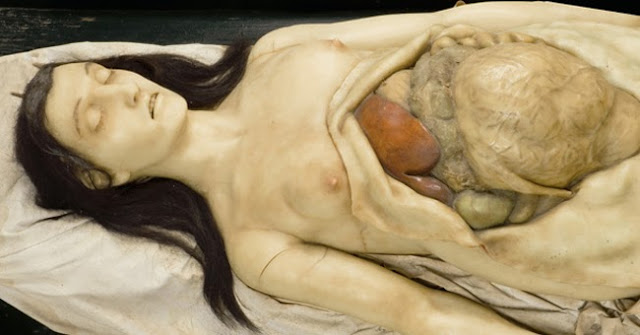 
Anatomical Venuses were very popular in the 19th century. They were realistic wax models of idealised women with detachable parts which showed their internal organs in great detail.
Today I turned myself into an anatomical Venus at St Bartholomew's Hospital Museum of Pathology, known as Barts Pathology Museum, for a life drawing workshop arranged by Art Macabre.
My internal organs were painted on me and I posed in the main gallery, surrounded by skeletons and pathological pots. Barts hosts the skull of John Bellingham, who assassinated Prime Minister Spencer Percival in 1812. Barts is also the place where famously Sherlock Holmes and Dr Watson met, in Conan Doyle's novel A Study in Scarlet. 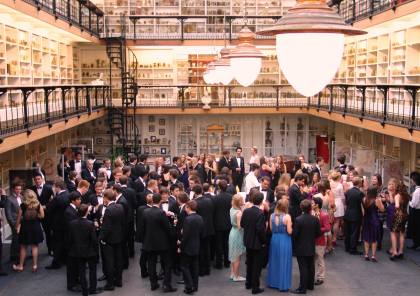 Barts Museum. Photo: Barts
This was my first assignment with Art Macabre, an untutored life drawing workshop for people of all abilities, in the museum surroundings. I posed together with life model Steve Ritter.
Barts is a very peculiar museum, inside a hospital right in the City of London, in a gorgeous Grade II listed building.
I arrived early and was greeted by loud music in an empty gallery.  I recognised the music as being of one of my favourite bands, Smashing Pumpkins. Imagine that, grunge at Barts!
Later I met Carla Valentine, assistant curator, who said she often listened to music when no one was in the building. I  told her I liked her choice of music, so we agreed on a playlist that featured Smashing Pumpkins while I posed.
Meanwhile Nikkie, from Art Macabre, came with lots of stuff, began to set up and Bloody Marys were offered to the guests. I did not realise how strong they were! I felt quite dizzy after a couple, I don't know how I managed to keep still - never drink while life modelling, that's all I have to say. Afterwards yes, but never before or while still doing it. 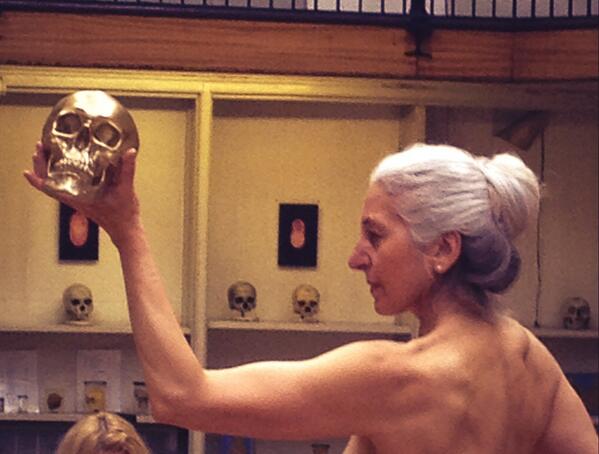 Me posing at Barts

Altogether it was a delightful experience, Barts is an amazing place, really worth a visit.

... is most disappointing. M&S have put together a bunch of highly accomplished women on top of their profession, dressed them in their new collection, got Annie Leibowitz to photograph them and now they hope to win customers. The idea behind this very expensive stunt is to identify British women who can be aspirational and who can inspire people to flock to M&S stores and buy the clothes. I love and respect all of the women, I really do, but

1. I am so very tired of seeing Helen Mirren as representative of older women. Surely, there must be other older British women who can fit the bill?
2. The thought of Tracey Emin wearing M&S is hilarious. Excuse me, Tracey...Emin...in... M&S?
3. The same can be said about the ethereal Darcey Bussels who always appears elegantly dressed by various top designers - Darcey is not your average M&S customer.
4. As Cambridge don and TV celebrity Mary Beard tweeted, not a sign of grey hair. Helen Mirren's hair is hardly ever grey, always mixed with blonde shades and this time it is carefully hidden under a hat.
5. What's wrong with hiring professional models to wear the clothes? I thought this was what fashion models did as a job.
What a U turn from last year, when M&S ditched celebrities and had models, including Yasmina Rossi, with her gorgeous silver hair. 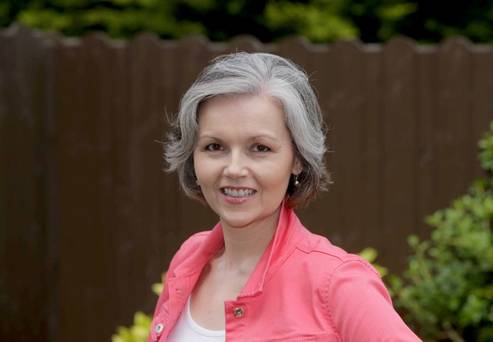 Denise O'Neill in The Belfast Telegraph

Denise O'Neill, recently featured in The Belfast Telegraph as a spokeswoman for grey hair, has commented as follows in a thread started by White Hot Hair founder Jayne Mayled:

"I think it does matter that there are no greys as it is not fully representative of women. I actually wrote to M&S 3 years ago on this very subject, ie suggesting that they use grey-haired women in the advertising. At that time I stated that they only use a single grey-haired (older) model for advertising their ‘Classic’ brand (which tends to be geared towards the older lady) and never in their more modern clothing brands. This is the very message that we are trying to change. We want to see chic and sassy beautiful grey-haired women in mainstream advertising of fashion, beauty etc – and breaking the stereotypical myth that grey = old. In last year’s M&S campaign, they used the beautiful grey-haired Yasmina Rossi and that was really groundbreaking.
I actually think that Boots, in their current ‘Real Women’ campaign for ‘No 7’ is a step ahead of the game. They featured all types of real women and included ‘Ali’ who is a beautiful grey-haired woman. So I say ‘Bravo Boots’ for showing a balance of real women - you are talking my language!
Why did M&S spend a fortune on this current campaign by using ‘celebrities’? They could have picked real women too, representing all types, styles and shapes. I wonder, do any of these ‘celebs’ really wear M&S clothing? One more point - I think it is vital that grey is showcased at its best, ie with the right haircut, make-up and colour and style of clothing. If it’s not, we are wasting our time – we will never ‘sell’ it and overturn the myth (a myth which has come about for this very reason)" 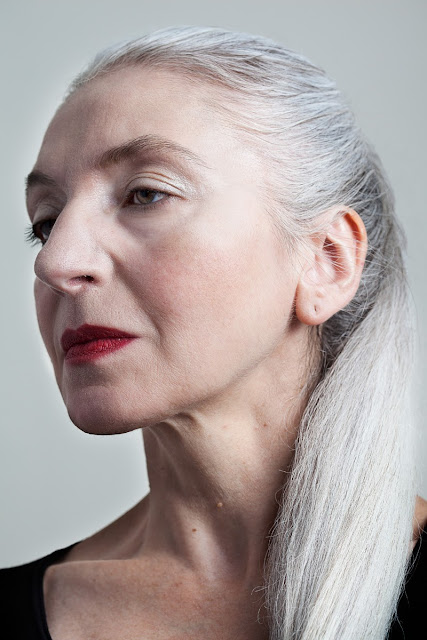 Well said Denise, I totally agree with you! Except perhaps on the point of real women. I would like to see models, rather than people who are hired through street casting. Models who are diverse, but nevertheless models. This is what Models of Diversity is trying to convey and I totally support their mission. 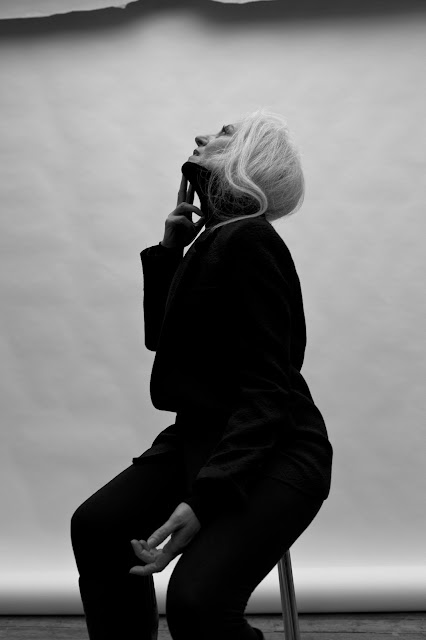 The yoga world has been hit by a series of scandals involving famous gurus, all alleged to have indulged in inappropriate sexual behaviour, of being abusive and even racist. The latest scandal involves Bikram Choudhury the founder of hot yoga. I used to be a regular and loved it, but then got tired of it and switched to another style, I have often done that throughout the years, I have done loads of yoga styles and come to the conclusion that there is only one yoga and the best is the one you practise on your own.
To be honest, I am not in the least surprised by these allegations of abuse. It is not the first time it has happened and probably it will not be the last. If it is not sex, it is money - both attributes of power. Ultimately, this is the main issue: power and its abuse.
I have practised yoga since my early twenties and am now well into my fifties. I mostly practise at home. I have done enough yoga to be able to teach a basic class, but have never felt any desire to do so. When I meet a yoga teacher I could not care less about her qualifications and training, I can see straightaway if she can teach or not from the moment she starts. I go to yoga class when I am too lazy to practise on my own - I loved going to Bikram yoga because of the novelty of the heat, but when the novelty faded I wondered why I was not being pushed further and found something else to do. Yoga is a solitary activity, a personal practice. As soon as you feel confident to do it on your own you'd better increase your practice and be less dependant on classes. Only you can be your own teacher, other people are instructors, some good, some bad. In other words, practising yoga should make you self reliant and be eager to explore on your own, because only you know your own body. Instruction helps but you should not become so dependent on a teacher. 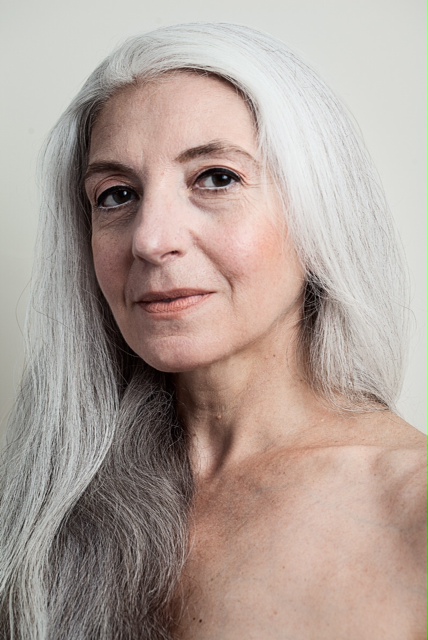 It is this dependency that leads to these situations in which trust is abused.
I personally regard yoga teachers the same way as personal trainers, professional instructors that can help you with specific problems. I treat them with the same respect and with the same distance.
There is a new movement called I am my own guru, which was started soon after the latest spate of scandals, to restore some confidence in yoga practitioners and in the yoga community.
I have always believed I was my own guru, so it is nice to see other practitioners waking up to what to me is the most fundamental yoga teaching.
Posted by Alex B. at 14:51:00 1 comment:

Silver: a state of mind, a statement of class

Recently I was directed to viewing a trailer on Vimeo of Vicki Topaz exhibition Silver: a state of mind.

In 2010 Topaz photographed a range of women, over fifty, a mix of models, actresses, professionals - there are quite a few academic women involved in the project.
The photographs are very beautiful, in black and white, very much in the style of traditional expressive portrait photography, wrinkles and imperfections are shown in all their glory and glorious they are. What is common to all these women is that they all have silver hair: long, short, curly, straight but all of different shades of grey.
It has taken a little while for Silver to tour but it is now doing it. It has also been written about in a number of international  magazines and newspapers. Who knows, we might see it in the UK soon enough, I certainly find it fascinating and would love to see the portraits for real rather than having to view them on a computer screen. 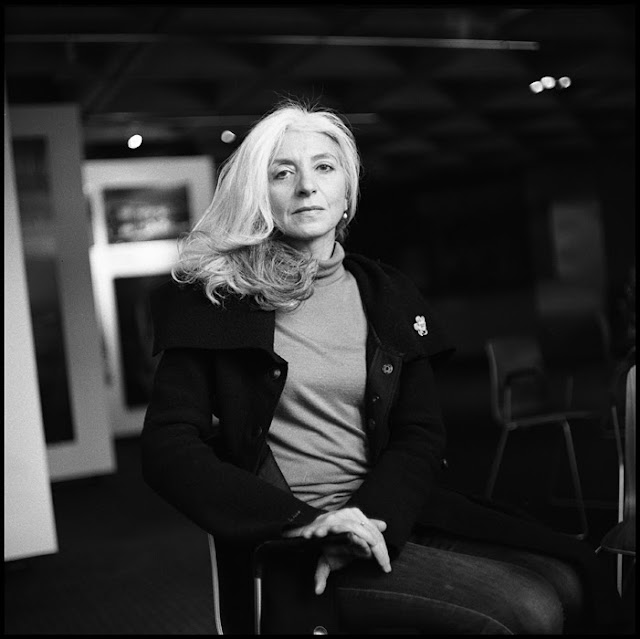 The concept of allowing women to talk about their grey hair is not entirely new. It has been used in advertising and occasionally in editorial spreads in which going grey is discussed. Women who embrace their silver with the idea of making a statement about their age and with the aim of encouraging a notion of beauty which is broad enough to accept signs of ageing are still few and far between. Vicki Topaz portraits are beautiful because the signs of age have not been airbrushed, that must have taken some courage on the part of the women who modelled for these images - we all feel a little vulnerable when our imperfections are shown.
I have also noticed that in the media it is mostly Caucasian women who are seen to embrace their silver, therefore these portraits are even more interesting because they do show a mix of ethnicities, with a few non-caucasian women being portrayed.
Going grey is not limited to Caucasian women. But I do worry that in celebrating the beauty of grey hair, women belonging to other ethnic groups are bypassed. It may well be that among non-Caucasian women the idea of colouring to disguise one's age is harder to be dislodged, but wait, no, I think this is not quite the reason, the real reason is to do with the usual ratio of Caucasian to non-Caucasian models
When I look at fashion images of Asian women, for example, even when portraying older women, I see them with black hair. The recent attempt by the Singapore based model agency Carrie Models, which launched a branch for 'mature models' - Carrie Elegance - with a much publicised TV competition to find suitable candidates does not show a single grey haired woman among their  models aged 35+. 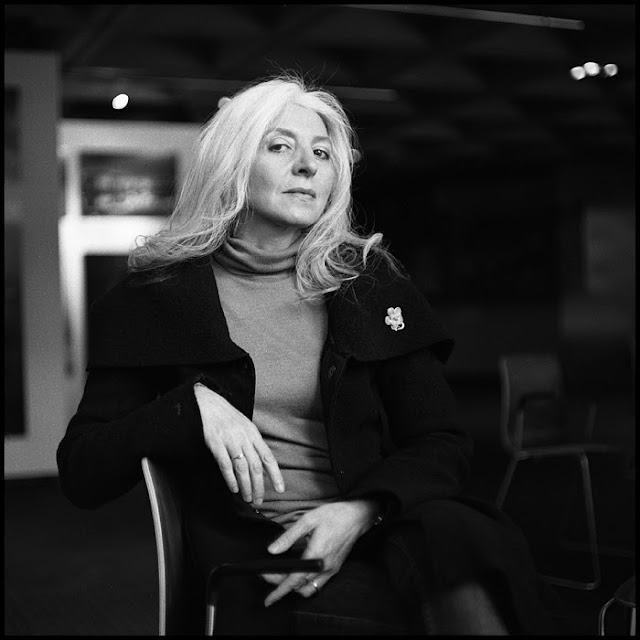 It also seems, as a phenomenon, largely confined to the middle classes. What I mean is not of course that only middle class women go grey, but that it is mostly middle class, professional women who are likely to embrace silver with the aim to project themselves as still beautiful, claiming visibility.
These are thoughts that I cannot help having when I step back and look at this 'embracing your grey' phenomenon, of which I am also part. By voicing such concerns I am not in any way expressing any condemnation, on the contrary. I simply wonder on the demographics of the phenomenon and why it should be confined only to a specific, ultimately rather privileged, group. 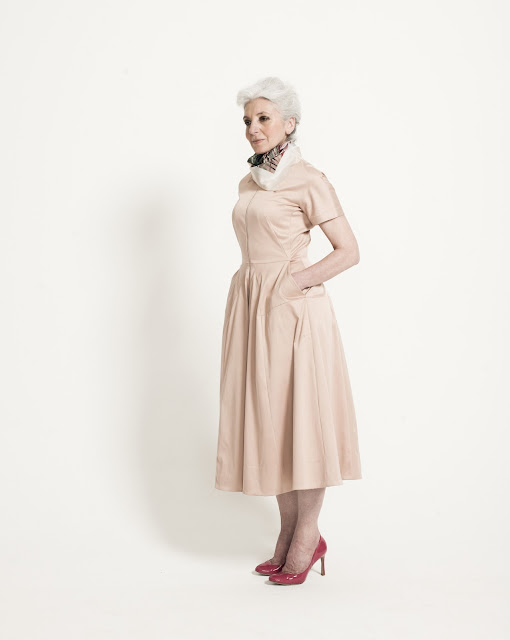