I got it into my head to do  El Camino, the Walk, the famous pilgrimage to Santiago de Compostela in Galicia, Spain, the supposed burial place of the apostle St James. A friend of mine from the US  has done it twice already, and when I met him last October, he enthused over it.  He is not particularly religious but the Walk, he says, is a fantastic experience. There is also a 2010 film about it, entitled The Way, which gives a pretty good idea of what it entails, in a fictionalised account of course. Worth watching.  And there is a host of documentary films about it.


My 'little' sister is also very keen on doing it. Unlike me, she a rather devout Catholic so the pilgrimage would be a true one for her. Anyway, we have decided to go together, it's nice to do it with someone else, and despite all our considerable differences, my sister and I manage to get on.
The first hurdle is training, you can't just get up and go, you need to get used to walking several miles a day. I am not much of a walker but I love doing dance and sleek classes, whereas my sister hates exercising at home or at the gym, but boy, does she walk!  Living in a lovely area of Italy also helps, she walks around the villages near her home. When she recently came to London to visit she would think of nothing but get out and walk, whereas I would always be asking to get a bus or jump on the tube.
But I want to do the Walk and will train for it. Fortunately, the weather is getting better, and London offers excellent walking opportunities, and special routes are available.  One can do the Capital Ring Walk, for example, which is divided into 12 segments. It seems one can go from Finsbury Park to Richmond Park on foot, it is a mere 25 miles.
Full of enthusiasm, I resolved, yesterday, to get started. Of course, I did it all wrong. First, there was the matter of the footwear - I wore town shoes, sufficiently flat but not entirely made for walking. It was not raining, so I did not ruin them, but my feet were not happy. Then I went in the early afternoon. Big mistake. Everyone was out jogging or taking their kids out on a stroller. Pathways were crowded. 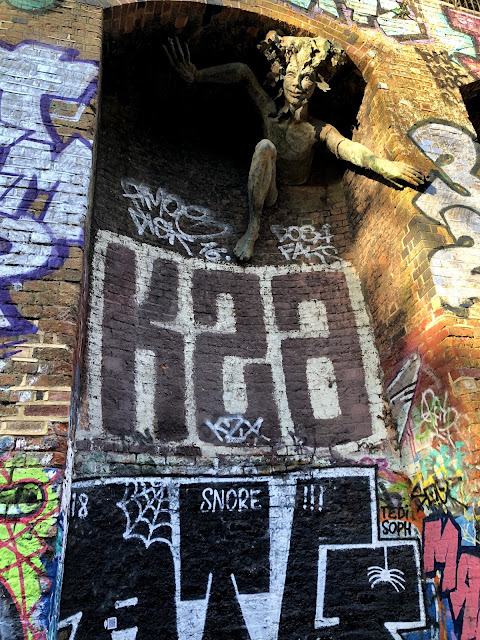 Artwork, Parkland
I meant to go from Highgate to Stoke Newington, doing part of the Parkland Walk, which is a beautiful walk across North London in what is now a nature reserve.
I decided to go to Highgate station, my starting point, by bus. But I took the wrong bus and got off at Archway which meant I had to retrace my steps and go to Highgate (on foot, by this time I thought I should get started on my walk). Then after getting to the wrong entry point and going in the opposite direction, I finally joined the Parkland Walk and arrived at Finsbury Park. At that point I was tired, thirsty - not enough water with me - and cold because I was not wearing a jacket (silly me!). From Finsbury Park to Stoke Newington it would have been another 4 miles, and it was getting darker. I went back home by bus. 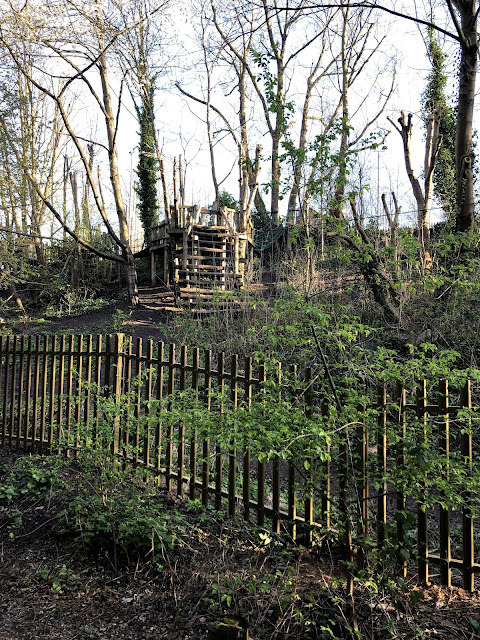 This morning I am feeling quite tired but elated. I will go back midweek and do the Finsbury Park to Stoke Newington tract, and then slowly I aim to cover all the 12 segments of the Capital Ring Walk.  I reckon that if I do it a few times, it will be proper training for Santiago de Compostela. Then, of course, I can go walking in Oxfordshire and various other scenic places.
Already my sister and I are exchanging notes. She 'whatsapped' me last night to enquire how many miles I had done - a bit of healthy competition is in place, it's normal among siblings. I am waiting to hear about her progress.
Walking is great for your bones, it is a weight-bearing exercise and coupled with other forms of exercise can do wonders for your health, as you get older. And it can also be something for which you can dress stylishly - but comfortably.

We still need Models of Diversity

It's the year 2019. People are now more attuned to the idea that beauty is diverse and that beauty standards have changed. Fewer people are dismissive of the view that models should represent the entire age spectrum and that their bodies should be of different sizes and abilities, to reflect the entire range of consumers. There is still some resistance to such ideas, of course, and a divide between those that are looking for realism and those who emphasise the aspirational quality of modelling.

Fashion has made tremendous strides; the advertising world still lags behind. Thus, for example, older people are now required to be 'eccentric' - as an older  model, I come across many casting calls where casting directors, on behalf of clients, ask to see older women attired and accessorised like Iris Apfell, as if showing eccentric older people were the only way old age stereotypes could be dismissed. How simplistic! It just means that one stereotype is substituted with another. Not all older people embrace eccentricity!

Thus when, a few days ago,  I came across an interview given by Phoebe Philo in 2014 to Alexandra Shulman, the then editor of British Vogue, I was somewhat taken aback by a couple of her statements. I just had to remind myself that it was five years ago and five years is a long time in fashion.

For those who may not quite remember, Phoebe Philo, British and female, Central St Martin's trained, led Céline until 2017. In 2018 Hedi Slimane, French and male, École du Louvre alumnus, took over and renamed the brand, now spelt Celine - sans l'accent aigu (without the acute accent). 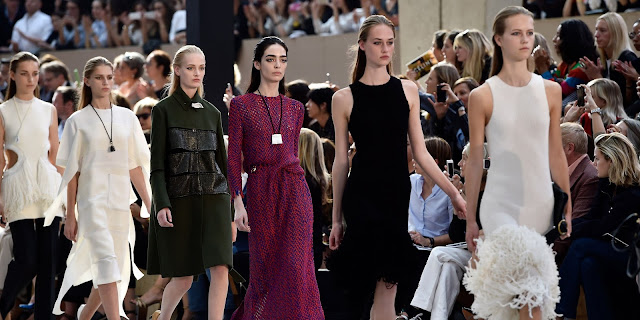 Phoebe Philo says in the interview "I think it would be unrealistic to think that human beings are not going to have some kind of worshipping for beautiful people because they always have. I think it's unrealistic to think that the fashion industry, the film industry, the sex industry are not going to have extreme ideas of beauty as a way of selling themselves. I don't really like it sometimes … What I really do believe is that anybody – and it really doesn't matter what shape your body is – can be seductive and sexy and gorgeous and beautiful. I use an extreme idea of beauty as a way of showing Céline, but I don't believe it has to be like that outside of the fashion show." Well then. In plain English, Phoebe Philo says that on the runway she will only have tall, very slim, preferably white (or as close as possible to the Caucasian ideal), very young models. Off the runway it would not be necessary, because let's face it, it would, among other things, limit sales. 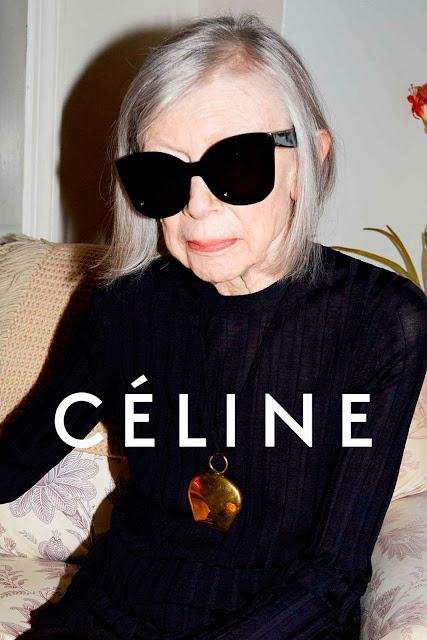 I clearly disagree with Philo Phoebe's idea of extreme beauty, whatever that is. I do, however, appreciate her honesty in acknowledging her biases and I continue to love her design work. And I will never forget that it was Phoebe Philo who broke the mould and used octagenarian, Joan Didion, in one of her campaigns. Of course, Didion is a celebrity, not an ordinary woman or a model. But still...

Celine will always be Céline, to me, thanks to Philo and what she brought to it.

In conclusion, diversity is part of the fabric of life. I do not think it can be stopped. Fashion can be more effectively representational, and models can still be aspirational, through parading their diversity. This is, hopefully,  the new beauty standard.


(I dedicate this post to Models of Diversity, who have been campaigning for a diversity of representation in the fashion and beauty industry for the past nine years.)
Posted by Alex B. at 12:29:00 No comments:

Reading Moby-Dick in my adult years

My last post was about languages and translation. I am continuing that thread adding to it. But first, let me retrace my steps. The talk at the London Library with Jhumpa Lahiri was excellent. It was primarily about her new book, a new translation in English of forty Italian authors which she has edited - curated, rather - and which includes one of her own. Her curation is very personal; the authors she has chosen reveal a personal bias and also mark her own trajectory and her relationship with Italian writing. I have the book, on loan from the library.  Umberto Eco is conspicuously absent, perhaps because his work has been translated ad nauseam. He was also very particular about how he was translated.  Eco had an excellent command of English and would not hesitate to query the choice of words by the translator. But I digress.  One of the authors selected  by Lahiri is Cesare Pavese, poet, novelist and translator, who was among the writers that opposed fascism and enthusiastically embraced American literature, which was not known at all in Italy at the time.   Pavese committed suicide in 1950, following a love affair that ended sourly. The New York Review of Books has a short article about him here, worth reading.
It was Pavese who introduced Herman Melville and his magnificent Moby-Dick to an Italian audience. His translation, which he did at the age of twenty-three (yes, twenty-three) and with a knowledge of English which was imperfect,  is fascinating precisely because it is more Pavese than Melville. It was later revised by Pavese, and in more recent years there have been other translations, more attuned to the original  - I don't like using the word 'faithful', although I realise that one of the aims of translation is accuracy.
But to translate Melville at such a young age is a feat. Indeed reading Moby-Dick at a young age is an impossible task. It is one of the most complex works ever, one that indeed belongs to world literature just as Cervantes, Tolstoy or Homer, among the ancients, do. I know that in America it is a set text in high school and students skip several chapters because Melville's Moby-Dick is not easy to read.
I first read it as a teenager, in Pavese's idiosyncratic translation. I did not grasp it. It was just this story about a frenzied captain, obsessed with a giant white whale and it did not move me at all. I tackled the original several years later and marvelled at the shifts in language register, with the prose sometimes resembling poetry and captain Ahab using a Shakespearean vocabulary (Pavese did not understand that).  The complex nautical lexicon had me grab a dictionary at every turn of phrase, I simply had no idea what all those words meant, being very unfamiliar with ships.


Now an adult, an older person, in fact, I have just begun re-reading it and I promise I will not skip the chapter on cetology which I used to think was so utterly boring. Why read Moby-Dick? why indeed read the classics? The two questions overlap. Moby-Dick is over 600 pages long and cannot be read fast, there have to be pauses and sentences have to be read more than once, to savour them. So it will be a while before I finish.  But one can always dip in and out.
Nathaniel Philbrick has written Why Read Moby-Dick and it is worth picking it up or just listen to the author discuss it on YouTube (above). Philbrick manages to convey the grandeur of Melville's masterpiece. And if you really can't bring yourself to read it, there is the excellent Moby Dick Big Read project, with the book read by Tilda Swinton and other artists, including Nathaniel Philbrick. It is Swinton who begins the Big Read with chapter 1, which opens with that crisp and terse 'Call me Ishmael'. And then the magic begins.