Photographs that make a change 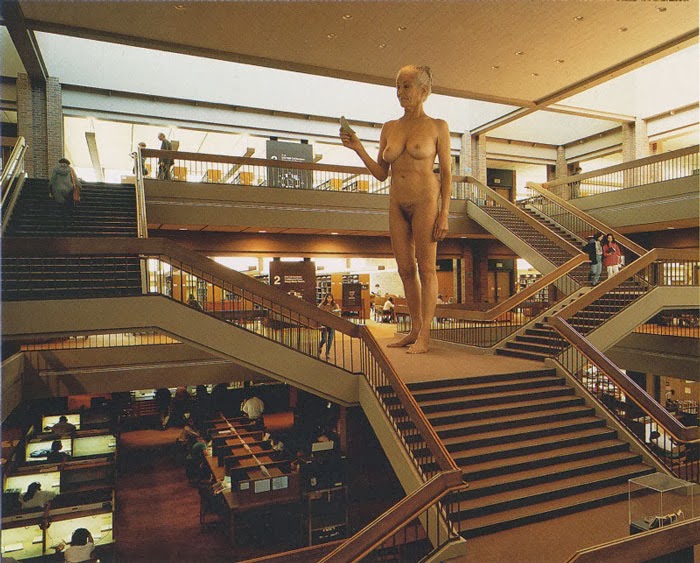 The Giant by Jeff Wall. From :Museomagazine.com

As a model and as an older woman, I am very interested in how age is portrayed in photographic images. I have also taken up self portraiture and now that I have finally got a digital camera I plan to spend more time photographing myself than I ever did before, when I worked only with film and was somewhat constrained by the medium. I love film but gone are the days when you could use several rolls and never worry about making mistakes. Now film is very expensive to buy and to develop and you really have to know what you are doing, which certainly does not encourage experimentation. But I digress.
I had heard of Jeff Wall before, who has not, he is one of those names on everyone's lips, at least everyone who claims to have a passing interest in photography. But I had never seen The Giant, a work made by Wall in 1992, until it was shown by Margaret Gullette in a recent presentation at the London College of Fashion last October in which she made an impassioned plea for a change in the way older people are portrayed in photographic works. 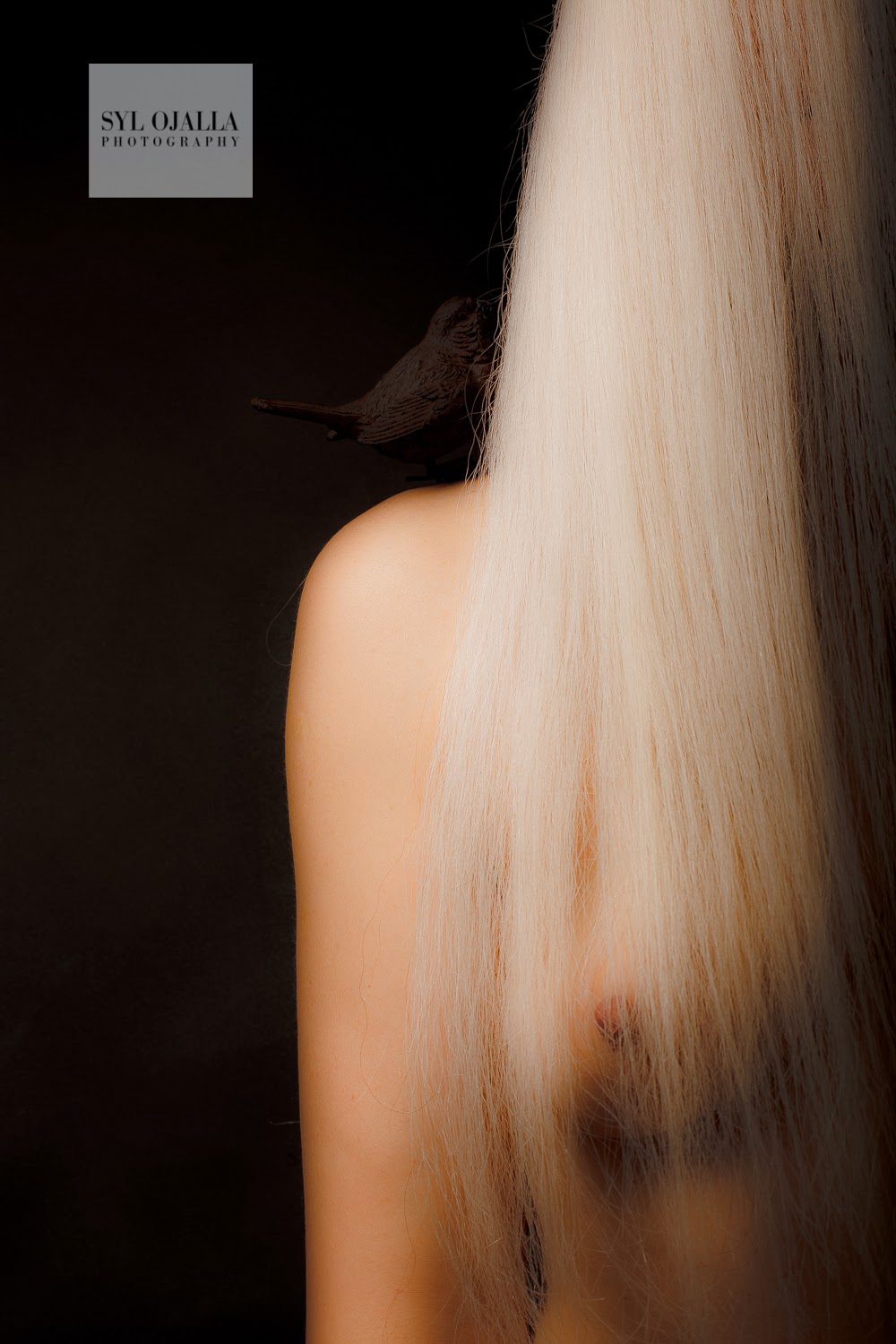 Photographer: Sy Ojalla. Model: myself
The Giant shows an old woman, naked, on a library staircase, holding a scrap of paper in her hand and intent on examining it. She is tall and erect and looks as if she belongs to the land of Gulliver's  Brobdingnagians. Around her there are people going about their business, all much smaller than she is. It is obvious that this effect was achieved through digital manipulation, but this is not what I wish to dwell upon. The woman's white/grey hair is tied in a knot, her breasts are large and heavy, her skin sags in places, her muscles show a hint of wastage: her body is marked by some clear signs of old age. But her posture and overall poise are such that there is a sense of great dignity associated with her nakedness, which also marks her vulnerability. She is, undoubtedly, the focal point of this composition.
Anca Cristofovici suggests that through this picture a complete inversion is achieved by the photographer in the way we look at old age: "we might, then, read this image of an older woman's body framed by an irregular pattern as an ironic transcendence of age, for despite the unabashed display of her naked body, the composition of the work turns the viewer's attention towards inner spaces. Its syncopated visual rhythms echo the conflicts between internal and external perceptions of age". 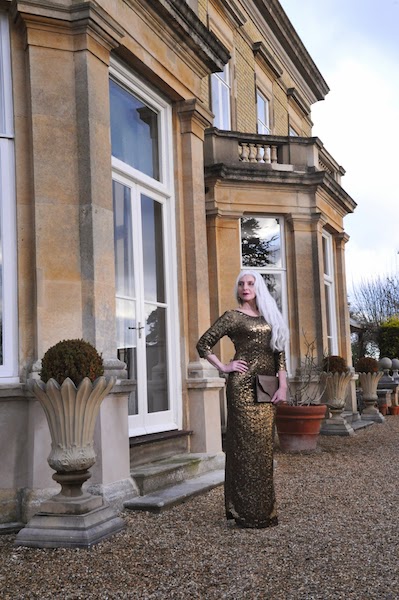 Last August I wrote a post for the Model Society blog, about older bodies in photography.
I am repeating myself here. But I think it is important we start rethinking our obsession with youth. Photographic images of older people which defy the convention of portraying them as decrepit will help to make this change.

The title of this blog post has been borrowed from one of the chapters in Anca Cristofovici's book Touching surfaces. Photographic aesthetics, temporality, aging (2009) 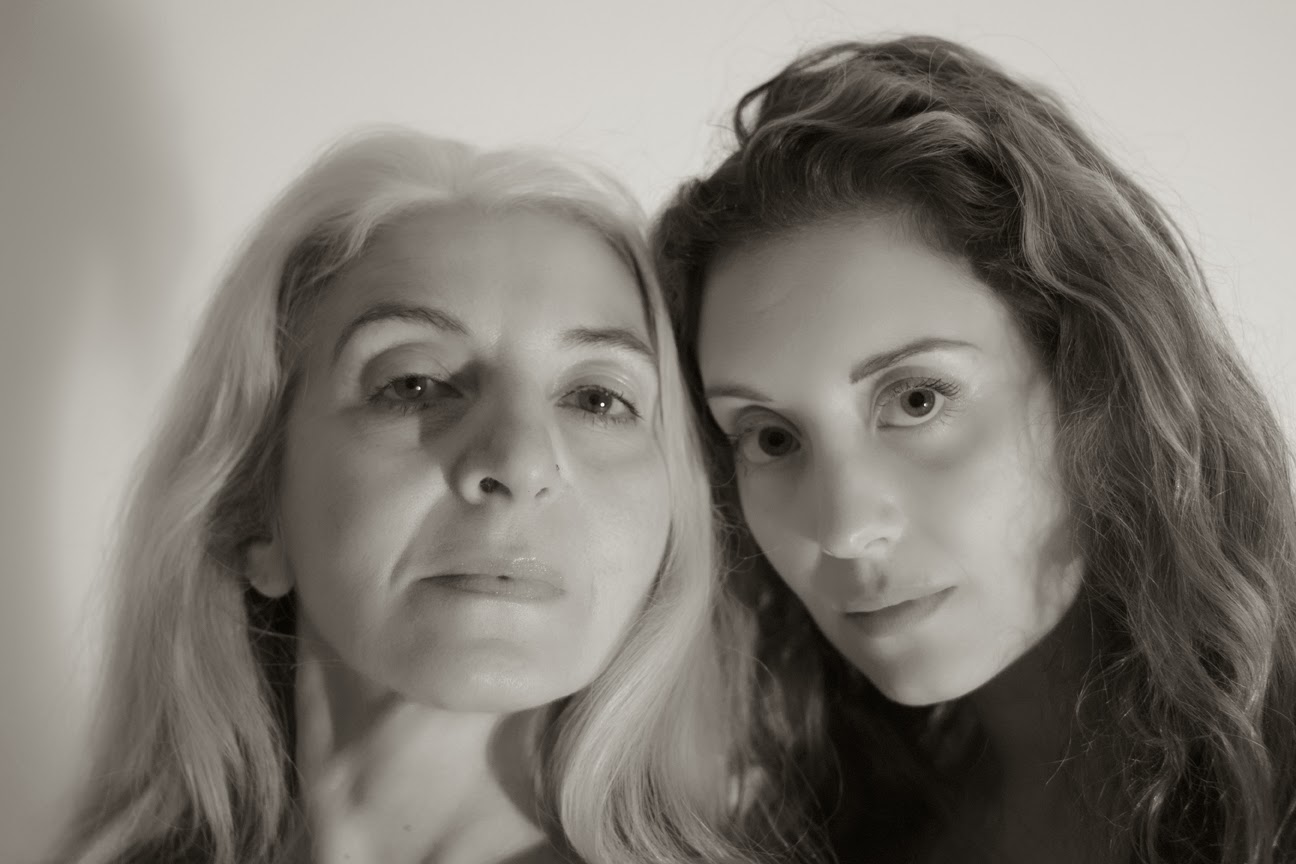 It has now become fairly widespread to discuss the invisibility of older women. Articles and blogs appear to have embraced the term. "Older women are invisible", that's always the starting point of any discussion on the topic of age and ageism. But a recent conversation with a friend of mine, Denise, who happens to be non-caucasian, made me rethink this whole issue.
She is of Afro-Caribbean origin, a couple of years older than me, a mother of three. She has a background in education and is currently doing a little modelling, mainly as an extra.
I was praising to her the far-sightedness of a feature which appears regularly in the weekend magazine of The Guardian, the Fashion for all Ages. I have not seen anything like it anywhere else, this is a fashion feature which uses models of all ages, styled to show how the same type of garment can be used, differently, by women (and men, as sometimes there are features about men) of all ages. The key word is style. Proudly, I showed her the few issues of the magazine in which I had modelled for the feature. She looked with great interest and then said, with a smile "Do you realise how tokenistic this feature is? All I see is older white models. Do you mean to tell me that older women of colour do not exist? That they cannot be stylish?". 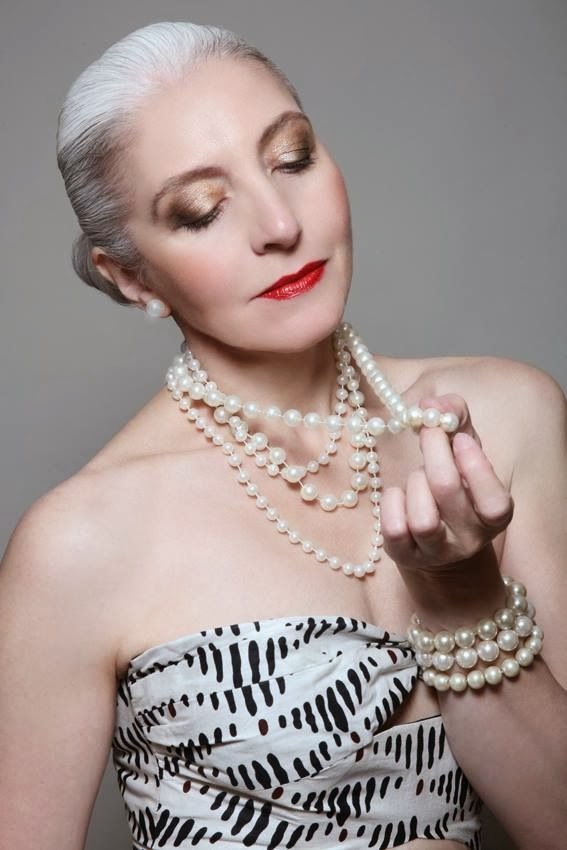 I was taken aback and felt at a loss for words. I had never considered it from that angle. "But look", I said "Look. The young models are not all white". She smiled again. "No, but show me older models in here that are not caucasian". On my iPad I searched for earlier features, going back to 2009 and found only two, part of the same shoot, with an older non-white model named Gloria. "That was five years ago, when they had just started the feature" said Denise "Five years. I rest my case".
I was mortified, I felt somewhat complicit. Of course, I have nothing to do with how the feature is run, I only modelled a few times for it and that was last year. But I suddenly saw it in a different light and I realised that the category 'older women' is extremely broad and does nothing to eliminate other differences. Race is definitely one of them.
Fashion is ageist but also terribly racist. The worst form of racism is the subtle one, the one that does not even seem to exist. 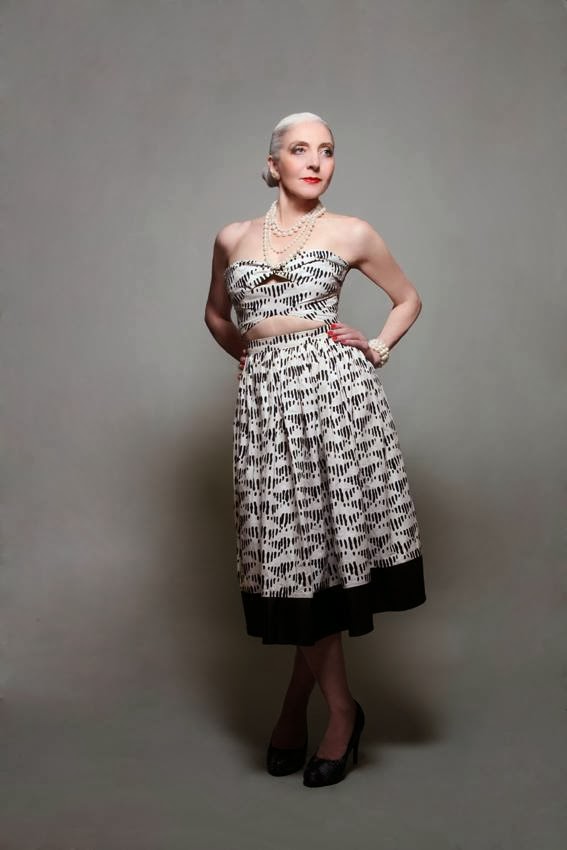 "You may be invisible" Denise told me "but I am doubly invisible, because of my age and my colour. A young model of colour will now and again be seen. An older model of colour? Only if your name is Iman or Naomi, and even then, parsimoniously."
I will be scrutinising fashion periodicals from now on to see whether there is any feature with older models of colour, but I fear Denise is right. Meanwhile I am writing to The Guardian, Lifestyle section, as a reader and activist. Something like:
Dear Guardian Fashion for All Ages, can we please see more older models with a diverse ethnic background? Can we not have older women represented only by tallish, thin Caucasian models?Yours sincerely, Alex
I doubt this will have an impact but, you never know, it is worth trying. 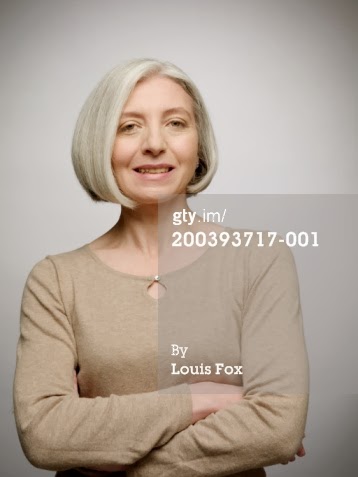 A friend of mine sent an email yesterday asking me whether I had seen "this". I looked at it and was horrified. It was a picture of me, it definitely was me, though the image was old - I could not immediately recall where it had been taken. Wearing a beige jumper arms crossed, my hair in a bob. Hair in a bob? it must have been some seven to eight years ago. Nothing wrong with it. But the caption was very wrong. It was an ad for a sex dating site that specialises in 'mature'. By saying 'click here' it implied there would be images of me in lascivious attitudes. I immediately wanted to know where it came from. My friend was unable to point me to any specific website, it was a pop up ad.
I did a little research, found a couple of sites that could be the culprit, fired off an email asking them to take my photo down. But obviously it's a waste of time. I do not even hold the copyright. However another photographer friend told me that when images are syndicated, agencies do not allow them to be used by 'adult' sites and it was worth complaining to them.
So again with help I tracked down the agencies that hold these images of me and found out three of them stocked them: Getty, Masterfile and a Chinese one, FotoSearch . I don't quite understand how come so many picture libraries sell the same image but there you go. This morning I alerted Getty and Masterfile about a possible image theft but I do understand it will come to nothing. The pop up ad cannot easily be identified. 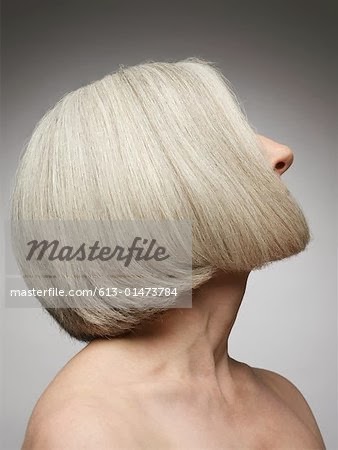 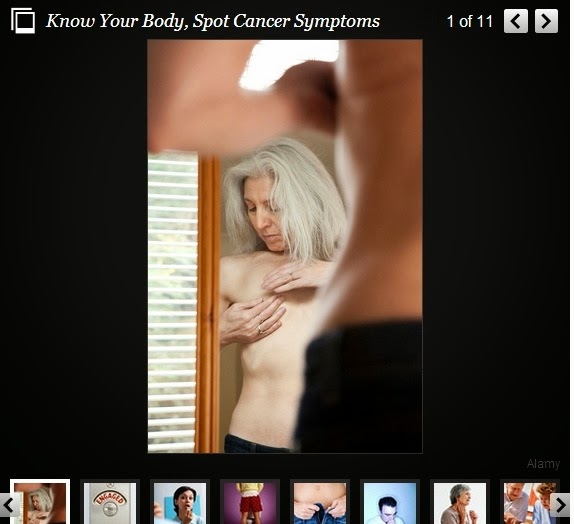 The other day photographer David John Green wrote that one of the pictures he took of me in 2009 has been published in the Huffington Post to illustrate an article about breast cancer.
So despite everything I am glad about this incident. It has allowed me to recover photos I had completely forgotten about.
I do like that bob!

A new year and my fourth year blogging 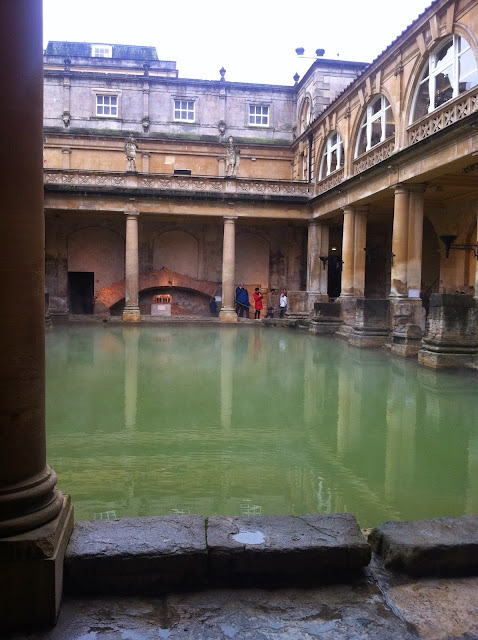 So here we are, 2014 has just begun, the long Christmas break is nearly over, and many of us are busy making various new year's resolutions or finally implementing long awaited changes. This will be my fourth year blogging, it is quite amazing I have managed to stick to it for this long!
I ended up 2013 in style, spending the day at my favourite spa, in Bath, a most charming city. I loved being immersed in water, walking in and out of the steam rooms and ending it all with a great watsu massage, where the therapist applies shiatsu principles and manipulates your body while you float in water. What an experience! I will be looking for more opportunities to have it done again, not necessarily in Bath - though for me the attraction of Bath is in its amazing water, not to be found elsewhere.
Today I had a very leisurely day, contemplating the various tasks ahead of me, reconnecting with my sister and my brother and chatting with them, writing, getting my cameras out as I want to start taking photos again, especially with my old Bronica and beginning the process of tidying up. I do need some decluttering!
A very interesting article was shared by some of my Facebook friends and I am sharing it via this blog. 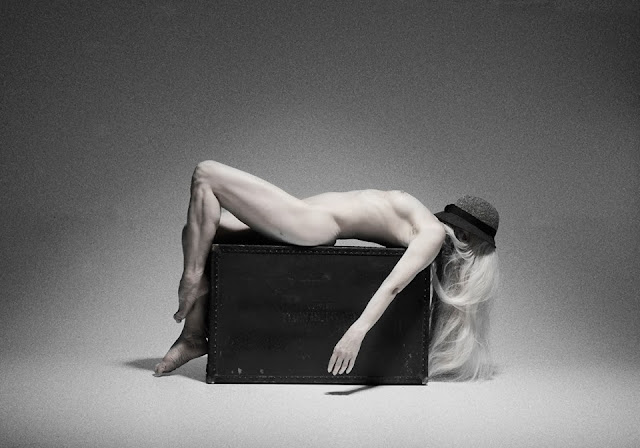 The article discusses some recent research carried out at the University of Winsconsin-Madison in collaboration with Spanish and French  biomedical researchers. It seems, according to the research, that the practice of mindfulness, achieved through meditation techniques, can effect specific molecular changes in the body - here I quote:
"After eight hours of mindfulness practice, the meditators showed a range of genetic and molecular differences, including altered levels of gene-regulating machinery and reduced levels of pro-inflammatory genes, which in turn correlated with faster physical recovery from a stressful situation".
This is not the first time that claims are made about the power of the mind to affect the world around us, beginning with our very own body.
Perhaps it is high time to think of mind and body as a continuum rather than separate entities?
I find the thought that my state of mind can affect my body quite empowering.
So let's start the new year with a positive attitude and soon we will see its effect on us and our environment.