The Trojan Horse at the British Museum 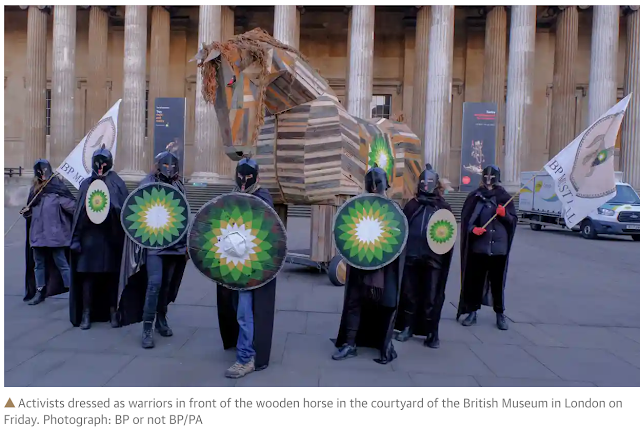 The exhibition Troy: Myth and Reality has been on for a while at the British Museum, attracting thousands of visitors, including hundreds of school children. It is, however, a controversial exhibition,  because it is sponsored by BP.  It is for this reason that the group "BP or not BP" brought, on 7th February, a Trojan Horse to the museum and stationed it in the large forecourt at the main entrance (subsequently removed by police).
Activist Helen Glynn explained: "The Troy exhibition has inspired us to create this magnificent beast because the Trojan horse is the perfect metaphor for BP sponsorship. On its surface, the sponsorship looks like a generous gift, but inside lurks death and destruction.”
Hettie Judah wrote a thoughtful piece for the Evening Standard highlighting the problems of accepting money for cultural sponsorship from corporations that are trying to 'clean up' their act. According to Culture Unstained, a campaign and research group, "these sponsorship deals have nothing to do with philanthropy, they are a cheap form of advertising, a cost-effective way for unethical industries to boost their image".
The list of such companies goes on. BP has regularly sponsored the British Museum; Sackler has given plenty of money to the National Portrait Gallery. It would seem that art sponsorship is a form of money -laundering. Or is it?
Novelist Ahdaf Soueif, former trustee of the British Museum, chose to resign back in July because the long term association of the Museum with BP and the Museum's colonialist legacy made it impossible for her to carry on in her role. She wrote an Op-Ed for the London Review of Books in which she discusses the museum's treatment of low-paid, contracted workers, its relationship with BP which no one wishes to question in fear of alienating the business community, and its reluctance to restitute artefacts belonging the African nations, literally stolen during the colonial era.
The museum defends its relationship with BP, saying that putting on temporary exhibitions is a costly affair, the exhibitions are beneficial to and welcome by the general public and they just could not happen without this external support. We all know too well the Museum's stance on restitution: it is and always has been a resounding no because the artefacts now belong to the British nation.  Go figure that one: I steal from you, I keep the loot in my home for a few decades and it then becomes mine, you can't have it back. That's the idea.
The issue of sponsorship is a moral conundrum. I abhor these conglomerates' exploitative policies,  the threat they pose to the planet, yet I also love the exhibitions. I have a granddaughter. In a few years time, when she is ready to enjoy them,  should I stop her from viewing these exhibitions because they are unethically funded? I sound pessimistic here as if I were convinced that the practice of accepting 'tainted' money is not going to stop. Honestly, it will not, not in the foreseeable future, not in the present political climate. I agree with the Museum that exhibitions are costly - where is the money to be found? 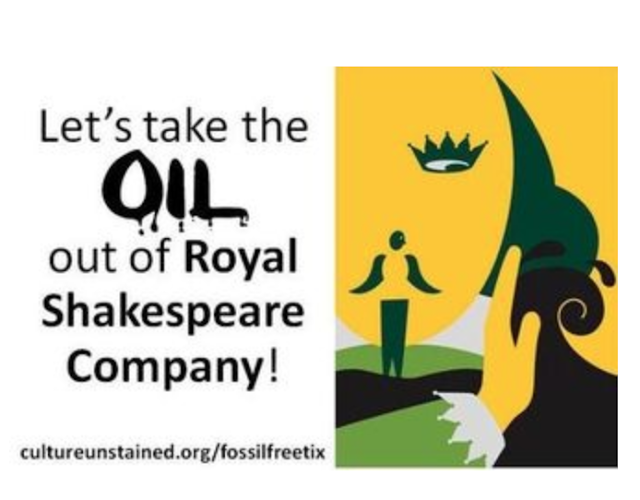 Art funding from the government is pretty low, simply not enough, with plenty of cuts implemented on a yearly basis. 'Who needs art?' seems to be the attitude. At least, and unlike other countries, the British Museum (and other museums too) does not charge for entry to view the permanent collections - when the Tories introduced museum charges under Thatcher, the British Museum was the only one that stood its ground and refused to implement them. Fortunately, charges were scrapped, except for exhibitions, which are ticketed: people need museums and need free access to them. There are other ways to raise money from the general public: shops, cafés, membership deals...
I dislike BP, I dislike its exploitative thrust. I know that exhibition sponsoring is a form of glorified money laundering, yet part of me is unable to say 'stop taking the money'.
What I would like to see, instead, is some honest, fruitful, discussion on art funding and robust initiatives that can help museums to wean themselves on their dependence on 'dirty' sponsorship.
At the end of the day, we need to ask ourselves whether we care about our museums and what we can do, as a community, to help them thrive.


Read more about this issue here and here and on the Culture Unstained website
Posted by Alex B. at 10:32:00 No comments:

Brexit, freedom of movement and modelling 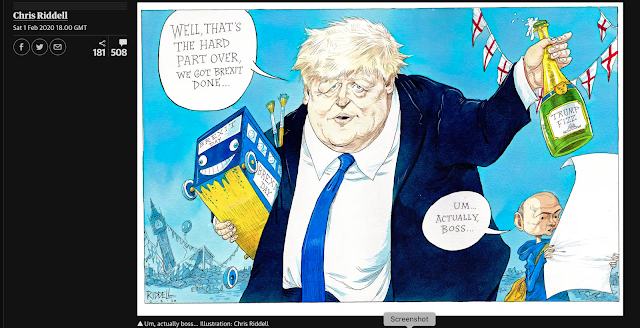 We got Brexit done. screenshot of The Guardian/Observer cartoon sat 1st feb

And so it has happened.  Friday 31st January was Brexit Day. I am astounded that it should have really come to pass. What next?
The answer is we do not know, beyond the rhetoric of taking back control. As I write, our esteemed PM has just claimed that there will be no concessions to the  EU in negotiations, hinting at the possibility of a 'no -deal' to please hardliners. However, the truth is that the EU can live without Britain, which seems to suffer from delusions of grandeur but in reality, is ready to stand to attention for Mr Trump's orders.
Ian McEwan has written a very incisive opinion piece for the Guardian/Observer "Brexit, the most pointless, masochistic ambition in our country's history, is done" - incidentally his novella The Cockroach, inspired by Kafka,  is absolutely brilliant, a masterful political satire in the tradition of Jonathan Swift. But satire, unfortunately, as McEwan concedes, also with reference to Swift, does not have the power to effect changes.
I am a fan of McEwan but even if you are not, his opinion piece is worth reading and mulling over.
I don't dabble in politics, but this is different.  As an EU in Britain, unlike many other EU nationals less fortunate than me, I am not under the pressure of having to prove my settled status. I became a dual national way before the Brexit debacle and only because at the time, already ten years after I entered the UK, I was embroiled in a custody battle, whereby becoming a British national seemed the best possible option. That was back at the end of the nineties.
But even with two passports, I still live in the UK, where I officially reside and where my home is. I pay taxes in the UK and nowhere else. I will be affected by Brexit like everyone else who lives in this country.
I just wanted to air here some of my concerns, as a model. People have debated the impact of Brexit on fashion but the impact on modelling as a form of employment somehow has not been discussed enough.
The point is this: most of the best-paid modelling jobs are not in the UK but in Europe.  Until now many of the castings for European jobs have taken place in London but this will change. For location shoots, the requirement was often only that your passport should be valid for at least six months, no work permit needed. This may well change after the transition period. In September 2018,  I was part of a major campaign by a known Swedish brand. I was hired through my agency, and when I was paid I was not double taxed. Fast forward to November 2019 and, in connection with another job, I had to pay upfront tax in the EU country where I was hired, which had never happened before.
For the next eleven months, people from Britain will be able to travel and work in the EU, as part of the transition period. But double taxation will become more common, even before any final agreement, as within the EU they are adjusting to the idea that Britain is an outsider, a third country. 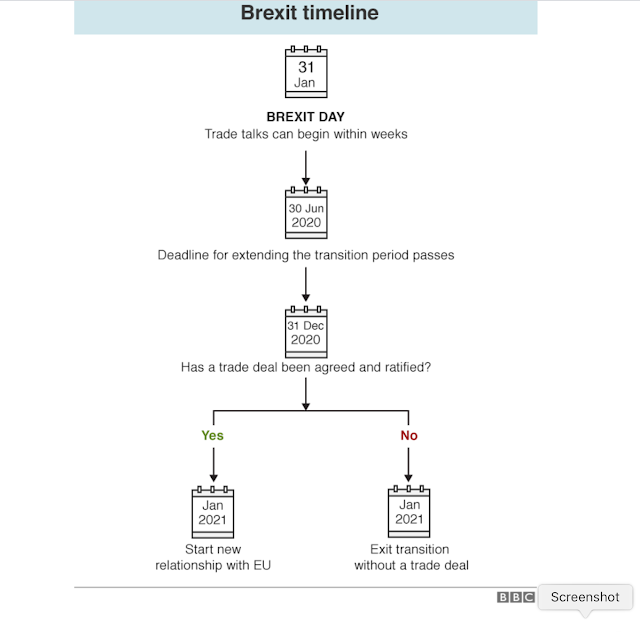 We don't know what will happen after that, it is not unlikely UK models will require a work permit, as indeed they do when they work in the States (it is highly illegal to work when entering the country on a tourist visa).
European countries are not short of model agencies and models, so why go through the bother of getting a UK model - unless she or he is really at the very top, brand names themselves - and having to go through the hassle of securing a work permit?
UK models may rejoice believing that they will be able to get all the UK jobs. Yes, they will. But standards of pay, already quite low within the UK, are likely to be even lower. We know that a local brand cannot pay as much as a Europe based international one.  Many UK brands will actually find it difficult to sell outside the UK, though of course, the government has promised fantastic trade deals with the US, Australia and any other country in the world.   I increasingly get the feeling it will be like the bus and the millions to be given to the NHS.
Modelling is not as glam as it may seem. There are serious issues concerning contracts and pay.
It is likely that the 'mother agency' business model will be implemented more thoroughly but it will not be UK agencies that will be 'mother agencies', it will be agencies based in Europe or major international agencies that will be 'mother agencies'.
Boutique model agencies will no doubt suffer, as well as models who do not have an agency, but freelance.
So if you are a UK based model,  do not start believing that Brexit is nothing to do with you, because it is. Modelling is work that requires freedom of movement. Now go figure the consequences of it being curtailed.


I would like to thank Rebecca Valentine at Grey for clarifying the issue of double taxation and freedom of movement for models.