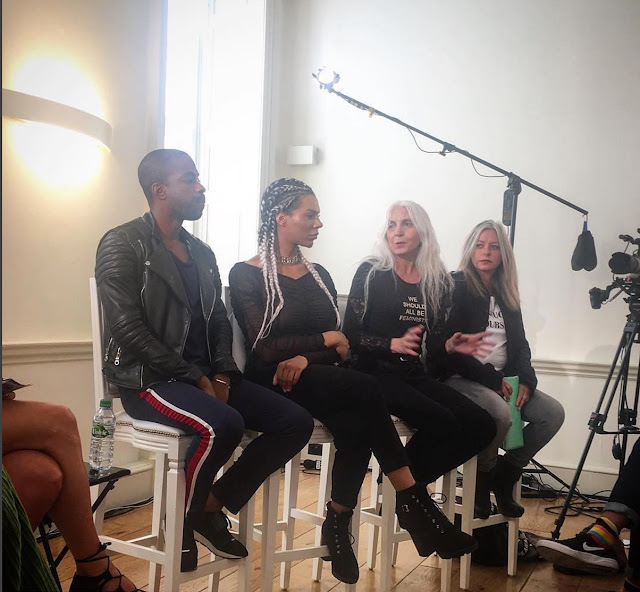 At LFW YahooStyleUK discussion about diversity on 15th September

Fashion has woken up to diversity and the industry is desperately trying to prove that the concept of a fashion for all has been taken on board.  Thus designers at NewYork Fashion Week, as also London Fashion Week 2018, which ended on 19th September, have been trying to include disabled, curvy and older models, in an attempt to tick boxes. There have been talks and TV programmes in which people have asked the question 'Is fashion embracing diversity?'
Well, is it?
Not quite. As LFW unfolded a model as famous as Leonie Anderson took to Twitter to say that she had been dropped of a LFW show for being black - she was later interviewed for BBC4 Woman's Hour, where she repeated her accusations of racism within the industry.  We have heard this before, Naomi Campbell has also famously spoken about it.
One cannot help thinking that the current endorsement of diversity  is all about making token gestures. Diversity is an uncomfortable notion, one which cannot be taken on without a complete overhaul of entrenched beliefs.
It would seem that  the idea of diversity is not aspirational enough. Designers claim that clothes fall better on long, slim frames (and should those frames belong to Caucasian women?). It's the only way to showcase clothes, we are told. Curvier bodies detract attention to the workmanship of clothes making. Older body frames are simply not attractive enough. And so on. But in fact those who wear the clothes come in all shapes and sizes. Brands are not generally known for selling clothes to just one type of customers, to an extent - some self selection does occur in terms of prices and range of sizes available but by and large if you can pay for the item you can have it, no matter what you look like. 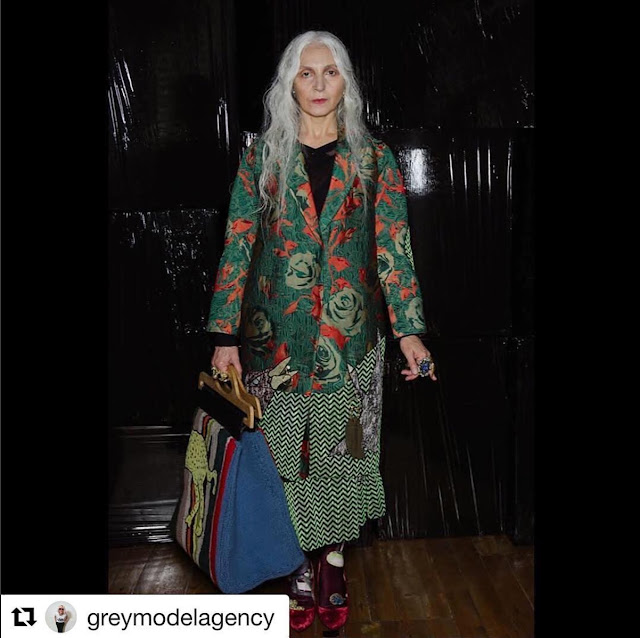 Modelling for Johanne Hynes at LFW on 15th September

Actually, if you want to showcase the fabric and the design you really do not need a living, breathing model. You need a mannikin and you have to allow people to get up close to your creation. Models are living beings and  they are meant to show how clothes can be worn.  Bodies are different, so you need a range of body shapes and types to showcase the way clothes fall on bodies, as well as  models of different ethnic backgrounds, because it is absurd that fashion should privilege a particular ethnicity.  Everyone wears clothes. It is also wrong to expect models to be all the same, attempting to obliterate or tone down  ethnic differences, rather than celebrating them.
It is most unfortunate that diversity is understood to be a way of pigeon holing people. Ticking boxes is not about promoting diversity, it's about making sure that minimum requirements are met so that one is not seen as being on the wrong side of the law - for it is unlawful to discriminate, even though subtle discrimination goes on all the time, as Anderson avows.
Fashion weeks are changing, now the format is see it now, buy it now. The shows are spectacles. So I do not buy this idea that changes are not possible because they are occurring all the time. Diversity can become the norm and it should. The future is truly in the hands of the next generation.
As Edward Enninful, the new Chief Editor of British Vogue has often said it is all about education. People need to be brought up appreciating and embracing diversity. There is far too much discrimination going on in society, we do not need fashion to be discriminatory. 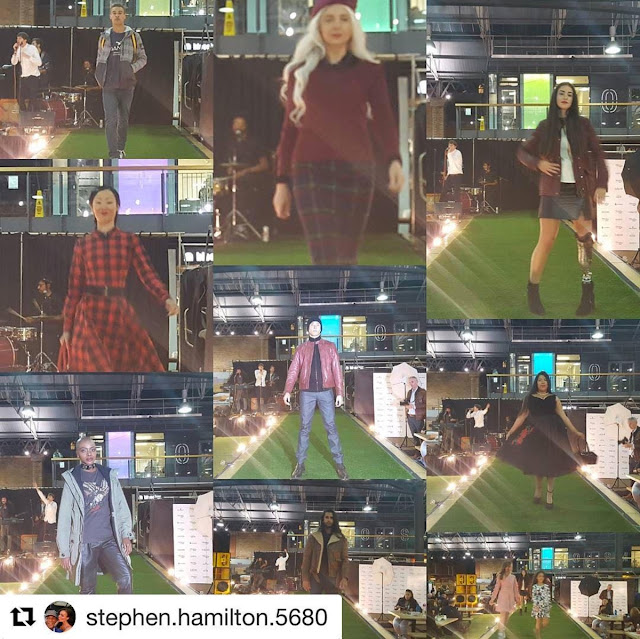 At the Models of Diversity show in Old Spitalfields Market, during LFW.


Let's hope that when the next fashion week comes we shall not be frantically be discussing  diversity and take part in TV programmes and round tables - as I did - asking the same questions all over again.

More thoughts on being petite and modelling

At the Fashionista Night Out fashion presentation  by London Ethnic

I have written about height in a previous post. I am now reprising the topic, focussing more specifically on models and modelling, as we know that the latter is affected by the politics of representation.

Being petite - or small or just plain short -  is still regarded, in our society, more or less as a physical defect, especially in fashion, where the arbitrary notion that clothes look better on tall women and men has become normative.
There are of course lines of clothing made specifically for petite women, who exist in multitudes and all need to wear clothes.  Petite fit models are used  for such clothes - those models one never sees,  the ones that go for measuring and fittings - but they are hardly ever modelled in catalogues or on TV shopping channels by petite models, so much so that several petite women have complained that not seeing a garment on a real petite body does not  give an idea of how the garment will look on them, as I mentioned in my earlier post.
It is also the case that petite women tend to be infantilised.  The fact they do sometimes have to shop in the children’s clothes section due to lack of choices has contributed to the perception of their being doll like, no more than children themselves.
The fashion world will tacitly endorse  the fiction that small models could never be seen on the runway but  it is a blatant lie. Quite a handful of well known models are well below that golden standard of 5’9-5'10 (sometimes lowered to 5’8) which is given as the minimum height for modelling fashion on the runway. In addition, in our celebrity driven era,  many celebrities are asked to model in high profile fashion events and their being  petite is inconsequential.
Because of this misconception  it is common practice to bump up models' heights sometimes of several inches, and the same is done for celebrities. Victoria Beckham was always said to be 5’6 when in fact she is 5’3. In 2000, when she was still known as Posh Spice,  she modelled on the runway for Maria Grachvogel, to the delight of paparazzi and bringing instant worldwide publicity to Grachvogel. And truly, she acquitted herself rather well.

Models' height at castings is  rarely measured and there are several methods for making oneself taller. I was recently at a fitting where the girl next to me maintained she was 5'9 and she was only slightly taller than myself, who am a good two inches shorter than 5'9.  A former male model launched an elevator shoes line after catching a fellow model duct taping five insoles in his shoes. (Similarly, there are several ways of bumping up BMI measurements to bypass the rule of not being below a certain BMI). Designers are more obsessed with female models' hip measurements than height and some designers have been known to recheck hip measurements  themselves prior to a show, just to make sure, as reported by sociologist and model Ashley Mears in her book Pricing Beauty (2011).
The anecdotic evidence I have provided is symptomatic of the fact that basically not being tall is regarded as something to be ashamed of and in need of disguising. As regards to women, it flies in the face of  research findings about the average height of the world female population, which is set at  below 5’4 with many variants, depending on ethnic groups. When I was in Indonesia doing research for my book on fashion in Asia  I came across countless women, I would say the majority, who were no taller than the 5 to 5’2 range. Does that mean they are to be regarded as ugly or lacking a fundamental beauty trait?  It shocked me to hear a designer at Jakarta Fashion Week say that in his view European women carried his clothes better because they are taller and with longer limbs than Indonesian women. 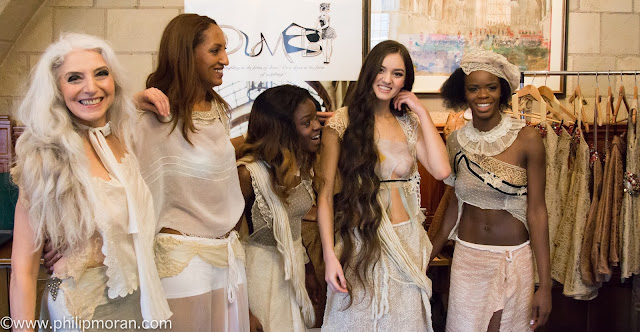 At the Houses of Parliament fashion show in November 2016 with models of different heights,  former model and now designer Ruth of Urban Roots Eco Couture right next to me. Photo: P.Moran

With all the talk of diversity, the issue of the height bias in our fashion culture has not really been properly addressed. It needs to be debunked. The countless articles in magazines about how to look taller are flawed just as those that dole out advice on how to make oneself look slimmer or paler (the latter a very common beauty topic in Asia and Africa).
The link between height, power and self esteem (or lack thereof) is a serious issue and it is problematic that fashion should actively participate in forging this false ideal of a tall beauty for both women and men, an idea that  is fundamentally flawed and ultimately based on racist stereotypes.
An area of modelling which does not seem to be affected by such prejudices and in which petite models are often welcomed with open arms is art modelling. It really is to do with ability to pose and create beautiful shapes with one's body, regardless of size, height included.
I am neither tall (as a model),  nor petite, currently measuring 5'7 in height, though 5'7 is already regarded as petite in fashion modelling, just think of Nicola Fox, the winner of America's Top Model cycle 13.  I used to be slightly taller than I am now  but age has caught up with me. Last year, at a show, in which only tall girls were modelling I was asked to wear higher heels than all the others so that we would look of a similar height when sashaying down the runway - this is an example of strategies for making one look taller. As an older woman,  I am painfully aware of osteoporosis, no pun intended, and also very conscious of the fact that older bodies shrink. I do my best to slow down the shrinking, to contain it through stretching and exercising, though perhaps it cannot fully be stopped, despite claims to the contrary. Still, it is worth a try. 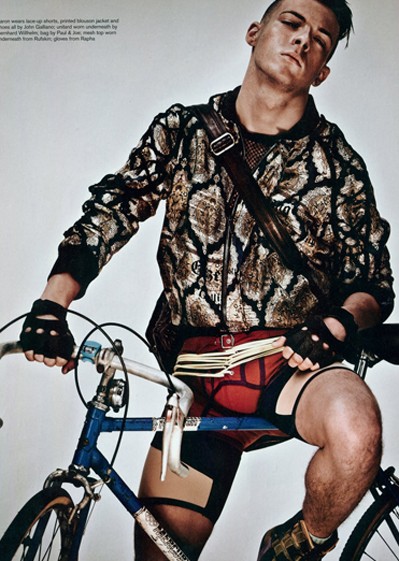 When I was younger, in my late teens and early twenties I would have been regarded as far too small to model fashion - it was the era of the Amazon beauties and I was not one. Later, when I started modelling because I had a 'look', not being of Amazonic proportions did not matter much, as people in fashion tend to look for character when casting older models.
But not being personally affected by this prejudice does not mean that I am not aware of its existence.  It truly is a misconception and one which should be quickly abandoned, because the idea  that clothes look better on tall women and men could not be further from the truth. Clothes look good on people who know how to carry themselves and can  fully express their height, no matter what this is , holding themselves with confidence and cultivating good posture, which also results in good health and a sleek look for tall and short people alike.