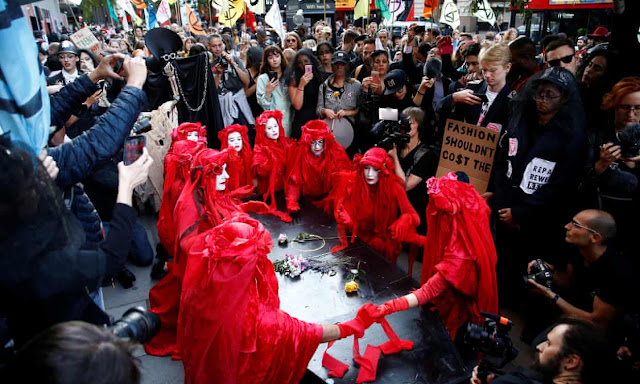 On the last day of London Fashion Week SS20, Extinction Rebellion staged its funeral, the culmination of a march which began in Trafalgar Square and ended at 180 The Strand, where fashion week shows had been taking place.
Theirs was a protest against fast fashion, in the wake of its ominous effects on the planet's climate. I  read about it in the news and I also read a very thoughtful article in The Guardian penned by Jess Carter-Morley on the role of fashion week in the age of late capitalism.
I was tempted to join the march but:
1. I agree with Extinction Rebellion that fast fashion is among the culprits; however, I am not totally sold on ER's methods and
2. I took part in London Fashion Week, although the show I was in was not among the mainstream ones staged by the British Fashion Council, but a complementary one staged by Fashion Scout ( I was also in two other ones which simply took place during fashion week, but had no connection with it). Joining the march would have been, for me, a case of cognitive dissonance.
As a model, I am caught up in the mystique of fashion week: I want to be on the runway, modelling for fashion week is regarded as a plum job, not because of the money, but because of the status it confers. Fashion Week, the Musical of Late Stage Capitalism, as Carter-Morley calls it, holds such an allure that even casting directors have been known to work for free on behalf of designers, to cast their models. 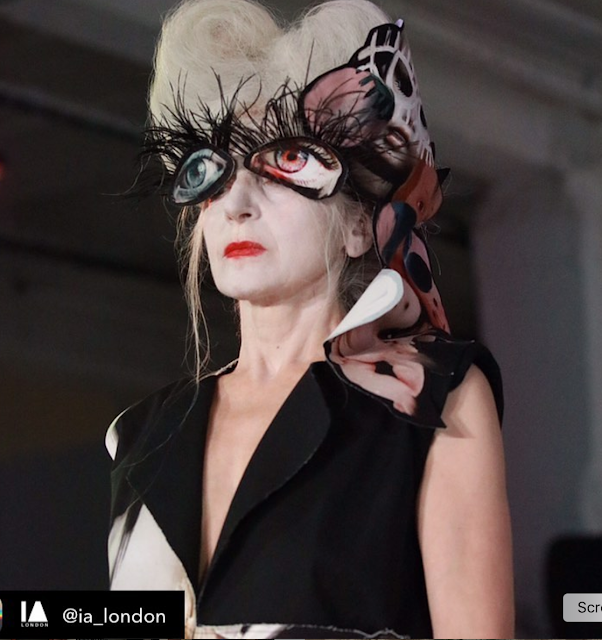 To me, at my age and with my height,  below the standard 5'10 now demanded for the runway, and also my size, over the 'runway standard' UK 6,  being cast for London Fashion Week  (or any other fashion week) matters. The presence of someone like me, one would argue, contributes to the diversity of representation. But I know it is only tokenistic and diverse casting is as perfunctory as can be. Tokenism does not bring change, it appeases and gives a 'feel-good factor' but does not change the status quo.  I had the wonderful experience of being called 'fat' and 'short' at a fitting by a much fatter and shorter female designer who was shocked I would not get into her size 2 gowns (American size). 'My clothes must be worn by tall and very slim models' she said, with conviction.
The gowns were pretty awful and I was glad I was spared, but the pitiful look she gave me, wondering why someone like me would even dare come near her clothes, made me realise that despite all the noise, the policy of positive representation is still, by and large,  pretty meaningless.
When I stop regarding the issue from my narrow model's perspective (I often wonder why I am still doing it, but that's another story), I know there is a real problem with the system and that the fashion week, with or without diverse representation in model casting, should go. This season  LFW was about #Positive Fashion, but as Maeve Campbell writes, only six events were part of PF.  It was by and large just a buzzword... 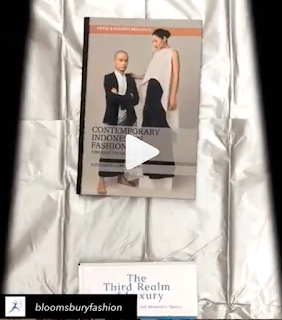 I do discuss such issues in my forthcoming book, Contemporary Indonesian Fashion. Through the Looking Glass, officially out on 31st October. Indonesian fashion is my case study but the discussion I offer involves fashion globally. I do talk about the exploitation of young designers, especially those from developing countries, willing to pay through their nose to dubious fashion event organisers in London or New York to have the privilege of doing a fashion show in these 'major fashion capitals'. I discuss how diversity becomes a meaningless keyword, just a hashtag because having one 'different' body among the models on the runway does not change anything. Actually, right now, transgenders are being coopted: with their natural height and very narrow hips, they are everything an old school designer wants (earlier it was very tall androgynous girls, perforce very young, with no hips and no breasts) and they add 'diversity' to the casting!  Who needs to have fat women, old or young, who will never do justice to the clothes...
But the point is that we do not need new clothes, we need a new way of wearing clothes, avoiding waste, avoiding exploitation at all levels. We need fashion for real bodies. Thus we do not need expensive fashion week shows. Surely, there are other ways for designers to engage with their prospective buyers and show their work. As a consumer (I cannot help being one, it is part and parcel of our capitalist society) I want to know that what I am wearing is durable and it has not been made by a woman or child paid a pittance somewhere in Asia, North Africa or even Eastern Europe. I want greater agency in the way I style myself, I do not need fashion trends. I want real diversity of representation in fashion as well as in life.

If we do away with the Fashion Week as such, it will not spell the end of fashion, only the demise of exploitative fashion. Extinction Rebellion has buried it. Let's join in a celebration. There is a 'hereafter' for fashion, now that the Fashion Week  has been buried.
Posted by Alex B. at 11:21:00 No comments: 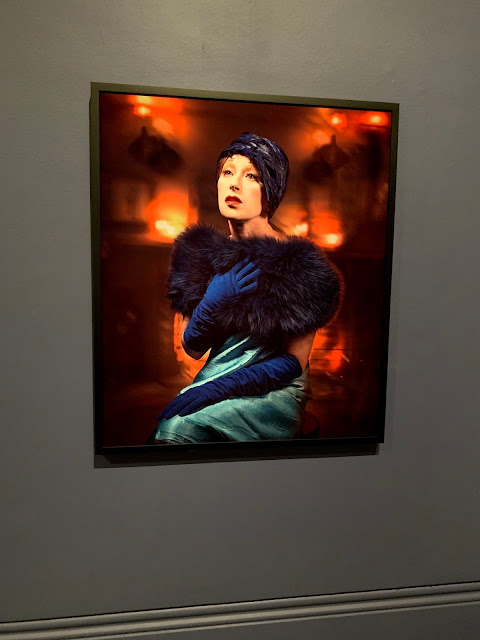 SecondHandSeptember and Cindy Sherman: what's the connection? None. Except that I finally went to see Cindy Sherman's exhibition at National Portrait Gallery on 1st September - it ends on 15th - and September is the month declared by Oxfam to be #secondhandseptember.
Let's start with Cindy Sherman. I have long admired this unique and extraordinary artist and her mastery over self-portraiture.
Indeed I was inspired to take up the camera and do some self-portraits, but I abandoned the idea when I realised I was repeating myself. That is certainly not Cindy Sherman's problem. Her creativity is boundless and the way she uses the camera for self-expression and social commentary is unparalleled.
I was particularly drawn to her commentary on fashion. In 1984 Sherman did a shoot for Vogue Paris, appearing depressed and dishevelled. her outfits were in utter contrast with the mood of the photos. Sherman is all set about exploding fashion as a myth and revealing it as illusionary. Paradoxically, this has gone down well with the purveyors of fashion, who have continued to commission Sherman.
After visiting the National Portrait Gallery I met with a dear friend and she reminded me that September is the month when people pledge not to buy new clothes: #secondhandseptember.
I totally agree with this and I like the fact that as the circus of fashion weeks begins, people are being reminded of how wasteful the fashion industry is. 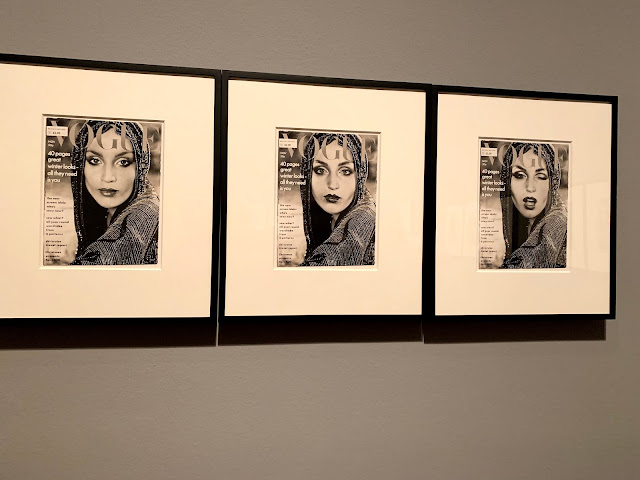 I have taken this pledge a bit further: I have shopped in charity shops for years but now I have also taken up dressmaking and I use charity shops to source fabric and old clothes which I then alter.  Dressmaking is my new hobby. No, I am not a designer - I am just a humble dressmaker. But I love my sewing machine and am teaching myself to stitch. I have even joined a FB group about sewing 19th-century costumes. I am quite ambitious, clearly, but sewing is such a wonderful past time.
And in a world in which fast fashion dominates and destroys our environment, let's pay some attention to clothes and what /how we wish to wear.
There is nothing more satisfying than wearing something you have made yourself. OK, I make mistakes, but this is how we learn. So far I have just been altering: turning trousers into skirts, long dresses into tunics, making a pinafore and all these simple things. 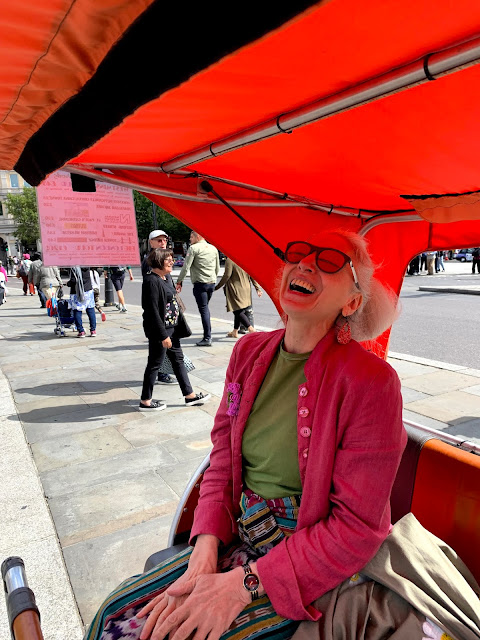 Wearing my hand made skirt in Trafalgar Square on 1st September

I have in mind to stitch something nice for my grandchild, due in December - I am still thinking about it, have not yet decided.  A blanket maybe? Or a christening gown?  I am carefully considering options.
Meanwhile, rest assured. I am not going to buy new clothes for at least a month. It is #secondhandseptember.
Posted by Alex B. at 13:27:00 No comments: