Too thin, too fat 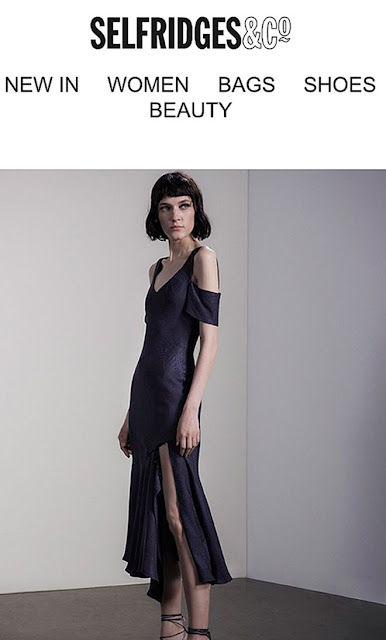 Selfridges have won their court case over their alleged socially irresponsible ad featuring  a very thin model, sent in a promotional email.
I am actually glad of this outcome, I think it's the right decision.
I am saying this because I embrace diversity and I am passionate about fashion representing different bodies and shapes. That is, precisely, the point.
We need to realise that some women and men are naturally thin and  their thinness should not be demonised.  Some other women and men are more bulky,  and that's fine too. This is what diversity is about.
Rather than taking Selfridges to court for featuring a model that is very slim (the photographic angle may have had its share in fostering this perception), on the basis that this might lead other women to follow unhealthy diets to be like the model, it would have made more sense to ask Selfridges whether the dress came in different sizes (which it probably does).  If so, could  one  see what the dress looks like on a fuller body? This kind of approach may indeed yield better results.
Embracing diversity does not mean that thin people should be policed and/or reviled.
Embracing diversity means that different ranges of bodies should be seen, side by side. This is what is going to make diversity normal.  Court cases and bans will not achieve the goal, rather they will continue to foster polarised attitudes.
I am an over-fifty model. It would be silly and extremely counterproductive  for me  to go round saying that younger models should be banned because it is ageist not to have older models in an ad. Or in fashion. And that seeing young models may lead people to depression or to undertake  dramatic cosmetic surgery procedures. 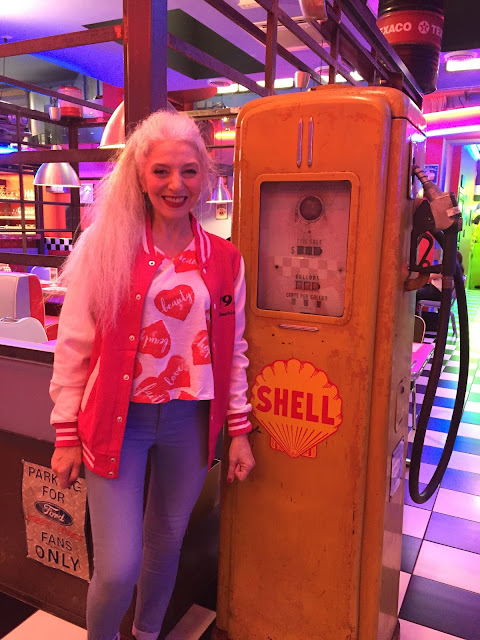 From my recent shoot with Emma Innocenti, Florence

What really needs to be said is that you can have older and younger models, thinner and curvier models, white and black models, because diversity is all about difference and being OK with it.
So I will not regard Selfridges' win as a loss to the cause of diversity in fashion.
On the contrary.

A love affair with ancient Greek 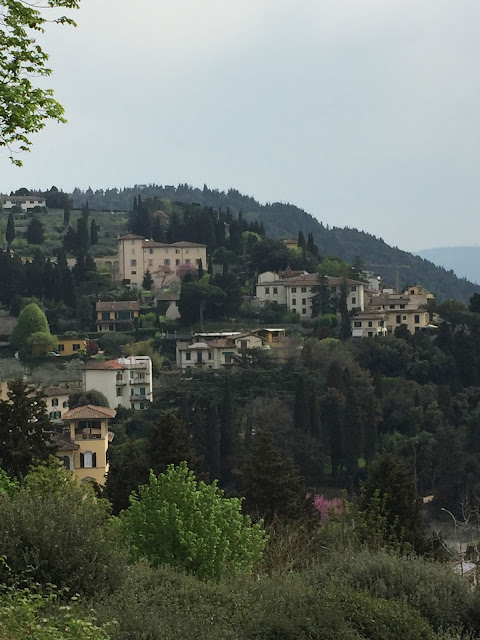 Fiesole, Tuscany
I was in Florence last week - model life. At  Santa Maria Novella, the railway station,  I went for a browse in the Feltrinelli bookshop, Feltrinelli being a famous publishing company with a chain of bookstores throughout Italy. The shop  has also its own café, which is of course very handy, especially for travellers in transit, like I was . You know the scenario, it's just like any other metropolitan railway station, Waterstones in London Victoria comes to mind (come to think of it, I do not remember seeing a café there.)
I was early for my Milan bound train and wanted something to read, so I began to scan the shelves to find some book that was not a translation of an American/Canadian/English  paperback. Then I saw it.  It's in Italian, not yet translated into English (though I hope it will be very soon), by Andrea Marcolongo, a wonderful storyteller,  and it's called (my translation) "The Clever Language. 9 reasons to love Greek" (La lingua geniale. 9 ragioni per amare il Greco).
Greek of course is ancient Greek.
I just had to buy it. I read the book in one go and could not tear myself away. I know exactly what Andrea Marcolongo  is talking about. I too studied ancient Greek in school, I too memorised declensions and paradigms, I too fell under the spell of this extraordinary language and then I too grew disaffected, and could not see the point of studying  it, as my teachers kept on expecting tons of homework and translations - oh those versioni, often scribbled late at night, when I just could not make sense of anything (I had other subjects to study too!). 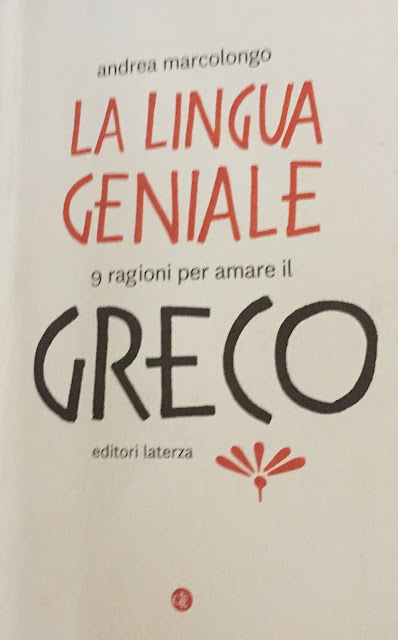 And I too, once I left the liceo (all Italian liceos are named after some famous literary figure and my liceo was the Liceo Classico Socrates - obviously!) burnt my Greek boats, so to speak, and never looked back.
But ancient Greek is always there, lurking beneath the many layers of my linguistic make up and deeply rooted in my soul, my psyche ( a lovely Greek word, of course) . I can still read Greek, I mean the script. I instantly recognise  all the words that come from Greek in any European language (yes, it is our so-called European heritage) and can easily tell what they mean.
In her wonderful essay "On not knowing Greek" Virginia Woolf , who was quite besotted with Greek, writes:
"it is the language that has us most in bondage: the desire for which perpetually lures us back. First there is compactness of expression...every ounce of fat has been pared off, leaving the flesh firm. Then spare and bare as it is, no language can move more quickly, dancing, shaking, all alive, but controlled".  Ancient Greek is a sleek language!
I recently helped a young philosophy student who was struggling with Aristotle - I do many things and occasionally turn into a tutor - and together we read the annotated  translation and commentary by American philosopher Eugene Gendlin (he-of-the- felt-sense) of Peri Psyche, otherwise known by its Latin name De Anima (About the Soul) which discusses the ontology of the nous (mind). My Greek is too rusty to read Aristotle in the original without a word by word translation but while going through Gendlin's  (a labour of love which took him thirty years) I did of course glance at the Greek and its terseness, clarity and pragmatic style struck me. By the way I am not doing this on purpose, these words are part and parcel of the English language but I have used 'ontology' and 'pragmatic' which are of course Greek -derived. 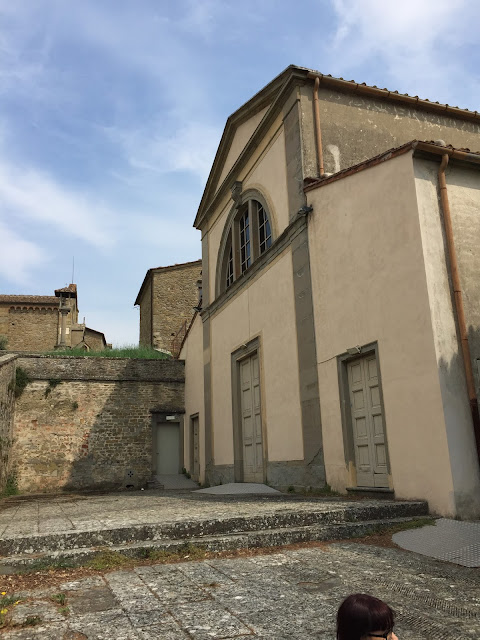 Fiesole, Tuscany
Andrea Marcolongo's book is not a grammar, it is the story of her love for ancient Greek. You do not even need to know a single word of ancient Greek to enjoy this book, which tells you, basically, how the ancient Greeks viewed the world. Reading this book, as an adult, you do learn to look at the world differently. The book is available in a host of other languages, including French, but as I said, no English yet. I wonder whether this is because people in England no longer study Greek in school.  I regard it as a loss, but then I would, wouldn't I?
Thinking back, I believe that engaging with Greek (Latin too, but to a much lesser extent) while I was an adolescent was one of the most formative experiences of my life, despite the tears and the unpleasantness of all that homework. I would not be who I am today, had it not been for ancient Greek. It's difficult to tell why or how,  but ancient Greek touched me to the core.
Let me quote  Virginia Woolf once again, as a way to end this post.  She says
"It is to the [ancient] Greeks that we turn when we are sick of the vagueness, of the confusion, of the Christianity and its consolations, of our own age".
Vagueness and confusion surround us. Still. Time to be rescued by the power of ancient Greek.

The National Gallery has an exhibition on at the moment, sponsored by Credit Suisse,  about the Italian Renaissance sculptors/painters, Michelangelo and Sebastiano, focussing on the relationship between the two artists, who were as thick as thieves for some twenty-five years. This post is not really  a review of the exhibition, which I saw last night , but a reflection on some issues that the exhibition threw up. I did some reading about the exhibition prior to going  and watched an online video of a talk given by the curator. So I knew what to expect.  Thus if you think that the Sistine Chapel has been moved to the NG and that the original Pieta is in the exhibition, you are of course mistaken.


The point of curating these exhibitions is to develop an art historical theme and illustrate it as best as possible. I go to an exhibition such as this for the curating, and never expect  to view more than a handful of original art works, especially if the exhibition is about Italian Renaissance art. I know I have to fly to Rome or Florence to see most of these works and that does not upset me in the least. Until now this has been quite easy to do, though perhaps things are about to change, once visas to EU countries are introduced for British people and cheap flights are curbed. Much European art will be entirely out of the reach of the average British person, as it will be expensive to access it.


The exhibition is not in the least disappointing. There are works borrowed from a few sources, including a couple of drawings graciously loaned by the Queen. There is an incredible digital reconstruction of the Borgherini Chapel in Rome (which I have seen!) with  one of Sebastiano's most famous frescos, the Flagellation and Transfiguration.


But what really struck me was how masculine the Madonnas were, especially the one in Sebastiano's Lamentation over the dead body of Christ, an oil on loan from the Museo Civico of Viterbo.
It is  well known that Renaissance models were all male. The Madonnas we see in  such paintings were men in women's  clothing. We have to wait for Caravaggio to find real female bodies - mostly prostitutes, as respectable women did not model and the ones whose portraits were commissioned - aristocratic ladies and queens - certainly were never painted in a state of undress.

People tend to forget this fact about male models in female clothing but it certainly provides  a newer  angle when considering contemporary controversies about real women  and beauty standards. The beautiful Madonnas of the Renaissance were men en travesti.  Classical beauty, at least in the version touted in Renaissance times,  is inflected in the masculine rather than the feminine. Next time you see a Renaissance painting of a stunning Madonna look carefully, it's probably a boy if not a grown man, with breasts added to turn him into a female. You will also notice how athletic and muscular the various Christs are, the ones in the paintings I saw yesterday could have been body builders, even the Christ in the famous Michelangelo's Pietà, which he created when he was just twentyfive years old  (seen in a plaster cast, original in the Vatican) has the body of a Greek god. 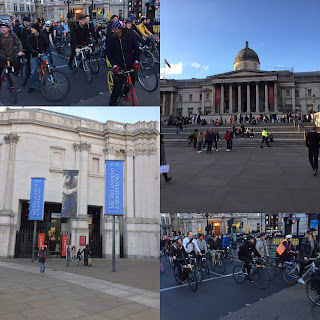 National Gallery and a stream of cyclists

Madonnas with  baby Jesus , the quintessential depiction of motherhood, were posed by men. Women were not deemed to be good enough to be drawn or sculpted, not even in what was regarded as their domain, that of motherhood.  Because the whole point was not so much that there were not female models - there would have been women willing to undress (or dress up) and pose - but that female bodies were imperfect, only men' s bodies could be drawn to achieve perfection.

Jill Burke writes in her art history blog that:

"There are good reasons, therefore, beyond convenience, why Renaissance artists might study a male model as the basis for their female figures. What we need to do when looking at this type of Renaissance nude is to disassociate ourselves from expectations of naturalism and to recalibrate our understanding of what is beautiful". Definitely, I could not disagree.
But we also need to bear in mind the profound misogyny that characterised a great deal of historical attitudes to women and their bodies and how that misogyny persists when creating arbitrary beauty standards in our contemporary world.