The rise and fall of Anniesa Hasibuan: fraud, exploitation and a tainted fashion industry 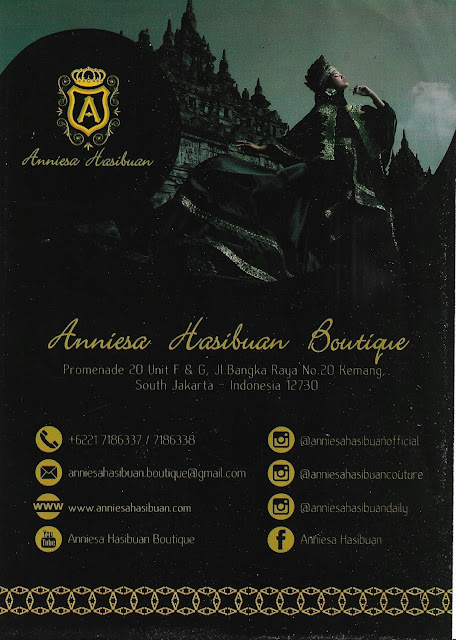 It was in the news over the last couple of days: Indonesian 'modest wear' designer (known in Indonesia as busana muslim)  Anniesa Hasibuan,  the one that had everyone eating out of her hand at New York Fashion Week 2017, the one who was hailed as an extraordinary designer and as the first to put elegant hijabs on the New York runway, the woman who dared challenge Trump by using only immigrant women as models, was jailed with her husband for 18 years for fraud and money laundering to the tune of  US $60 million.
No one had ever heard of Anniesa in Indonesia prior to 2015. She and her husband used to be food  street sellers, then she suddenly opened a luxury outlet in South Jakarta (which I visited in 2015, it was right where I was lodging in Kemang)  and then flew to London first then New York to present her collection. She pilfered looks (Dian Pelangi, established busana muslim designer had a war of words with Anniesa on Instagram as it seems Anniesa had copied some of her looks),  adapted others, paid people  to work for her, paid to get a slot in London and New York and once in New York she could fool everyone because no one knew any better, as indeed no one did at Cannes, where she was given a prize. She even made, in New York, the grand gesture of employing non-professional models who were immigrant women, as a protest against the Trump administration. No one seemed to mind that the  non-professional models were in all likelihood not paid or paid a pittance. And please note she did not even wear a hijab until she decided to reinvent herself as a busana muslim designer, having rapidly understood that modest wear  was a trend with the chance to make big bucks. 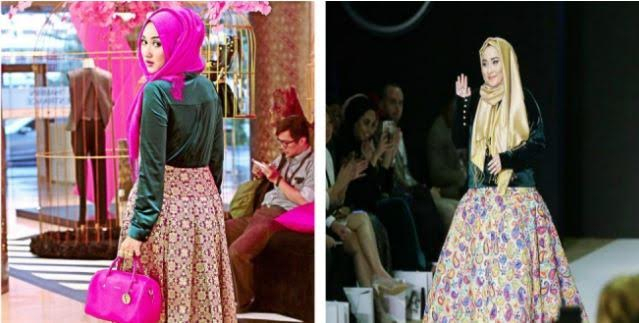 No doubt Anniesa is a smart and daring young woman,  for it takes guts to perpetrate a fraud on such a  scale. Her cynicism  is unbounded. It is now known how she got  money to fund her very lavish lifestyle (only first class travel, a dream house, a store that was luxuriously decorated) and she managed to turn herself into the number 1 busana muslim designer everyone thought she was (outside Indonesia, that is, as many in Indonesia had begun to ask questions as way back as 2015). She and her husband set up a travel agency in 2009 for devout Muslims to go on pilgrimage to Mecca except that no one ever went anywhere and the money was pocketed, with advance payments amounting to  $1000 per person  - how the business could last that long totally beats me. She and her husband must have  had connections with organised crime, they also acted as money launderers. But who else was involved?
It's not difficult in Indonesia or elsewhere for that matter to find people to work for you when you pay them good cash, no questions asked. And she did pay well, except that the money was not hers. This is how she created the Anniesa Hasibuan label.
The general public may not be aware of it but there are agencies, mushrooming around fashion weeks,  that for money, evidently, recruit designers from developing countries to present their collections at a fashion week in a fashion capital. A designer friend of mine in Jakarta - a real one, whose looks were also copied by Anniesa - told me that she had been approached to present her collection in New York and to make the thing more attractive they had mentioned that so and so and another so and so was also going to participate. She was told that upon payment they would 'guarantee' her a show at NYFW.  She refused as she did not want to pay that kind of money and was busy anyway.
Anniesa Hasibuan is an interesting case through which the ills of the fashion industry come to light. She could make it as a busana muslim designer because especially in Europe and America people don't know much about it and have no reference point. In addition, Indonesia has such a rich textile tradition, it is possible with minimal patterning, using only draping, and throwing in a hijab, to create a half decent look. If you get a small team of seamstresses and tailors and provide them with examples you can easily create a collection. When I was in Jakarta in 2015 I went to a small tailor shop and asked the people there  to make me a dress with some material I had bought. I still have the dress and wear it from time to time. I could go round saying I have designed a dress... 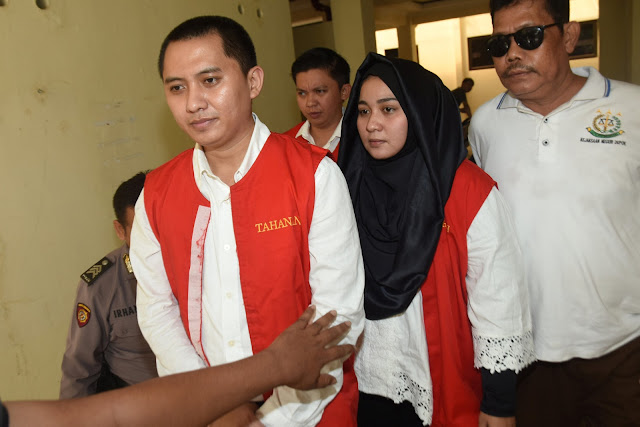 Anniesa Hasibuan and her husband after being sentenced. Photo: Antara/Reuters

We know that even in Europe and America some designers in charge of fashion houses and brands, some creative directors, are no designers themselves, they totally rely on their team even to produce sketches. Anniesa Hasibuan was able to turn this particular business model to her advantage, she clearly had paid some attention to its dynamics. Or someone linked with her must have. 'I am self taught' she used to say. On top of it she was willing to pay handsomely to gain exposure. Had the money not been obtained through fraudulent means, she would have got away with it, as many have, who may have been related to a famous designer and taken the helm of the brand at his/her death or who may have been shrewd business people, with capital, able to start at the top by assembling the best of teams.
Unfortunately the people Anniesa stole from were not willing to go along with the charade and asked for their money back. Indonesia used to be (and still is) a country where corruption reigned supreme, which is the reason why its former president was deposed in 1998, however, what has changed since that fateful day is that there are now opportunities for people to denounce corruption and fight it, whereas earlier it would have been much more  difficult.
It is truly outrageous that an acclaimed modest wear fashion designer and an advocate for a lifestyle of luxury for conservative muslim women should have financed her dream stealing from devout muslims wishing to go on pilgrimage. Busana muslim is meant to be ethical. Stealing hardly qualifies.
What lessons can we learn from this? It is high time that the systemic corruption of the global fashion industry should be denounced and the fashion week business model should be ditched. It certainly should not be based on how much money designers are willing to pay to present their collections. I also remain convinced that there is more to this case and that Anniesa Hasibuan is a fraudster, but also a victim of sort.  Unfortunately, I have to leave it at that.