Pregnant with meanings and fashionable questions 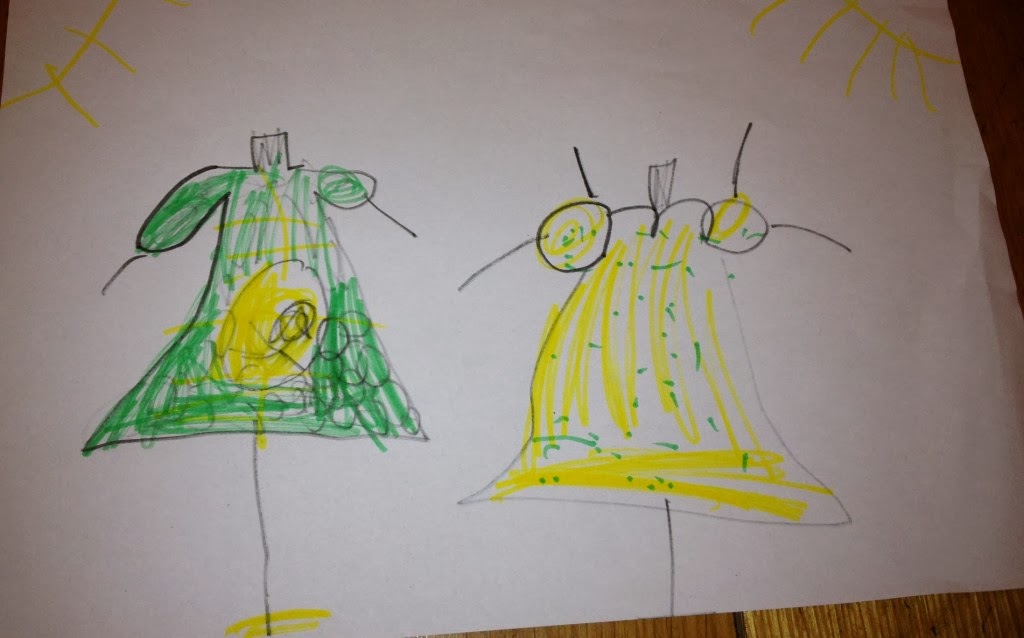 ...is a very thought provoking blog post by Christina Kostoula over at All Walks Beyond the Catwalk.

I love her take and love the drawing by her six year old  daughter, Vava, who 'designed' clothes for Christina to wear.
Christina wrote this  post just before giving birth to her lovely Chryssa on 17th February.
She discusses how pregnant women's bodies are perceived and asks some very pertinent questions, which will resonate with every woman who has ever been pregnant.
I invite you to read her post and comment.

(the lovely drawing is by Christina's daughter Vava)

I happened to watch Big Ballet the other night, the Channel 4 TV reality show about Wayne Sleep's latest project, which is about getting rather large women (and a few men too) to learn a ballet choreography based on the classics  and perform it. We are talking about properly large, several dancers were size 18-20.
Sleep is adamant that ballet is for everyone and its normative lithe and slim body must be challenged - conventions are just that and not immutable. He cites himself as a case in point, as he forged a career as top ballet dancer despite being very short, only 5'2 (but very flexible and slim). "I learnt to jump higher than everyone else" he says.
I have found the programme very interesting. It did challenge my preconceptions and it raised questions that I am at a loss to answer.

Ironically, before watching this programme, I happened to watch Supersize vs Superskinny which is about encouraging extremely obese and extremely skinny people to improve their diet and be less extreme. Could the supersize woman featured in the latest episode have been a good Odette? She certainly had the size Wayne Sleep seems to be after.
What Sleep proposes is not easy to embrace, if we are talking about professional performance. Ballet dancers are known for their extreme flexibility, their rigorous training, a body that they sculpt through constant practice and exercise. Ballet is a shape oriented dance form, the dancers do not just move gracefully and with ease, they also use their bodies to create shapes and these shapes are dominated by elongation and extension.
Ballet has changed through the decades and become very athletic and physically demanding. It was Balanchine, among others in the 20th century, that favoured elongation and had a preference for very slim, long legged, tall dancers - height was not regarded as a virtue in ballet prior to Balanchine, it seems that Audrey Hepburn at just 5'7" was thought as too tall to be a ballet dancer, despite her grace and elegance so she embarked on a career as an actress though continuing to train with Marie Rambert for many years.
Larger dancers can indeed be very graceful in their movements and it is a fact that 19th century ballet dancers were plumper than today's ballet dancers, nor was the technique back then as demanding and the training as gruelling as it is today.
Is  Sleep advocating a return to a different kind of ballet, one which is perhaps less shape oriented and less athletic? Or is he simply making the point that dance is good for you and everyone should dance, regardless of their body size, but not at a professional level, in the same way that large men with flab do play football but whether they make it into a professional team is a different 'game' altogether.
Elongation and plumpness do not go together well, nor is extra body fat helpful for flexibility. If you take away these two elements, flexibility and elongation, are we still talking about ballet or is it another kind of dance? And what about the lifts that are so much part of a ballet choreography, involving aerial work? Can a very heavy dancer cope with them? 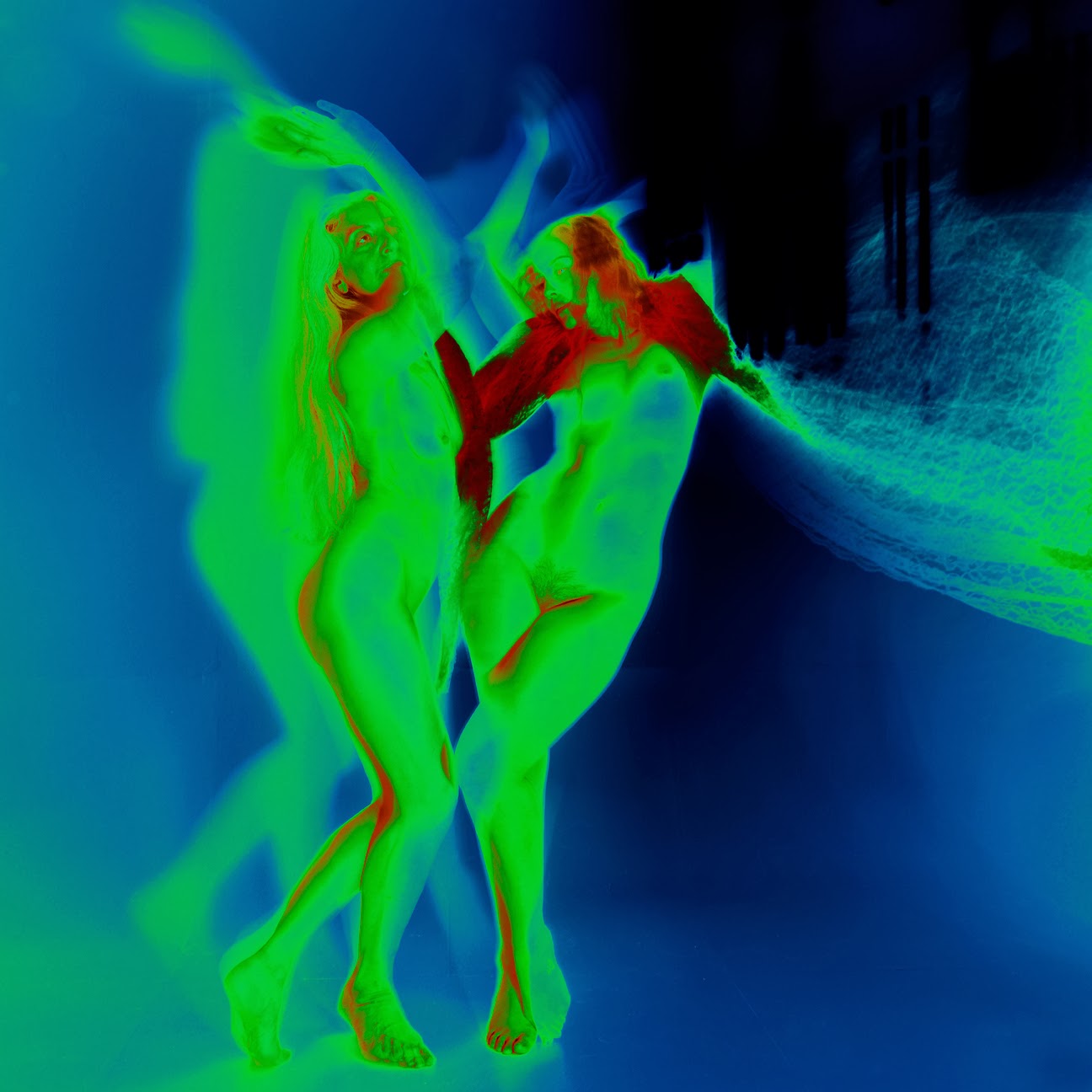 When Wayne Sleep says that being short put him at a disadvantage, the situation is not really comparable. His lack of height did not prevent him from achieving the required flexibility and speed and, being well proportioned, he could still convey length through his movements.
As I was mulling over this, I suddenly thought of what designers say with regard to body shape and why they need skinny models, because they are like hangers for the clothes. I passionately believe that it is still possible to have wonderful design work shown on bodies that are not super skinny. Conversely, should we not have different kinds of ballet? A size 20 dancer may be extremely ill at ease performing a Balanchine choreography, but might be able to dance a piece that enhances other qualities, such as expression, rather than shape and body flexibility.
I doubt traditional ballet choreographies would suit a very large dancer, but maybe newer ones?
I am still trying to come to terms with my own ideas of Odette as slim, petite, flexible and virtuosic in her dancing, a beautiful swan. But I am willing to be challenged by a heavier, slower and much larger swan. Maybe not quite a swan, really. After all what matters is the romance of the story and the tragedy of the star crossed lovers so we could have, well, elephants rather than swans. Who says that elephants are not graceful and majestic? Or hippos? Do you remember Fantasia?


There are certain activities for which weight does matter. Jockeying is one of them. A heavy weight jockey would not be able to race and the poor horse would struggle. Likewise, there are some features of ballet which cannot be executed by very large bodies.
Let's not get carried away with political correctness.

Models own image: the ethics of fashion photography 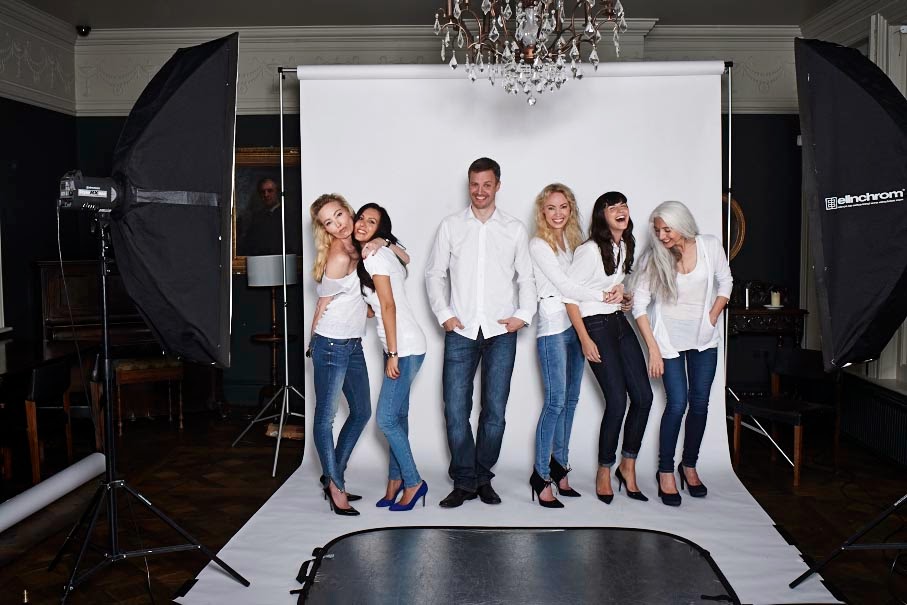 We are relaunching Equity Models Network and All Models across the board are invited. That means YOU! The event will consist of an open meeting, giving you the chance to be heard as a model, and creating better working condition, safety and new standards in our industry. We will give you an insight in what we have done and working towards.
Our main topic is: Models' Own Image: The ethics of fashion photography Models knowing there rights regarding images and photography, the future of Models in photography.


Please join us! click here to RSVP this invitation 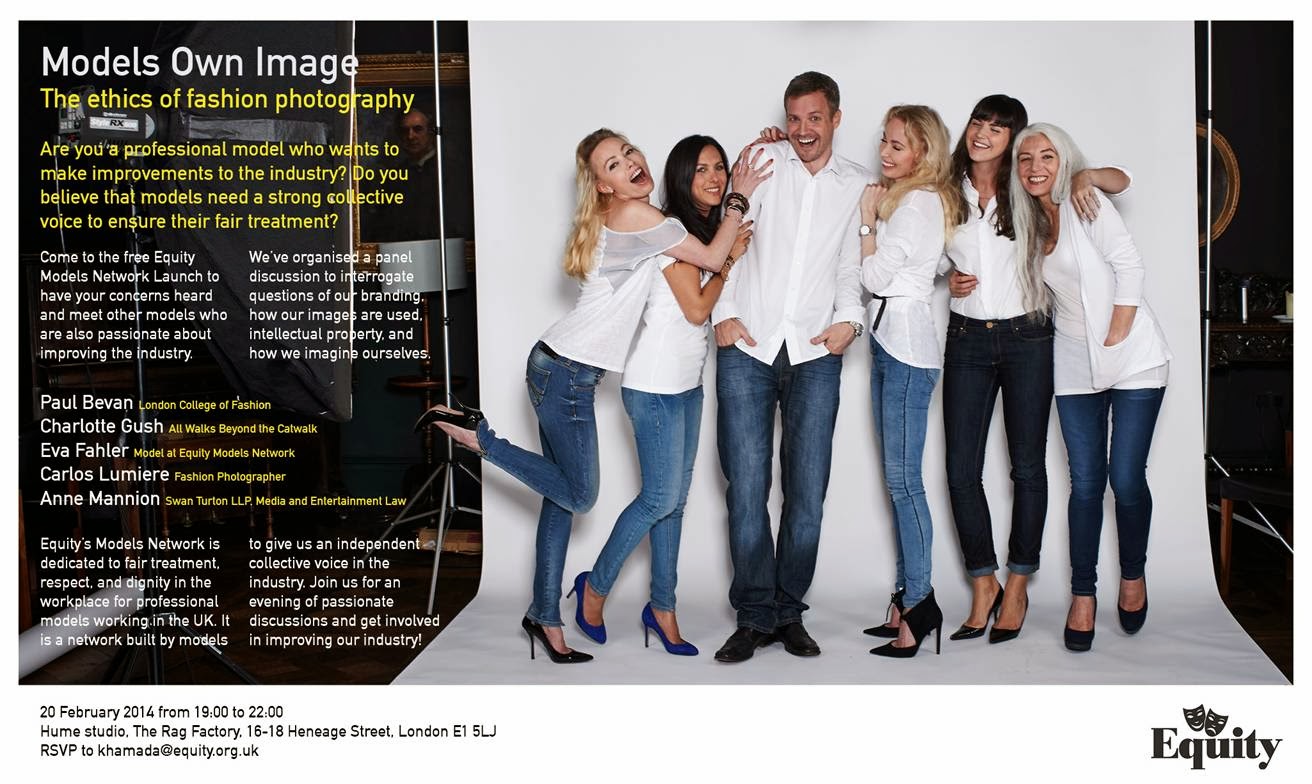 Fashion: is it art? 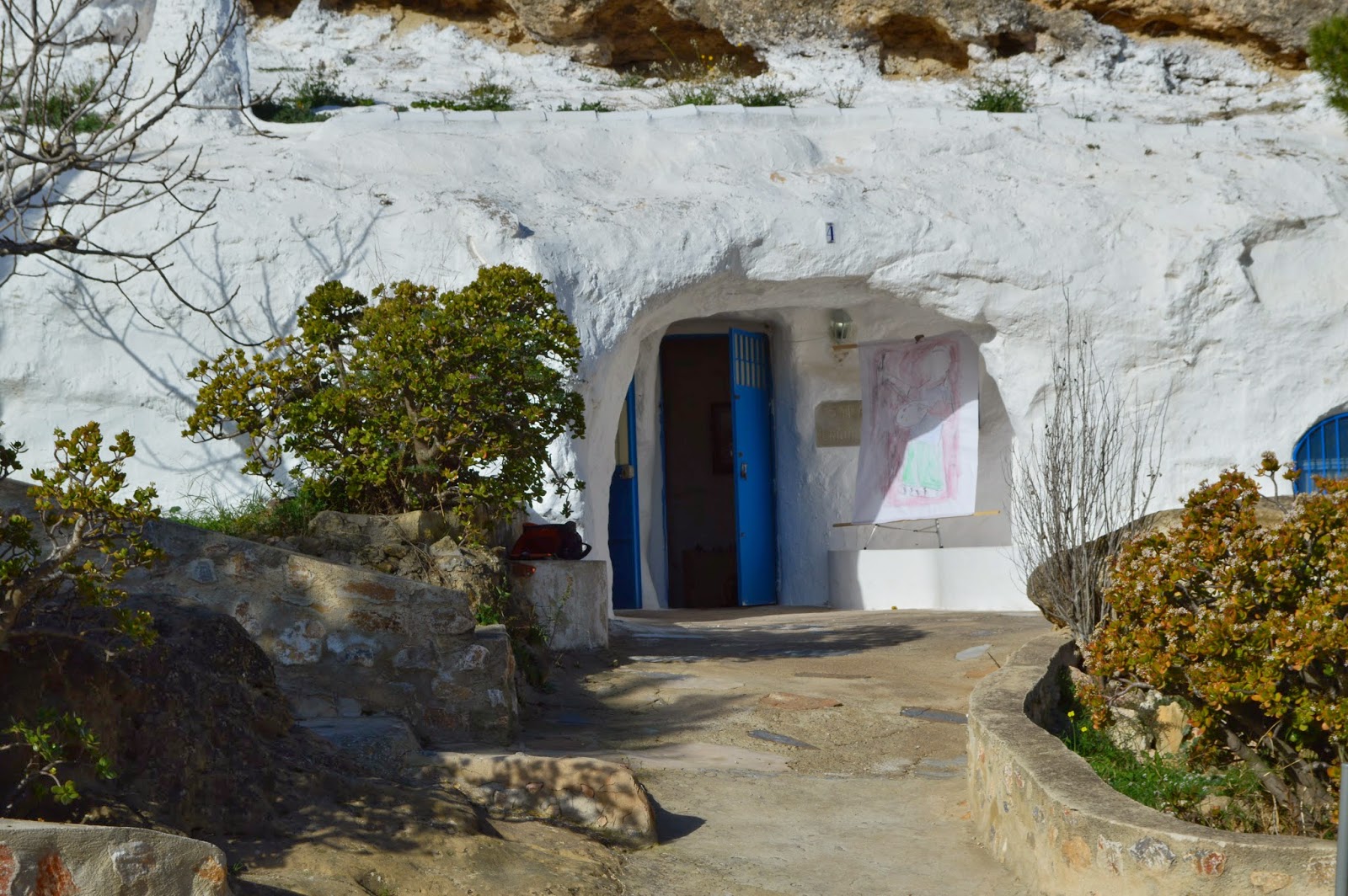 I am back from Spain where I modelled for Martin Robinson's weekly workshop and did, additionally, a session at the Rojales Artists' Caves, where Martin had an exhibition of his work and where he did a life drawing demonstration.
I miss the lovely weather already! I even had fun prancing around in a belly dancing costume which Martin had lying around - some of his models have posed for him wearing it. 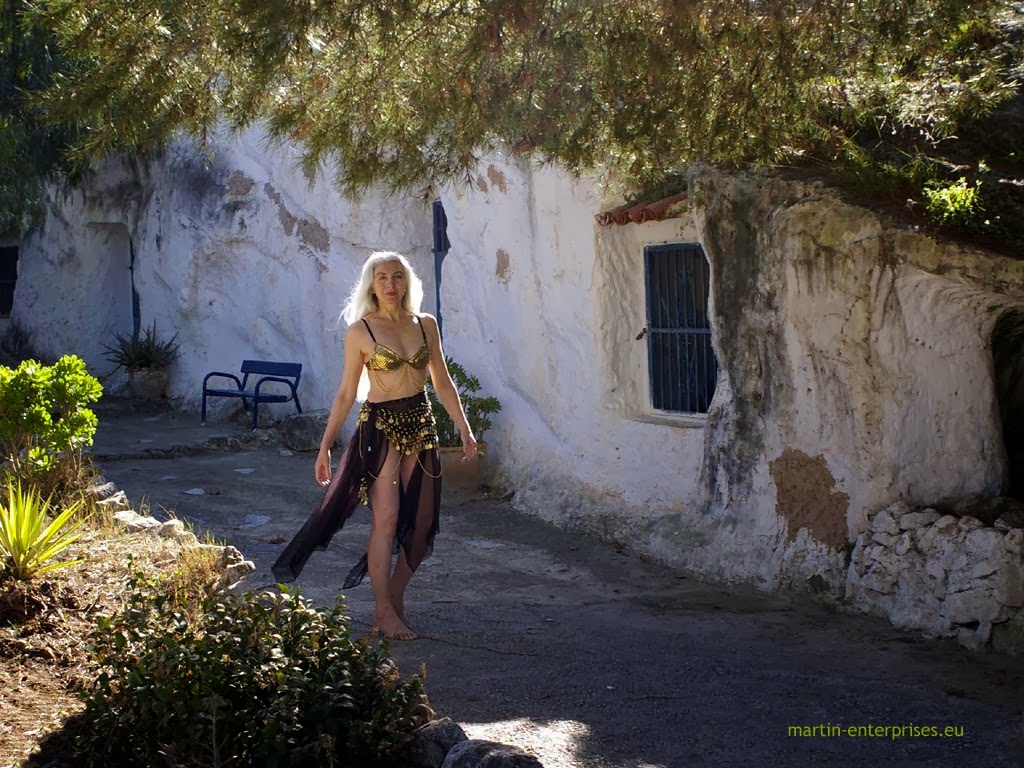 At the weekend I had a conversation with a couple of friends and the question came up of whether fashion is art. I feel rather uncomfortable with the notion of a hierarchy of the arts  -  the disciplinary field  of 'visual culture' came about in the 1990s, taking stock of the changes instigated by the work of people such as Warhol, Rauschenberg, Sherman, Kruger, Prince, Wall, Viola, Crewdson, and street artists, all of whom deconstructed 'high art', effecting interesting cross-overs with popular culture.
But the question 'is it art?' continues to be asked in connection with fashion, and for fashion, to be anointed as 'high art', seems to be a crucial aspiration.
For fun, I ventured a poll through my deviantArt account. The poll is still active, I have not closed it. Why deviantArt?  dA is a platform - I quote - "that allows emerging and established artists to exhibit, promote, and share their works within a peer community dedicated to the arts". I realise that it is made up mostly of amateurs (but not exclusively) but it still allows one to hear the voice of people who position themselves as artists. It also has a global remit.
So far I have had 51% replies supporting the statement that fashion is art. 12%said fashion was an applied art, 10% reckoned there was no hierarchy between the arts thus by default fashion is art, 10% chose to say 'depends', 7% said no, 7% admitted it could be were it not for the hype that surrounds it, 2% emphasised that fashion is primarily a global  industry, a consideration that makes any speculation on fashion's status as art devoid of meaning. 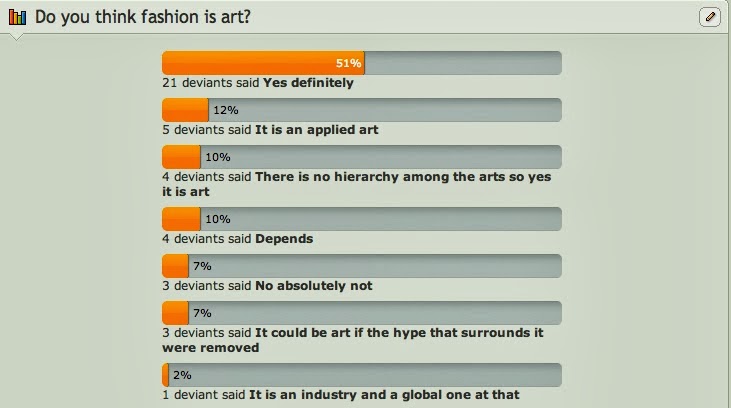 Intrigued I began to look around for articles and books that could throw further light on this matter. Virginia Postrel discussed  in The Wall Street Journal in 2010  the incorporation of fashion at the Lincoln Center.  Was this a move to validate fashion's contribution to culture?  According to Valerie Steele, the director of the Museum at the Fashion Institute of Technology, whom Postrel quotes, "Fashion is really seen as the bastard child of capitalism and female vanity."
In an essay included in the collection Fashion and Art edited by Adam Geczy and Vicky Karaminas, Steele makes the uncontroversial point that "it is impossible to answer the question of whether fashion is art without reassessing the definitions of both art and fashion" and later reminds us that "both fashion and art are aspects of visual culture, involving form , colour, and texture".

It is a question that to some extent will never be answered. Perhaps it is the wrong question altogether. Rather than trying to decide what is and what is not art, rather than discussing where boundaries should be put in place, we might want to consider points of convergence and how the study of fashion can enrich the study of culture.