Changes in the world of glossies: Enninful and Chambers 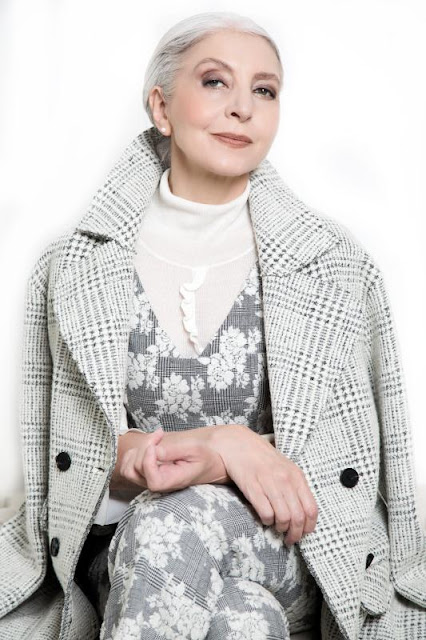 From Robyn Hung's lookbook Model: me photo by Stephanie Dray

It's been in the news quite a lot. Vogue UK has a new editor, Edward Enninful OBE, who was appointed in April 2017 to take over from Alexandra Shulman and Lucinda Chambers, a fashion director for the magazine, is one of the casualties, as Enninful prepares his makeover, giving notice to some of the  old hands. Chambers gave an interview to Vestoj, an online fashion journal (I wrote for it last year, about older models) and in the article, with a hint of bitterness and much anxiety, she describes her predicament and advocates for a glossy magazine that is both useful and aspirational, lamenting that glossies nowadays are no longer useful and present a fashion that is irrelevant. The interview was withdrawn and then republished with  amendments, as some of Chambers' statements were rather incandescent,  and unacceptable to Conde Nast's  and Enninful's lawyers.
It's hard to lose one's job at age 57, even when one has agreed to step down, and the concerns raised by Chambers are very valid, I would certainly not dismiss them. But change at Vogue UK was overdue and I cannot help feeling some excitement when I think of the new direction that Enninful - a Londoner of Ghanaian origin; a former model; one of the youngest fashion editors at I-D magazine in the 1980s; editor of WMagazine until his Vogue UK appointment -  overall  a highly respected name in the world of fashion, will be taking.
Glossies need to change to be more in tune with the times, bridging the gap between their online and print version, for example. Unlike others, I do feel that Enninful, by enlisting the help of models such as Kate Moss and Naomi Campbell as contributing editors, as well as director Steve McQueen (of 12 year a slave fame)  and the inimitable Grace Coddington, promises a major overhaul of Vogue UK. Moss already contributed to Vogue UK anyway, when Alexandra Shulman was at the helm.  Signing Moss up is a recognition of her role as influencer, even though Moss  does not do social media.
With Enninful, the magazine will embrace diversity, at least one hopes it will, and to me this is a way of making it relevant to today's fashion and a true mirror of its global dimension. 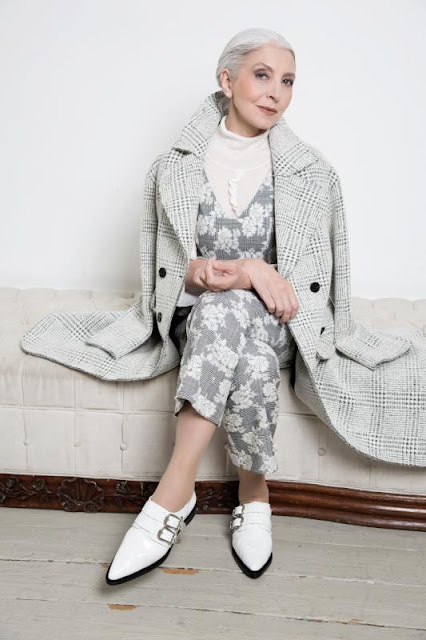 (Speaking of which I would like to signal the tremendous changes being brought by a new cohort of Chinese designers, sleek, well trained and with fresh ideas. I saw some of them at Graduate Fashion Week this year and I modelled for Shanghai based Robyn Hung A/W17 Lookbook, with its very classy clothes.  The rise of Chinese designers and their novel  approach to a diverse, global fashion is to be commended. We saw that already at LFW 2015, when fellow model Frances Dunscombe, at the time 82, walked for You Jai Jin).
If fashion glossies are to be useful, as Chambers would like them to be, then it is very important that they should take a less conservative and less predictable take on fashion. Shulman's directorship  was characterised by  middle-of-the-road cautiousness, Enninful is more flamboyant and daring.
I have always been in awe of the late Franca Sozzani and her vision, which made Vogue Italia,  to which Enninful was a long-time contributing editor, the enlightened publication it was.
Enninful recently tweeted about the July 2005 issue of Vogue Italia, a "commentary on the world's obsession with plastic surgery". 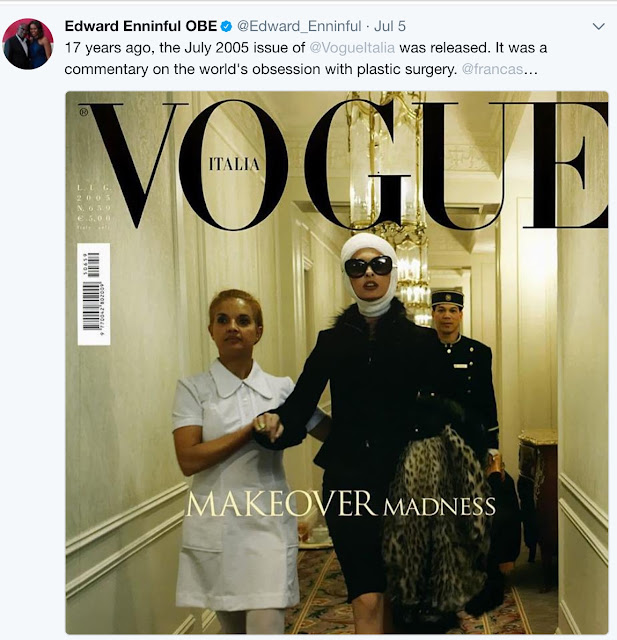 I look forward to the new Vogue UK.  And I am sure Lucinda Chambers will find a way to tap into her very considerable skills and experience to forge a new career for herself.
I know something about changing career in your fifties: I quit my position as an academic a few years ago to start anew as a model, a blogger and a freelance writer.
Life goes on. Perhaps Chambers will follow in the footsteps of other fashion commentators and become an academic? Fashion colleges would definitely need her expertise.